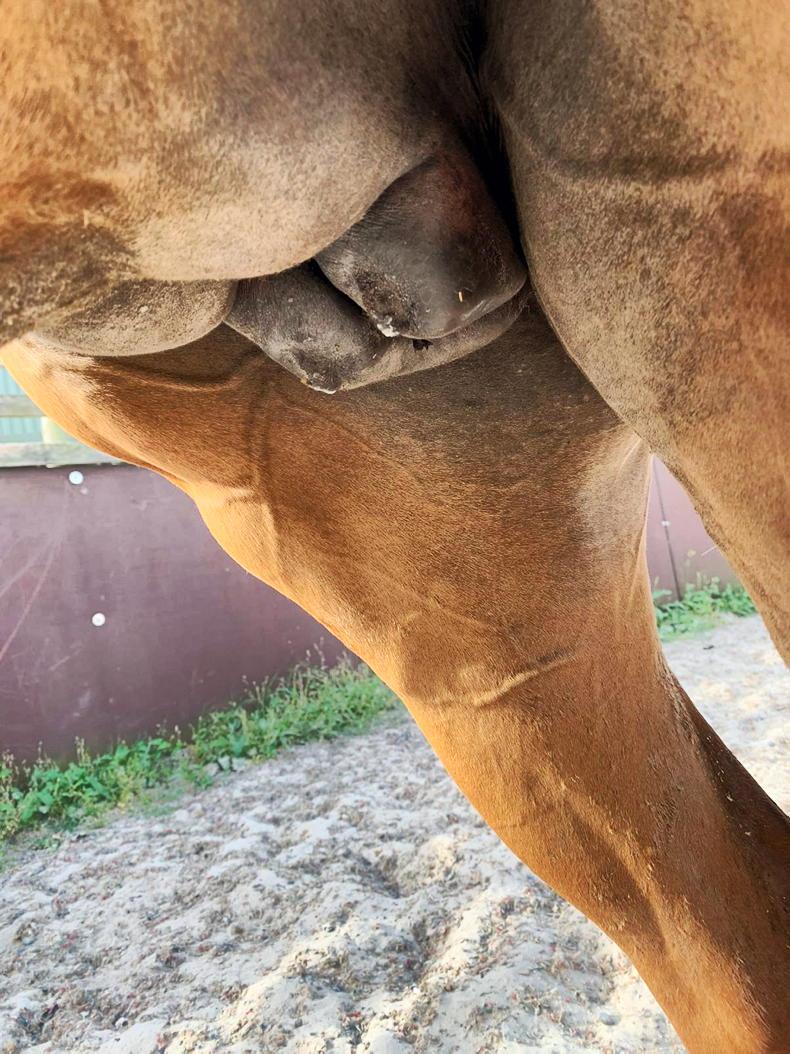 Mastitis caused by insects in a four-year-old mare \ L.Smith

MASTITIS refers to inflammation of the udder. It’s a lot less common in mares than cattle, but it’s a condition that horse breeders will nevertheless likely be familiar with. Once a mare is producing milk, her teat ducts are open and bacteria can sometimes travel up them from her skin and into the milk-producing tissues. The result is a swollen and painful udder, sometimes with swelling extending along the belly. One or both halves of the udder may be affected and an early warning sign may be a foal nursing from only one side.

Dark, shiny teats and a soft, symmetrical udder are indicators of normal nursing and milk production. Once a foal stops feeding, the teats become dry and pale grey in colour and the udder starts to fill up and swell (this could also indicate sickness and a loss of appetite in the foal, so don’t ignore any potential alarm bells!). The mare may move stiffly on her hindlimbs and have an elevated body temperature. The milk also changes – a watery consistency with pus or clots in it is common. As the condition progresses attempts by the foal to nurse are often rejected due to pain, which in turn leads to a further accumulation of milk and more discomfort.

Risk factors for the development of mastitis include recent weaning or the loss of a foal – switching to a low energy (‘hay and water’) diet at this point can help milk production to stop more rapidly. Mares without a foal at foot can also develop mastitis, typically due to either trauma to the teats/udder or biting insects.

The relatively small size of the equine udder and its location high up between the hindlimbs (within easy reach of a well swished tail!) helps to reduce the incidence of mastitis relative to other domestic grazing animals. Foals nurse frequently so the teat canals are constantly being rinsed out as the milk passes down them. Furthermore, mares are rarely milked commercially or by hand, so there is a low incidence of mechanical teat damage.

Treatment consists of the administration of pain relief and anti-inflammatories and the vet may collect a sample of milk or fluid from the affected teat(s) to identify the specific bacteria involved and help in the selection of a suitable antibiotic. Frequent hand milking helps to remove excess fluid, bacteria and dead cells from the udder, but the mare may have to be sedated initially if she is very uncomfortable. Hot packing or cold hosing can also provide some pain relief.

Make sure that all equipment and hands contacting the udder are washed well before use. Place the mare in a clean and well-bedded stable to reduce irritation by insects and allow her to rest. Gentle exercise, e.g., hand-walking or turnout in a small paddock (away from flies) may be beneficial to help reduce the swelling, but check first that the mare is comfortable enough to tolerate this.

Most mastitis cases respond rapidly to treatment and will resolve completely within five-to-seven days. It’s important to complete the full course of any prescribed treatment, to reduce the risk of any lingering inflammation within the udder. Extensive scarring or a reduced capacity for milk production in subsequent years is very rare in horses.