"Reopening saunas at the racecourse would be advocating, facilitating and encouraging the use of something which we know to be unsafe." 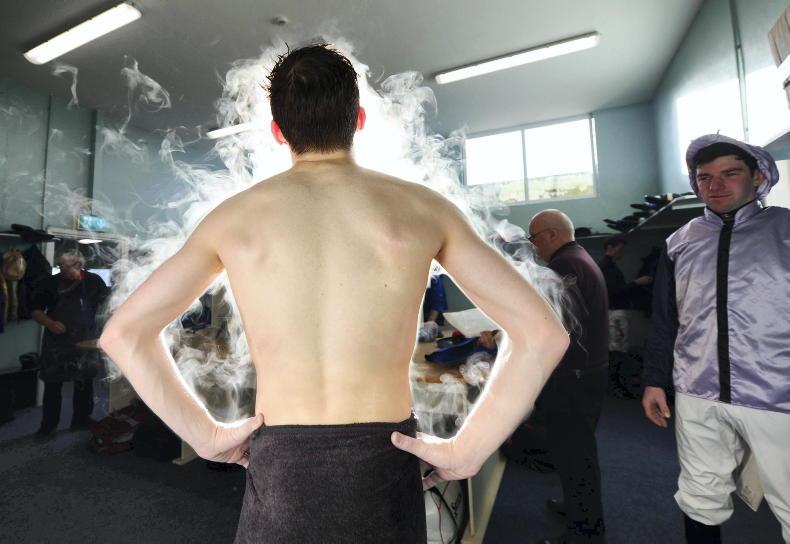 Racecourse saunas will close permanently in May \ Healy Racing

The news broke on Monday and has divided opinion between jockeys. Senior jumps rider Sean Flanagan has resigned from the Irish Jockeys Association over the issue and says the move will encourage some jockeys to sweat either at home before they go racing or in their cars on the way to the track, which is potentially more dangerous.

Weighroom saunas were closed for health and safety reasons when the pandemic hit and jockeys were given a 2lb weight allowance in return. To compensate for the closure of the saunas in May, the current 3lb body protector allowance in place will increase by 1lb. In the meantime the minimum riding weights have also risen on the flat and over jumps by 2lb.

Asked yesterday if she had concerns over jockeys replacing saunas with other unhealthy weight-loss techniques, Dr Pugh said: “While I am not advocating that any jockey dehydrates, I do know this is happening. Reopening saunas at the racecourse would be advocating, facilitating and encouraging the use of something which we know to be unsafe.

“Despite some of the commentary about our ‘ill-judged’ decision, I am well aware of the dehydration that continues to occur off the racecourse. The rate at which someone dehydrates is vitally important and so rapid weight loss by use of a sauna immediately before participating in a race is unsafe.

“If jockeys continue to dehydrate at home before racing then evidence suggests losing weight by dehydrating more slowly over a longer period of time is safer for them, the lesser of two evils. The introduction of 48-hour declarations has had a positive impact on weight-making practices in this regard.”

Jockeys’ Association spokesperson Andrew Coonan has supported the move though he accepts many riders were against it.

“It’s very easy to see why riders are concerned,” he said. I remember when we worked tirelessly to get saunas installed at every track. Now I find that times have changed and that the medical evidence tells us saunas can leave jockeys seriously dehydrated. No doubt a time will come when we will say how did we ever allow them to be used for that purpose.

“The key point now is that we must replace the saunas with other supports. Riders need access to dieticians, physical trainers and mental health professional. Already Galway is looking to install exercise machines to help jockeys warm up and get their heart rate up.”

Coonan has suggested that racing authorities could even be legally liable if a jockey who used a weighroom sauna went on to cause an accident in a race through dehydration.

Dr Pugh commented: “Predominantly the decision was taken on health grounds but we are all aware how society is changing. Racing no longer tolerates jockeys riding while concussed, or under the influence of alcohol, or when injured, but we have allowed one in 10 jockeys, across all codes, to race ride in a severely dehydrated state, so there is a responsibility on the authorities to address this.

“Unfortunately a cohort of this generation of jockeys may continue to sweat. I can’t control what happens off-track but I hope that with education and supports, the rise in the weights, and 48-hour declarations, we can see a change in the culture for a new generation, and we will accept that what has been deemed ‘normal’ for so long was actually far from it.”