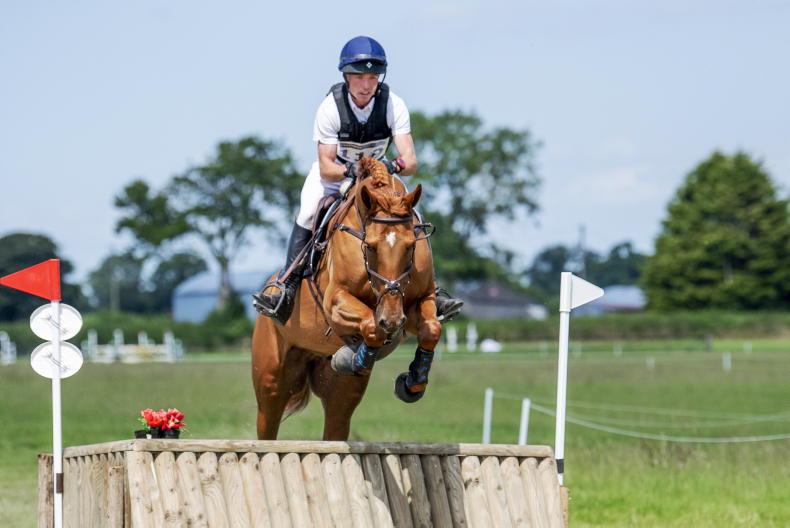 THE sales season moves into top gear next week, as Wednesday marks the start of the Goresbridge September flagship sale. Running over six days, spanning two weeks, the catalogue is similar in size to that of 12 months ago and, as last year, will open with a standalone sector for ponies on Wednesday. The remaining days continue in age order, with the second week devoted to the three-year-olds.

Standing out among the older stock are a good selection of proven hunters as well as competition horses with form. The latter sector includes several event horses with points, as well as a large number of proven jumpers. Friday’s four-year-old sector also looks strong, to feature some exceptionally well-related fillies among which are siblings and close relations to five-star event horses and Grand Prix jumpers.

This broad range of lots is reflected in the varied list of covering sires, which, as it has done for several seasons, is headed by the Kennedy Brothers’ OBOS Quality (15). With six lots forward, the thoroughbred sire Pointilliste flies the traditional flag, while Future Trend, Krafty Clover and Quidam Jnr are also well represented with four apiece.

(A preview for the second week’s three-year-olds will be featured next Saturday).

Lot 19 Kurls Boy, reg 6yo gr g 148cms by Caherlistrane Bay out of Pontoon Beauty (Robe Dark Knight). One of a number of the native breed, this gelding has mileage in several disciplines. Guaranteed an easy ride, he has competed in the RDS performance qualifier at Forth Mountain, has hunted with the Conna hounds for two seasons, and taken part in all pony club activities.

Lot 20 Rathskeagh Duke, reg 4yo dn g 1.48cms by Gwennic de Goariva out of Royal Chestnut Duchess. Another carrying the fully warranted tag, this correct young pony is described as having the potential to become a top jumping pony in the right hands. Being out of a grade A jumping mare and by a top jumping sire, he is certainly bred for the job and is ready to produce further.

Lot 22 Rulahisu Bingo, reg 7yo app g 14.2hh by Josie Jump out of Lady Kellyann. A grade B show jumping pony with 164 SJI points to date, this fully warranted gelding is currently competing at 1.10m level. While he needs a competent rider to fulfil his further potential, he has plenty of scope and rides well on the flat.

Lot 47 Lockdown Again, reg 5yo dn m 14.2hh by Beagh Lad out of Ballycommon Courtship (Maam Hero). Sadly outgrown, this young mare has already clocked up 23 SJI points. In addition, she has been on the Inter Schools teams, has hunted with the Bree and Ballinagore hunt last season, and is well schooled across country.

Lot 103 HTV Baroness, reg 7yo b m 16.1hh by Quidam Junior out of Baron Lass (Baron de Chantepie). This easy mare has pony club evented, and qualified for the event championships at Tattersalls. She has also competed in the Interschools and attended pony club camp this summer. A mare with serious scope, she has a lovely attitude and three good paces.

Lot 110 The Last Samurai, reg 8yo ch g by Flexible out of Oldtown Katie (Clover Fields). With 57 SJI points to his name, this well-bred gelding is a half-brother to the TIH ISH Approved stallion Oldtown KC and out of the Grand Prix-winning mare Oldtown Katie (1.50m). He has only been lightly competed due to owner’s injury, but has a bright future ahead of him.

Lot 137 Mr Quality Cruz, reg 7yo ch g 16.2hh by OBOS Quality out of Miss Carnival Cruise (Cruising). One of the standouts in this division, this fully warranted event horse in the winner of 10 Eventing Ireland points to date. He has headed his class at EI 100 level and on upgrading was placed third in the EI 110 class at Rosanna this May. Carrying a good record in all phases, his results include five top-eight placings, as well as two completions at CCI2* events.

Lot 160 Kilkeeran Prince, reg 6yo ch g 15.1hh by Rocky Maguire out of Lizzy Rua. A successful heavyweight show cob, this straightforward gelding has been correctly produced, is a balanced ride and ready for new owner to compete.

Lot 161 Chatsworth Que, reg 9yo ch m 16.2hh by Castlecomer Q out of Clogh Cailini (Diamond Serpent). This fully warranted mare is described as an ideal prospect for the children on horses classes. A low mileage performer, due to having bred one foal, she has clocked up 17 SJI points. She is also well worth breeding from again as she is a half-sister to the top Grand Prix horse Chatsworth Dan and features the highly regarded Diamond Serpent as the sire of the dam.

Lot 164 Erne Blaze Away, reg 7yo b m 16.2hh by Air Jordan Z out of Erne Blaze (Aldato). Another well-related mare, this one has jumped successfully up to 1.40m level to accumulate 49 SJI points under Johnathan Smyth. The dam was a grade A Grand Prix jumper (1.50m) with Francis Connors, featuring alongside several further graded horses.

Lot 179 Dolmen Duty Free, reg 7yo b m 16.1hh by Quantino out of Dolmen Dimension (Dolmen Déjà Vu). An experienced individual and competed by her owner, this warranted mare is the winner of 102 SJI points to date.

All rounders and hunters

Lot 81 Wellview Charisma, reg 13yo b g 16.1hh by Hermes de Reve out of Drumcall Diamond (Carrick Diamond Lad). For those looking for an experienced schoolmaster, this gelding may fit the bill. An easy ride, he is the winner of 161 SJI points to date, he has competed on interschools teams as well as hunted with the Sligo Harriers and Countryside Drag.

Lot 91 Stormy King, reg 5yo ch g 17.1hh by Echo King out of Stormy Madam (Sir Stormy Breeze). One of the eyecatchers in this sector, this gelding is the winner of two Irish Draught performance qualifiers and was placed third in the final at Lambertstown. An easy ride, and fully warranted, he has also racked up 11 SJI points in classes up to 1.10m, and has been lightly hunted with the Killinick hounds.

Lot 124 Midnight Twirl, reg 12yo b g 15.3hh. Described as suitable for both a beginner or an experienced rider, this fully warranted gelding has hunted with the Mullinavat and District Harriers for six seasons. Quiet to handle in every way, he is also a winner of numerous hunter trials and has competed in training shows.

Lot 198 Lough Derg Paddy, reg 7yo gr g 170cms by Ceide Prince out of Merry Gold (Red Navaho). A follower of the Galway Blazers for three seasons, this fully warranted gelding is described as an ideal horse for a master of hounds.

Lot 232 MBF Railway, reg 4yo b g 16.2hh by Ringwood Cassero out of Paddys Pride (Indian River). Offered by regular sale-topping consigners, this young gelding carries a full warranty. Out of a thoroughbred mare, he has three uphill paces, has successfully competed in training shows and is thought to have a very big future as a top event horse.

Lot 233 Bid Point, reg 4yo b g 163cms by Pointilliste out of Kings Pet (Kings Master). A traditionally bred gelding, Bid Point has been placed fourth and fifth in his only two runs (EI 90) under Eventing Ireland rules. Double clear on both occasions, he has three good paces, is schooled well on the flat, and is proving to be very brave across the country.

Lot 243 Unnamed, reg 4yo gr g 16.1hh by Cornet Obolensky out of Quality Star (OBOS Quality). An exceptionally well-bred gelding who is a half-brother to the grade A jumping mare JM Penelope (David Lawlor). Adding further depth, the dam is a sibling to the Canadian-based jumper Johns Flight (1.60m), as well as to the useful event horse Scotfree and the RDS champion mare Cavalier Starlit.

Lot 264 Portlaoise Spartan, reg 4yo gr g 16.1hh by Portlaoise First Tuch out of Roadstown Cruise (Cruising). A progeny of one of Ireland’s highly regarded elite traditionally bred mares, this gelding is a half-brother to three international performers. Among them is the event horse Fernhill Dreamaway (CCI4*), ridden by Tom McEwen, the show jumper Roadstown Lord (1.60m) and Greenforest Hilton. The second dam, by King of Diamonds, has also bred some top jumpers including Town Cruise and Roadstown Prince.

Lot 281 Greenhall Cu Chulainn, reg 4yo ch g 17.2hh by Dunsandle Diamond out of Star Gazer (Gurraun Golden Eye). One for the showmen could be this upstanding individual, who is a full Irish Draught out of a Class 1 mare. A true heavyweight, he could progress either as a show hunter or would also make a top Master’s horse in the hunting field.

Lot 322 Unnamed, reg 4yo b f 16hh by OBOS Quality out of Rocks Imp (Master Imp). Bearing an attractive cross of commercial bloodlines, this filly is also well related. She is a three-part sister to the American-ridden Pan Am Games event medallist Ballingowan Pizazz (CCI4*), and half-sister to both the jumper and broodmare Stardust Sadie (1.30m), and to La Vie En Rose, dam of SRS Kan Do (CCI5*), ridden by Kylie Roddy. Dam is half-sister to Shannondale Titan (CCI5*) who was placed at Badminton in 2014 and 2015 and competed at the World Equestrian Games in 2014. 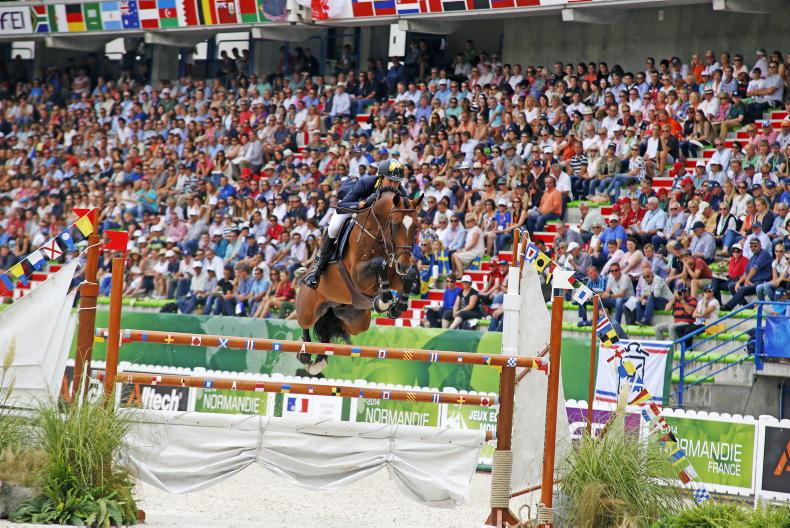 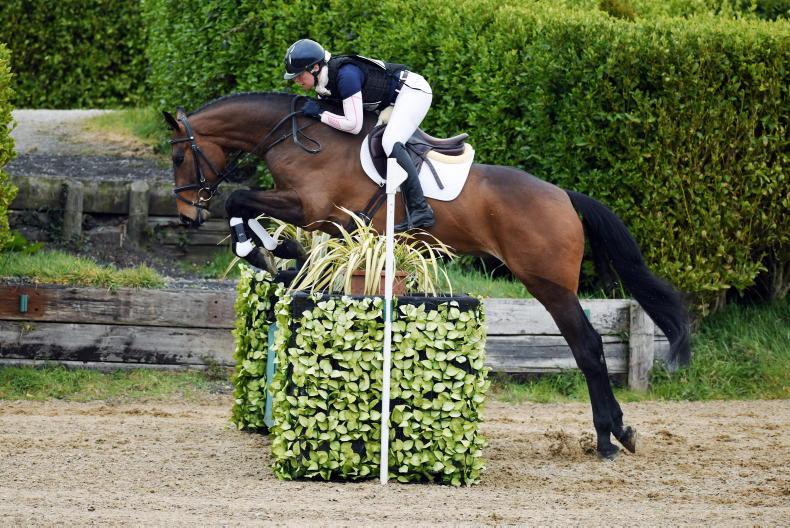 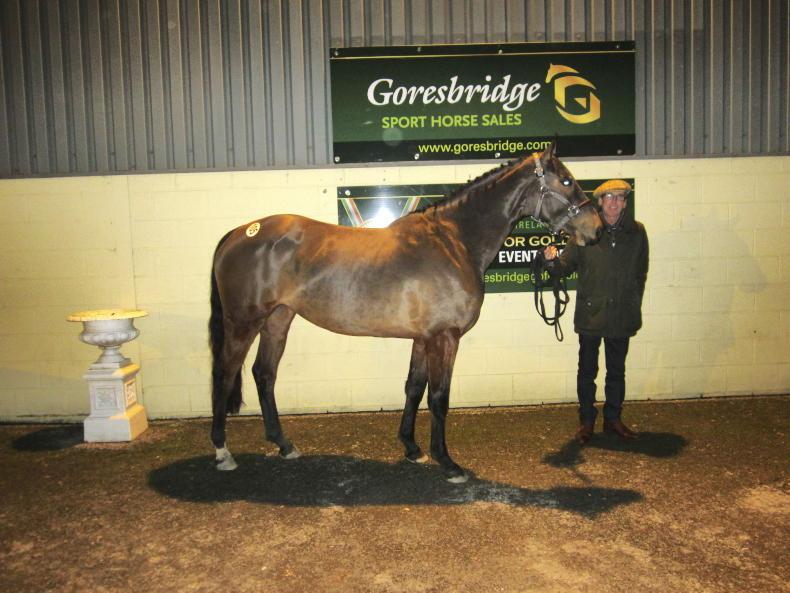 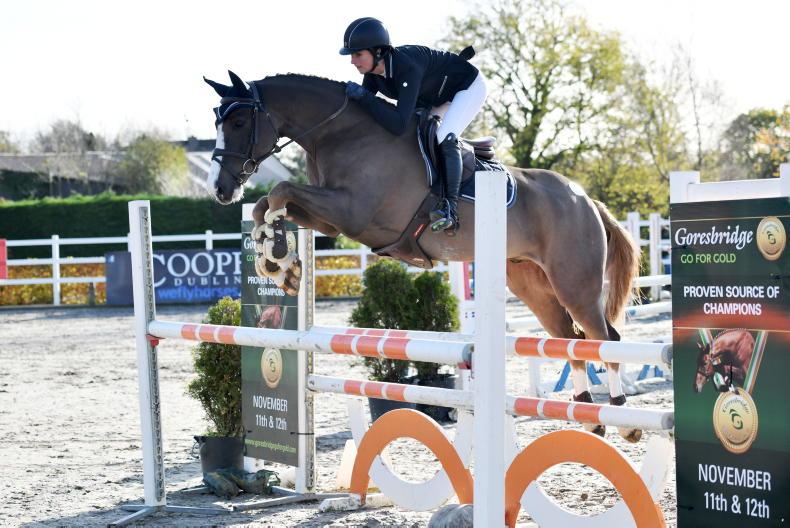