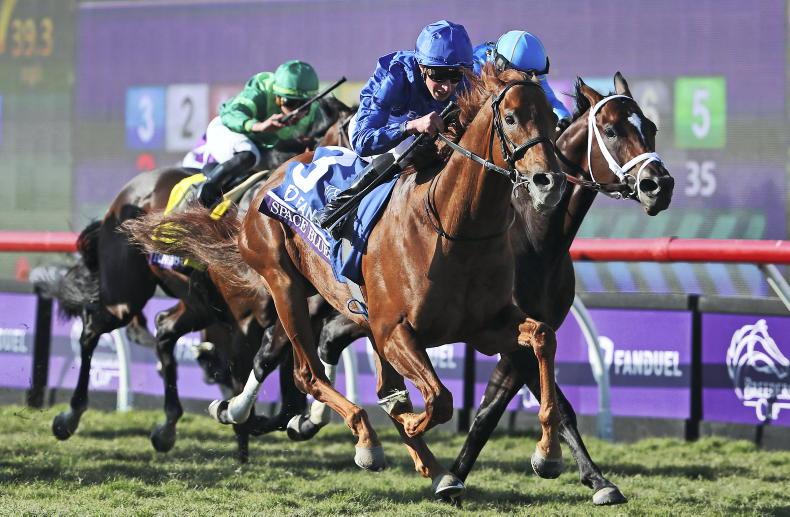 RUNNING a mile for the first time in more than two years, Space Blues collected his third Group or Grade 1 victory with his half-length win over the pacesetting Smooth Like Strait with Ivar third, Raging Bull fourth and Got Stormy fifth.

Buick, the five-year-old Irish-bred son of Dubawi’s regular rider going back to his win in the Group 2 Qatar Lennox Stakes at the 2020 Glorious Goodwood meeting, kept Space Blues close most of the trip before shifting out in the stretch. They caught Smooth Like Strait inside the final furlong and won in 1m 34.01secs.

“I’m absolutely delighted,” Appleby said. “He’s been a fantastic horse and will now be retired to stud. William gave him a great ride in the perfect position throughout. Space Blues has been a great servant and it’s another well-deserved win.”

Space Blues improved to four-for-six on the season, adding the Mile to his win last time in the Group 1 Qatar Prix de la Foret at Longchamp, Group 2 Sky Bet City of York Stakes at York and the STC 1351 Turf Sprint Cup on Saudi Cup Day at King Abdulaziz Racetrack.

“Coming here I knew I had some very good rides,” Buick said.

“Space Blues travelled to America very well and Charlie has been delighted with all of our horses coming into the races. We know how tough it is to come here and everything needs to pan out for you to win.

“He’s a great little horse and I don’t think he’s had the recognition he deserves. A mile round here suits him. I was a bit nervous going into the race as I wanted to give the horse what he deserved.”

Appleby admitted to being nervous and perhaps feeling a bit of déjà vu in the minutes leading up to the Mile when Master Of The Seas, Godolphin’s three-year-old Irish-bred Dubawi colt who just missed in the QIPCO 2000 Guineas this spring at Newmarket, was scratched from his inside post after acting up in the gate.