Zaaki, Mr Brightside and Knights Order all staked claims for the big Cup races this autumn 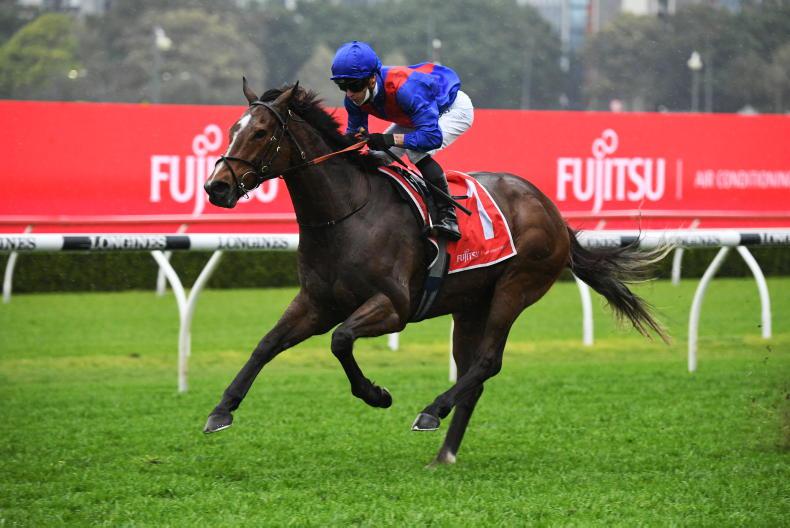 SCRATCHED on the morning of last year’s Cox Plate, the Annabel Neasham-trained Zaaki has a big red circle drawn around October 22nd.

“He’s resumed just as well as he did 12 months ago and arguably there’s more merit to the win with the testing conditions on Saturday,” said Neasham of Zaaki’s second consecutive win in the Group 2 Tramway Stakes over 1,400 metres at Randwick on Saturday.

Last year Zaaki used the Tramway as his lead-off race for the spring followed by runs in the Underwood Stakes (1,800 metres) and Caulfield Stakes (2,000 metres), designed to have him primed for the Cox Plate.

By Leroidesanimaux out of the Sadler’s Wells mare Kesara, Zaaki had little trouble with his rivals, despite the ‘heavy 9’ conditions, posting a two-length win to improve his Australian record to nine wins from 15 starts and A$4.03 million in earnings.

“He has done a really good job at the furlong to kick away with some really good horses chasing him,” said jockey James MacDonald.

“He was idling a fair way from home - he can do that when he is out in front. He switches off but he is a horse that finds under pressure but I couldn’t say that was his favourite ground.”

Looking on the Brightside for the Plate

THE Ben and JD Hayes-trained Mr Brightside has won his way into the Cox Plate via his win in last Saturday’s Group 2 Feehan Stakes over 1,600 metres at Moonee Valley.

Sent out in the ‘red’ at $1.90 in a five-horse field, Mr Brightside took up second behind the Royal Whip Stakes winner Earlswood before cruising to the lead rounding the bend.

Home with ease, the Bullbars gelding won by five lengths ahead of the Reliable Man mare Inspirational Girl and the Noble Mission horse Spanish Mission.

Earlswood faded to finish last, with vets detecting a slower-than-normal recovery rate on examination. With his place in the Cox Plate assured, markets moved Mr Brightside to the third line of betting behind Anamoe and Zaaki.

“That’s his best win he’s done to date,” said Ben Hayes. “He’s only going to improve with the run. As we know, the further he gets into the preparation, the better he gets.

“He’ll put his hand up for the Cox Plate. There is still the option of the Caulfield Cup. We’ll sit down with the team and work it out, but the good thing about having a horse like him is that we can point him at these options.”

A five-year-old, Mr Brightside sold for NZ$22,000 as a yearling at the 2019 New Zealand Bloodstock May Sale before being passed-in on a $50,000 reserve at the NZB Ready To Run sale, has now won nine of 15 including the Group 1 Doncaster Handicap in April.

“You could see his mannerisms in the gates, he’s getting better every time and he’s just doing so many things right but then his performance just shows the calibre of horse that he is and the impressive part is there’s still more to come for this preparation,” added jockey Craig Williams.

THE Irish-bred Knights Order, first-up following his Group 1 Sydney Cup win in April over the Melbourne Cup distance of 3,200 metres, saluted in Saturday’s Group 2 Chelmsford Stakes over 1,600 metres at Randwick.

Bred at Airlie Stud, the So You Think gelding, now deemed an eight-year-old in Australia, was bought for 250,000 guineas at the 2018 Tattersalls Autumn Horses-in-Training Sale by the team of McKeever Bloodstock and Gai Waterhouse.

In the black on the ledger, Knights Order has won nearly A$2 million in Australia and is assured a start on the first Tuesday in November.

Leading all the way, the former William Jarvis charge, railed through the bend to lead his pursurers a merry dance, posting a length-and-a-half win over the Irish-bred Holy Roman Emperor gelding Numerian and the Pins gelding No Compromise.

“Knights Order has stamped himself well and truly as a weight-for-age horse and only a good horse wins the Chelmsford,” relayed Gai Waterhouse post-race.

“It was like a longer race being wet and they didn’t take him on early so it gave him the chance to get into his rhythm. What a versatile horse.

“We have been thinking about Knights Order’s preparation, but we have one race in mind for him and that’s the Melbourne Cup. We will let the dust settle and decide which races he goes to next.”

WILLIE McCarthy and Richard O’Donoghue have been named the joint winners of the Tommy Corrigan Medal which recognises the most outstanding jumps jockey of the season. The pair shared the honours with 10 votes each.

The medal itself is named after the Co Meath-born Tommy Corrigan who emigrated to Australia with his parents in 1864. The Australian Racing Hall of Fame inductee rode in the 1872 Melbourne Cup and had a winning strike rate of just over 30% from 788 recorded rides, though he was best known for his skill over the jumps that included six Grand Nationals Steeplechases wins and one Grand National Hurdle win.

Unfortunately it was in the 1894 Grand National Steeplechase where he suffered injuries that proved fatal.

“You should have heard the cheers, my boys, that shook the members’ stand,

Whenever Tommy Corrigan weighed out to ride Lone Hand.”