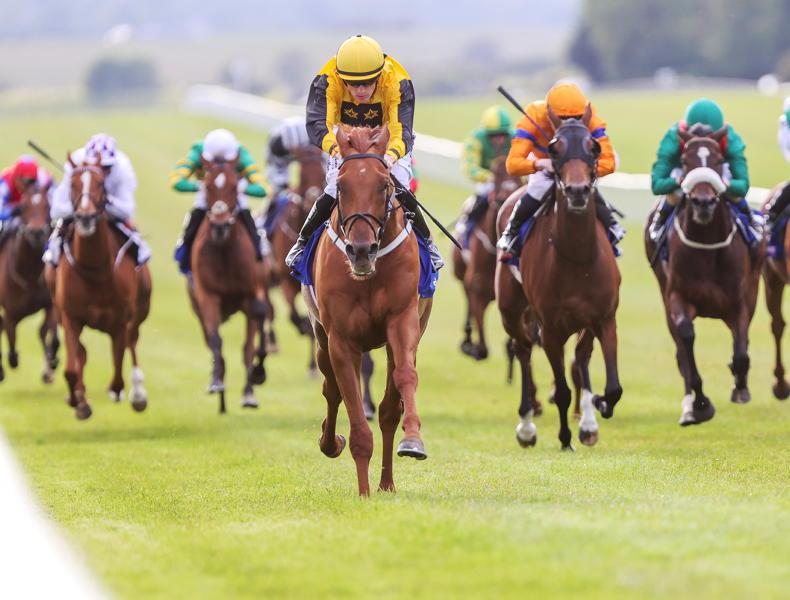 Earl Of Tyrone impresses in winning at the Curragh \ carolinenorris.ie

TALKING of the Knavesmire, Earl Of Tyrone (103+) booked his place in Europe’s richest handicap at York in August with an impressive victory in the Race To The Ebor Handicap at the Curragh on Wednesday week.

Paddy Twomey’s four-year-old made short work of his opponents in clocking the fastest time figure on the evening when adjusted for distance.

After racing handily throughout the mile-and-six-furlong contest, the son of Australia did little more than stretch his legs to cover the final three furlongs in 36.48secs, which compared favourably with Fennela (90) (37.49secs) who won the other round track race in a much slower time and finishing split.

Age Of Kings (90+) was the most exciting of the juveniles on view with his closing three-furlong closing sectional of 34.21secs promising there is more to come as he progresses with racing.

In comparison the next best closing effort was posted by Ano Syra (95) who stopped the clock at 34.55secs in the sprint over the minimum trip.

To complete the data at flat headquarters, Crypto Force (86) finished off in 36.08secs, which was slightly quicker than Markievicz (88) who posted 36.12secs and Aratori (89+) who sauntered to a closing sectional of 36.61secs.

The eyecatcher of the night was Might And Merry (83+) in the concluding handicap.

Having been drawn low, Colin Keane navigated a path to the opposite side of the track before coming home strongly.

Jessica Harrington’s colt benefitted from the application of blinkers to take his record to the Dublin venue to three wins from four visits. The son of Lope De Vega covered the final three furlongs in 37.21secs.

Chicago Bear (94), who stopped the clock at 36.59secs, was slightly faster but Johnny Murtagh’s gelding was far slower overall.

The only other race of note on the evening was the mile handicap won by Focus Required (96) and as the winner closed off from the back of the field in 37.25secs he is the only tracker entry to be made.

Eyecatchers of the Week

Snazzy Jazzy (101), 2nd June, Hamilton: – back to form on his seasonal debut, he can further exploit his reduced rating

Migdam (99+), 4th June, Doncaster: – dominated at finish and looks a pattern-class horse in the making