Both colts were having their comeback run following lengthy absence from the track; Michael O'Callaghan introduced a potential Group 1 filly in the maiden 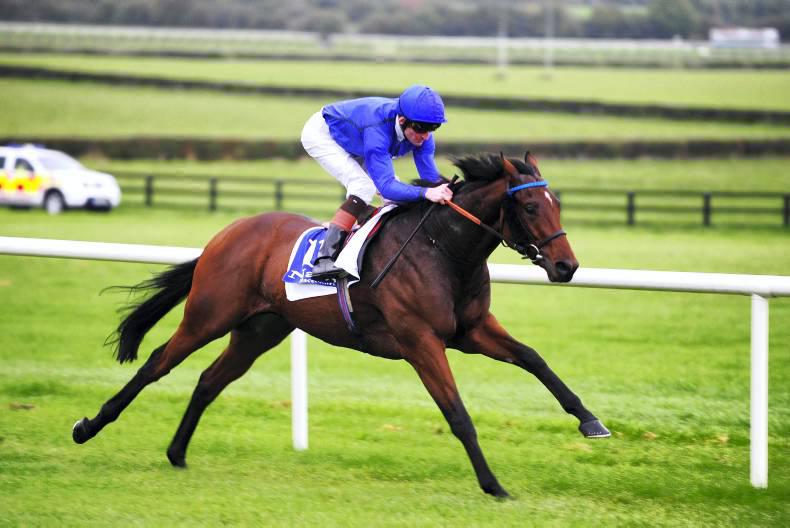 BREEDERS' Cup hero Hit It A Bomb had to make do with minor honours as Tribal Beat claimed victory in the Invesco Pension Consultants Desmond Stakes at Leopardstown.

The Aidan O'Brien-trained Hit It A Bomb was protecting an unbeaten record in the Group 3 feature, but had not been seen in competitive action since completing a hat-trick in the Grade 1 Breeders' Cup Juvenile Turf at Keeneland last October.

Despite his lengthy absence, the son of War Front was a 13-8 market-leader for his belated return and everything appeared to be going according to plan for favourite backers as Seamie Heffernan's mount cruised towards the front entering the final furlong.

However, with the lack of a recent outing perhaps telling, Hit It A Bomb did not find as much for pressure as had seemed likely and he passed the post in third place, just ahead of the sole British challenger in the field, Custom Cut.

Jim Bolger's Tribal Beat had actually been off the track for six days longer than the Ballydoyle runner, with his last outing coming when second in the Group 3 Killavullan Stakes at this venue.

The 9-1 shot was nearer last than first turning for home, but picked up well in the straight in the hands of Kevin Manning to score by one and three-quarters length from last year's winner Cougar Mountain, also trained by O'Brien.

Bolger said: "He's a good horse and a mile or maybe nine furlongs is as far as he wants to go. He has to have good ground or better. He was just held up by small little things - one little thing after another. We have had a good run with him for the last six weeks."

O'Brien was pleased with the performances of both Hit It A Bomb and Cougar Mountain, with the Boomerang Stakes on September 10 nominated as a potential next port of call for the former.

"Hit It A Bomb came there to win but he just got a little bit tired. He will improve plenty for the run," said O'Brien. "He may come back here on Champions Weekend for the Boomerang Stakes over a mile. He will need a run or two to get him right.

"Cougar Mountain is a solid horse and ran a solid race."

Michael O'Callaghan could have a smart filly on his hands after Holy Cat ran out a taking winner on her racecourse debut in the Irish Stallion Farms E.B.F. Fillies Maiden.

The daughter of Kitten's Joy was backed into 11-4 favourite and was always going well in behind the leaders before powering past the pace-setting Alphabet in style when Colin Keane pushed the button. The winner pulled four and three-quarters lengths clear of Aidan O'Brien's charge in style and could now head to the Cheveley Park Stakes at Newmarket next month.

O'Callaghan said: "That didn't surprise me, and she's a very good filly who has never come off the bridle at home. She came from the Breeze-Ups, and got an entry in the Cheveley Park Stakes yesterday. She's probably my best two-year-old at the moment. She is going to improve and is very professional. I don't know how far she will get but I'm delighted to have another winner for Sheikh Fahad.

"He obviously has a big team of horses so we will have to see where she fits into his plans. The Cheveley Park is the only big entry she has at the moment, and ideally she could have another run before going for that. We'll see how she comes out of this race, and she could drop back to five furlongs or go up to seven."

Boylesports introduced her at 25/1 for next year's 1000 Guineas.

Keane completed a double in the same colours of Qatar Racing Limited when the Ger Lyons-trained Brutal (3-1) got off the mark at the fourth attempt in the Irish Stallion Farms E.B.F. (C & G) Maiden with a two-and-a-quarter-length verdict over Diodorus.

Edward Lynam's charge had the race taken off him in the stewards' room at the County Kildare track but made no mistake this time, coming from last place to collar long-time leader Great Wide Open by a neck in the shadow of the post.

Joseph O'Brien got on the scoresheet when Udogo (8-1) held the late challenge of Windsor Beach by half a length in the Boomtown Rats Apprentice Handicap, while Sharliyna (10-11fav) landed the odds for Dermot Weld by three and a half lengths from Truffles in the Irish Stallion Farms E.B.F. Fillies Maiden. 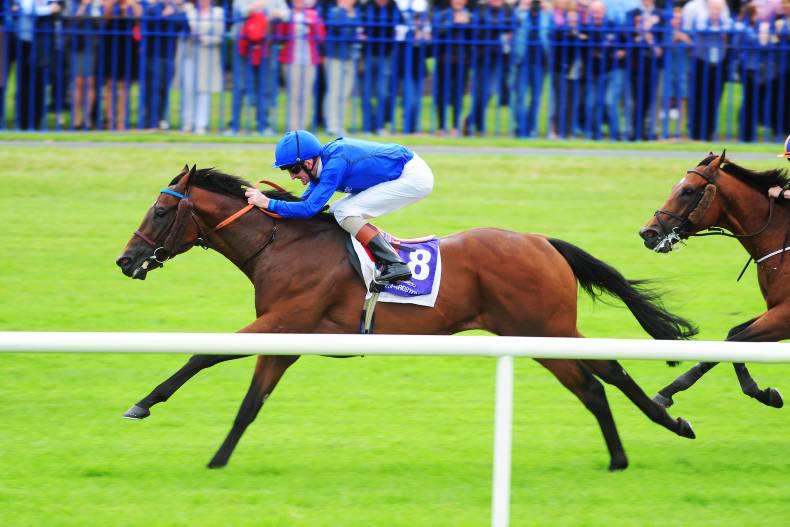 TIME WILL TELL: Tribal Beat decent in victory
Tribal Beat recorded a timefigure of 108 when beating the hot-favourite Hit It A Bomb 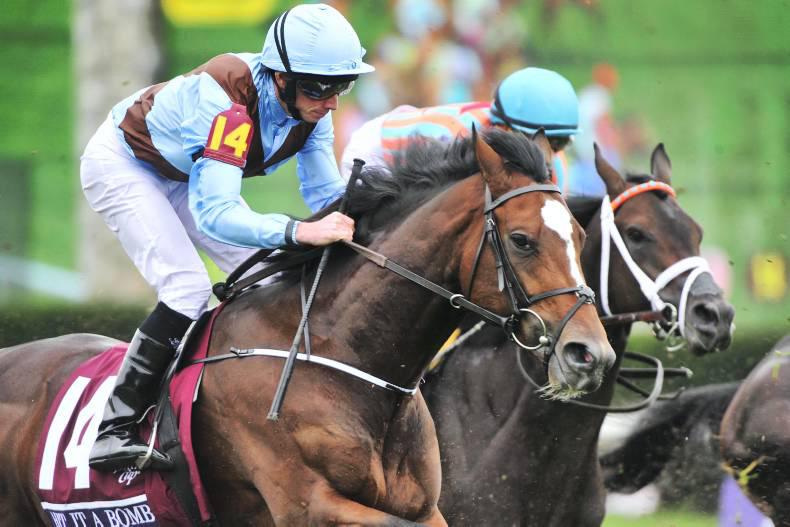 Anne Marie Duff
Hit It A Bomb returns at Leopardstown
Breeders’ Cup Juvenile winner returns to the track; racegoers can enjoy the Boomtown Rats in concert after racing 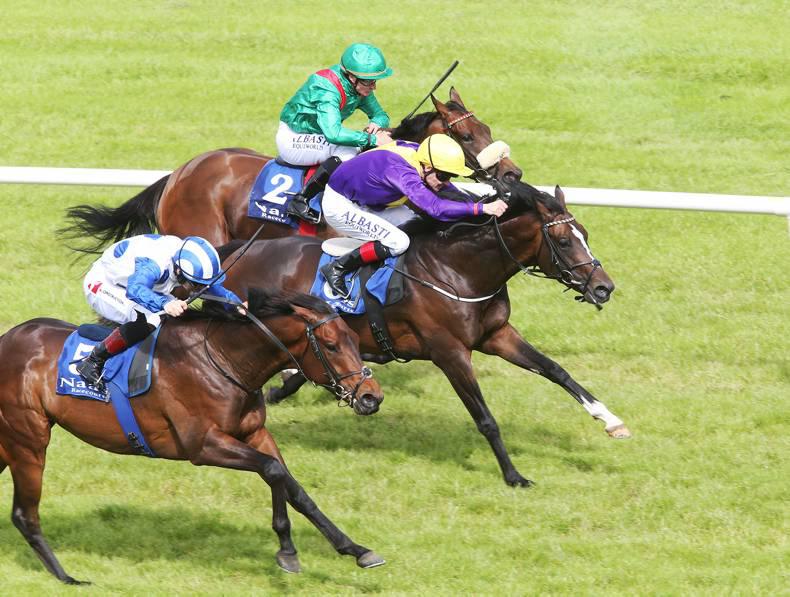 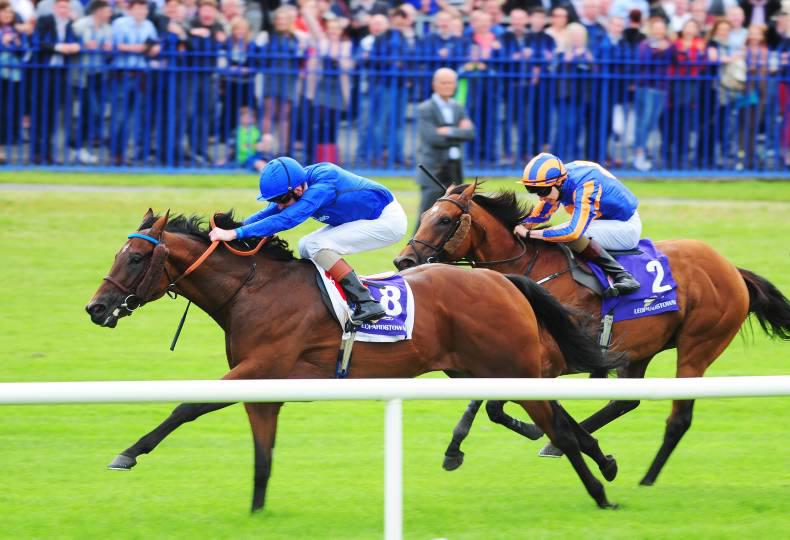