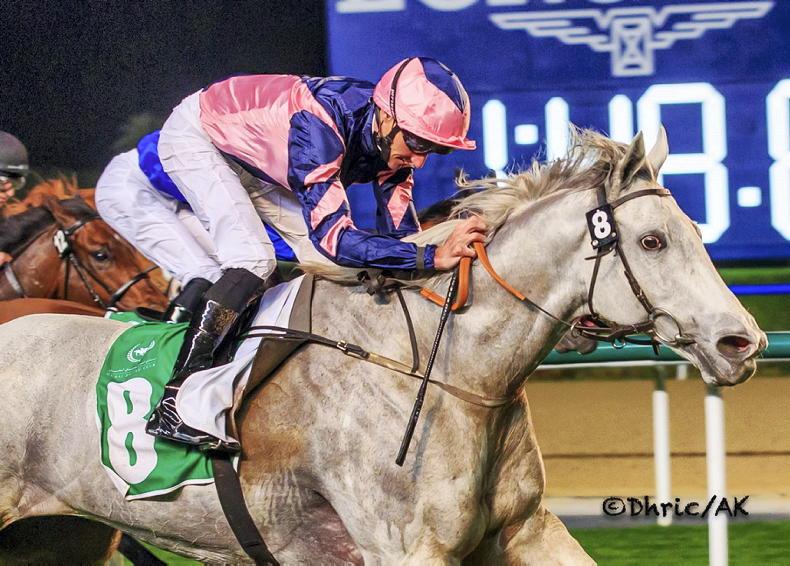 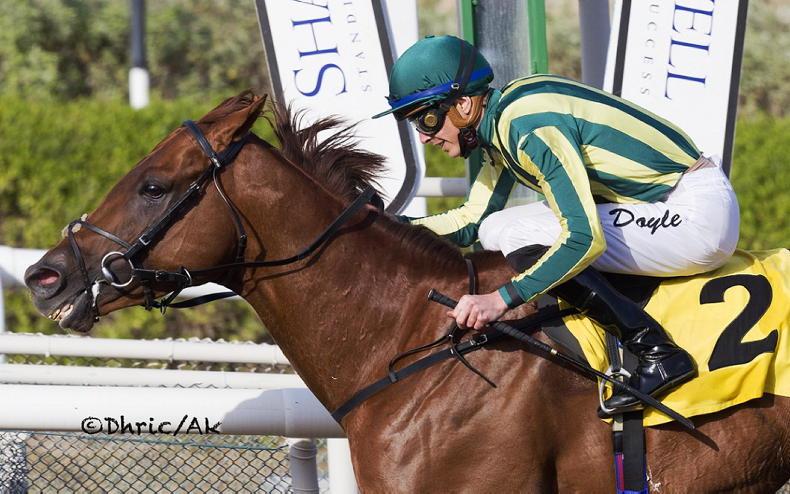 The Group 3 Jebel Ali winner Algiers, an Irish-bred, with Dane O'Neill in the saddle \ Dhric/AK 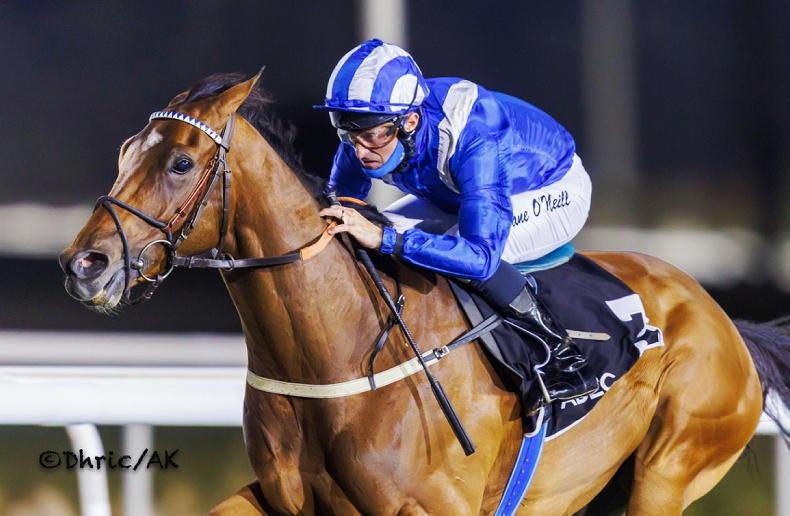 Haqeeqy winning the Listed HH The President Cup with Dane O'Neill in the saddle, a first success as a trainer for Irishman John Hyde \ Dhric/AK
Previous Next

LORD Glitters took centre-stage at the fifth meeting of the 2022 Dubai World Cup Carnival at Meydan last Friday evening. He won the nine-furlong Group 2 Singspiel Stakes on turf for a second consecutive year for David O’Meara in the colours of Geoff and Sandra Turnbull.

Danny Tudhope was never too far off the modest early pace on the nine-year-old Whipper gelding, who pulled wide early in the straight before making relentless progress over the final two furlongs. A dual Group 1 winner, including the Jebel Hatta over this course and distance on Super Saturday last March, the globetrotter was successful in the Group 3 Bahrain International Trophy in November.

Tudhope said: “He is a horse you have to ride for a bit of luck and they went a steady but consistent gallop, so I was always in a nice rhythm. We knew he had improved from his first run back and he is a real star who owes nobody anything. It is always special to win a big prize on him.”

Over a mile on dirt for three-year-olds, the Group 3 UAE 2000 Guineas was the perfect opportunity for Antonio Fresu to produce Azure Coast fast and late to win in the colours of Vladamir Kazakov for trainer Pavel Vashchenko and Russia.

Having his first start this year, the Street Sense colt is now unbeaten after three starts, having won a local Group 2 over a mile on his debut in Russia in September, before making a winning UAE bow in a seven-furlong conditions contest at Meydan in December. In both UAE outings he has been virtually last entering the home turn before powering home. He looks an exciting young horse.

Kazakov said: “Obviously we are very happy with that, and we were keen to race at Meydan which it is such a wonderful facility. To win a big race is just amazing.”

The quality card concluded on the dirt, over six furlongs, with the Group 3 Al Shindagha Sprint producing a progressive winner in the shape of Meraas. Fresu completed a double, this time for Musabbeh Al Mheiri in the colours of Maitha Salem Mohammed Belobaida Alsuwaidi. A five-year-old son of Oasis Dream gelding, Meraas was registering a fifth career success.

Over the same 10 furlongs on dirt as the Dubai World Cup, the Listed Curlin Stakes was won in gritty fashion by Appreciated, Fernando Jara in the saddle sporting the silks of R3 Racing for Doug O’Neill. The trainer enjoyed a Carnival double last week and this six-year-old gelded son of Acclamation was recording his sixth success, but his second on dirt.

Over seven furlongs on turf, the Listed Business Bay Challenge was contested by a capacity field of 16, but Storm Damage was soon in front under Pat Cosgrave and won stylishly for Saeed bin Suroor, leading home a Godolphin 1-2-3. A four-year-old homebred Night Of Thunder gelding, Cosgrave’s mount was winning for the fourth time on just his sixth racecourse appearance.

The mile and a half turf handicap also went to Godolphin who were responsible for six of the 15 runners, Charlie Appleby saddling Global Storm for a relatively smooth victory under William Buick.

Another by Night Of Thunder, the five-year-old gelding quickened to the front entering the final furlong, and stayed on strongly to record a fourth career success. Buick said: “It was a competitive, strong handicap, but my fellow had some good form in the book and we were very happy with him at home.”

The only purebred Arabian contest kicked off proceedings with AF Alajaj scoring easily in the Group 2 Mazrat Al Ruwayah, over a mile on the dirt track, champion jockey Tadhg O’Shea in the saddle for Khalid Khalifa Al Nabooda and trainer Ernst Oertel.

THE biggest race of the Jebel Ali season, last Saturday’s Group 3 Jebel Ali Mile, turned out to be a relatively straightforward assignment for James Doyle and Algiers, a first winner of the season for both trainer Simon Crisford and owners Rabbah Racing.

A five-year-old entire son of Shamardal, and a dual listed winner in France for Godolphin and André Fabre, Algiers was registering his fourth and biggest victory to date on his second start for current connections. Doyle, who had just one ride on the card, said: “He showed plenty of ability in France and he ran very well here the first time before tiring, so we thought the drop to a mile would suit.”

The main support contest, a six-furlong conditions race on dirt for three-year-old, provided Libyan Classic with the perfect opportunity to shed his maiden tag at the fourth attempt, responding gamely to Antonio Fresu in the red and white striped silks of Elbashir Salem Elhrari for Musabbeh Al Mheiri. The winner, a son of Classic Empire, clearly relished this new surface and the uphill finish.

The best of the handicaps was over a mile and owner Elhrari was celebrating a double after Melicertes landed the spoils under Pat Cosgrave for Bhupat Seemar, also completing a brace. Another who won twice in France for Fabre and Godolphin, the six-year-old gelded son of Poet’s Voice was opening his local account. Seemar said: “We think seven furlongs is probably his ideal trip but there are few options for him at that trip.”

Rayig benefited from a furious early gallop in the six-furlong handicap, produced late by Tadhg O’Shea to lead close home for RRR Racing and initiate Seemar’s double. The six-year-old son of Exceed And Excel was recording a third career victory.

The opening seven-furlong handicap was a red letter occasion for Rashed Ali Al Rayhi who saddled his first ever winner, as well as being a first success for owner Shoaib Ahmed Sarfaraz, courtesy of Chosen Mark who won cosily under Omani apprentice Saif Al Balushi.

The four-year-old The Last Lion gelding was doubling his career tally, adding to a maiden he won on his debut at Newcastle on the all-weather in July when trained by John Quinn.

The seven-furlong maiden developed into a duel in the final furlong, Ebnzaidoon and Pat Dobbs just coming out on top for Doug Watson in the colours of Ali A Aneizi. Making his UAE debut, the four-year-old Speightstown gelding was placed a few times for Shadwell when trained by John and Thady Gosden.

Dobbs and Watson completed a double with the hard fought victory of Rougher in the concluding near 10-furlong handicap for EERC.

Monday’s prestigious HH The President Cup fixture in Abu Dhabi was officially highlighted by the 11-furlong purebred Arabian Group 1 version of the coveted prize, and was won by a resurgent Somoud who defended his crown in gritty fashion.

Confidently ridden by Adrie de Vries, Jean de Roualle’s stable star hit the front halfway up the short straight, and the eight-year-old homebred entire stayed on gamely to repeat his victory of 12 months ago for Yas Racing. After winning this race last year he then successfully defended his crown in the Emirates Championship, and that is his most likely next assignment.

The thoroughbred counterpart, the seven-furlong Listed HH The President Cup, provided Irishman John Hyde with the perfect opportunity to open his account as a trainer at just the fifth attempt, saddling local debutant Haqeeqy to record a facile success under Dane O’Neill for Shadwell.

Bred in Ireland by John O’Connor, the five-year-old Haqeeqy, a gelded son of Lope De Vega, won four times in Britain, including the Lincoln Handicap, when trained by John and Thady Gosden for Hissa Hamdan Al Maktoum. A €28,000 Tattersalls Ireland yearling, he resold at the Goresbridge Breeze Up Sale for €175,000.

The winner was always travelling well under O’Neill before unleashing a withering challenge down the centre of the track, grabbing the initiative with just under a furlong remaining, and had the race in safekeeping.

O’Neill said: “It’s a great result and story for everyone involved. We were pretty hopeful, but in these big fields around here you need a bit of luck. At halfway I knew I was going to be hard to beat, and he did it very well in the end.”