Leo Powell reports on trade at the Tattersalls Cheltenham April Sale, lead by the Quakerstown winner Search For Glory 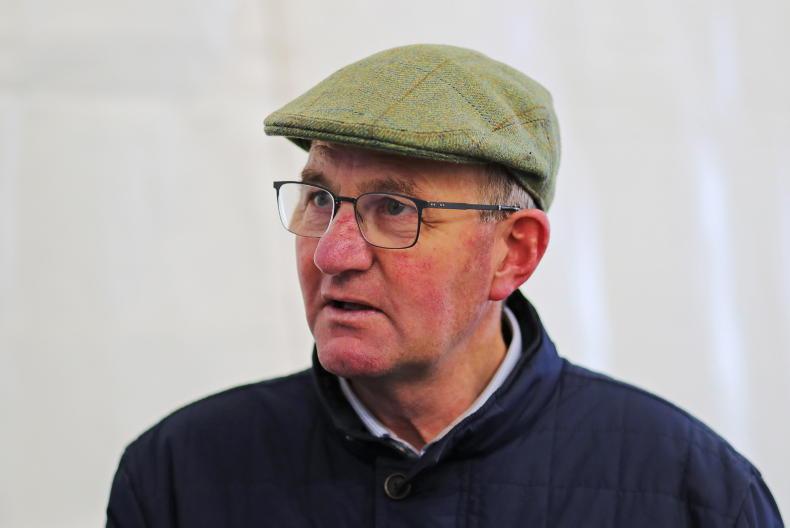 John Costello sold the sale-topper, Search For Glory, to Gordon Elliott for £200,000

IRISH vendors and purchasers were to the fore at yesterday’s Tattersalls Cheltenham April Sale, when a larger catalogue than last year was responsible for a sizeable increase in turnover, a record. Average and median figures were very much in line with last year, and it was noticeable that many of the lots sold were bought by British trainers.

Not for the first, or last, time, the top lot will be headed to Gordon Elliott’s Cullentra Stables. Winner on his debut at Quakerstown on Sunday by five lengths from 10 opponents, and a wildcard entry for the sale, John Costello’s five-year-old Search For Glory sold to the Co Meath trainer for £200,000. The son of Fame And Glory is a half-brother to the smart Global Equity, and their dam is a half-sister to Tumbling Dice. This is the immediate family of Remittance Man.

Harold Kirk and Willie Mullins combined to secure two of the day’s top four offerings, Shanbally Kid and I Will Be Baie. The former is another five-year-old, this time a son of Presenting, and the Richard O’Brien-trained grandson of Grangeclare Lark won a bumper at Clonmel this month on his second start for owner-breeder John Hayes.

Kirk said of his £190,000 purchase: “He was very impressive when he won his bumper. Willie [Mullins] had the second [Polo Lounge] and we think he is a nice horse.”

The Kirk-Mullins team also bought the French-bred I Will Be Baie for £150,000. The four-year-old is a son of Crillon and grandson of the Grade 3 hurdle winner Psychee Du Berlais, herself an own-sister to Marcus Du Berlais, winner of the Grade 1 Leopardstown Chase and who finished second and third in the Irish Grand National.

“It is one of the best French pedigrees in the book and he is by one of the best stallions in France,” said Kirk. “Poliglote is a fantastic broodmare sire. He looks a quality horse, he is quick, and he is a speedy horse with lots of class.”

Trained by Colin Bowe who bought him at the Tattersalls Ireland July Sale last year from Boardsmill Stud, I Will Be Baie won on his debut at Taylorstown.

Many of the top lots came from the wildcard entries, and another among this cohort was Man At Work who cost Tom Malone, on behalf of David Pipe, £155,000. The four-year-old son of Workforce was a faller at the last in one of the best four-year-old point-to-points held in Ireland this season. “He has very good form, and he is a lovely individual. He is only four and will progress with a summer’s grass. He looks an old-fashioned steeplechaser, and the form of the race is rock solid so hopefully he can go on like the others,” said Pipe.

Man At Work was trained by Benny Walsh who was not at Cheltenham, his wife Jenny representing the Co Wexford team. She said: “He is owned in partnership with Denis and Conor Hayes, who are from Waterford,” Of the horse falling in his point-to-point, she said: “It was not the plan, but it was obvious he was going to be second. He was behind Benny The Butcher, who is highly regarded, and the second-placed Croke Park and the third Ballybeg Boss both have gone on to win.” The gelding was bought last year for €18,000.

Colin Bowe sold two of the nine lots to realise six-figure sums. They included the only filly in that group, a four-year-old daughter of Walk In The Park out of a winning half-sister to the Group 1 Irish St Leger and Grade 1 Punchestown Champion Hurdle winner Wicklow Brave. Goodtimecrew, who cost €29,000 last year, sold for £135,000 to Kevin Ross Bloodstock. She has run once and was runner-up at Ballyknock to Love At Sea, who earlier in the session sold for £70,000,

“She has been bought for Harry Fry, we thought she is a lovely filly. She is my pick of the sale,” said Ross. “Unfortunately she had a little cut that she picked up here, but it is nothing. She is a lovely quality filly with a good pedigree and the sire speaks for himself. Barry [O’Neill] was disappointed that he was beaten on her; on another day he felt he would have won. She has a lovely outlook, a lovely head on her, lovely ears. Colin was very keen on her and so was Barry.”

Arguably, Timmy Tuesday should have been a winner of his debut in a Ballyarthur point-to-point, instead of which he is listed as having run out, following a slight issue at a doll two from home. That setback did not put off trainer Andrew Latta going to Cheltenham to offer the four-year-old son of Mahler, and it was a good decision as the gelding fetched £125,000. It is a fine return on the €10,000 that Latta and part-owner Timmy Hillman spent to buy him as a foal.

“He is a good hardy horse and we decided to train him and it has worked out,” said the Co Wexford-based Latta. “He was unlucky in the race, they just went the wrong side of a marker. We thought about waiting to get a win, but the ground has gone against us. We are very happy with the outcome and he is going to a good home.” The gelding was bought by Mouse O’Ryan and Gordon Elliott.