Does Royale Pagaille’s hugely impressive success under top-weight put him ahead of the staying chasers? 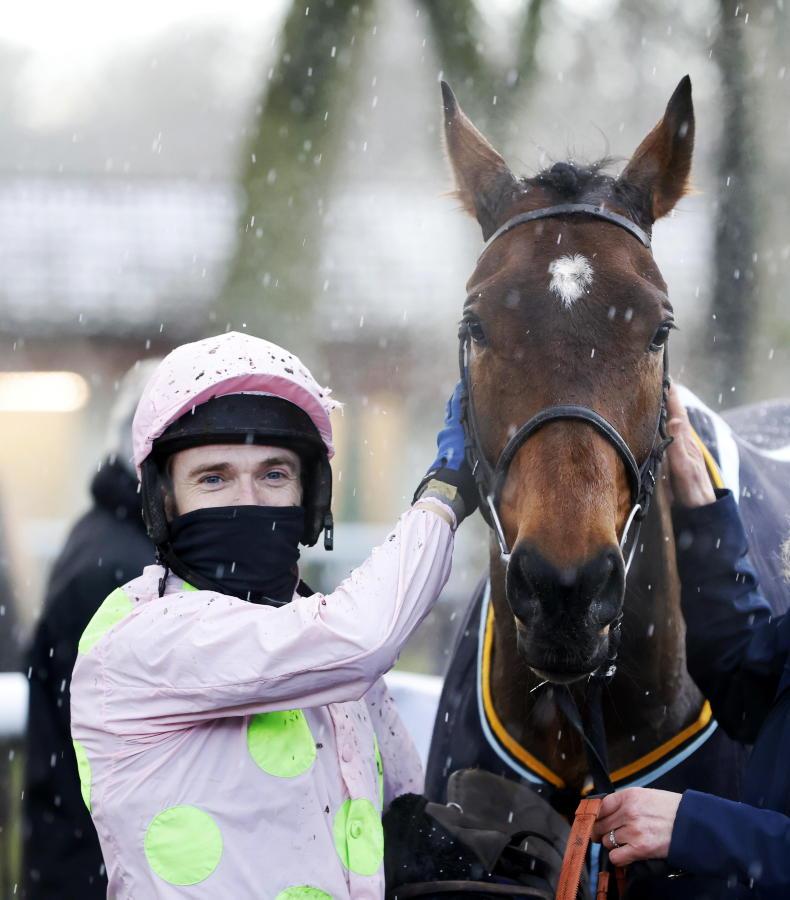 Royale Pagaille and Tom Scudamore after winning the Peter Marsh Chase - he would very difficult to beat in novice company at the Festival \ Healy Racing.

IT might be imagined that First Flow’s win represented the best performance of the period under review, but it is at least arguable that Royale Pagaille’s hugely impressive success under top-weight in the Peter Marsh Chase at Haydock surpassed it.

Royale Pagaille cruised clear to win by 16 lengths and seven from a couple of fairly useful types and seemed to run a fast time in the process.

That last remark is in the context of there being no race at the same distance with which to compare it, and is mindful that the ground was no worse than “soft” on the chase track judged on times.

I had Royale Pagaille on 153 at Kempton and 141 the time before that. This effort looks to be worth a figure of 168, and Royale Pagaille should be very difficult to beat in the Festival Novices’ Chase (formerly the RSA) if going for that. Monkfish is on 158).

However, connections are considering a tilt at the Cheltenham Gold Cup itself, in which a figure in the 170s may well be needed. Royale Pagaille would be a legitimate contender for chasing’s blue riband, however: of that there should be little doubt.

A positive view of Royale Pagaille’s winning time does require quite a positive view of Silver Hallmark’s earlier on the Haydock card. It occurred in a Grade 2 novices’ chase, but one in which the odds-on Allart fell and left only three to complete.

Nonetheless, this looks worth a figure of 147 for Silver Hallmark, who had run Fiddlerontheroof (also rated 147) to a head at Exeter on his only previous outing over fences.

Time analysis also suggests Faivoir achieved a fair bit in running down the talented but quirky Minella Drama late on in the Grade 2 novices’ hurdle on the same Haydock card.

Faivoir’s time was slightly quicker than that recorded by Navajo Pass in winning the Champion Hurdle Trial later on (there is a possibility that the ground deteriorated a bit in between), and I have Faivoir on 142 now.

Navajo Pass got the run of things up front in a three-runner affair, and was quicker later on than Faivoir while carrying 3lb more. He remains on 151, while Buveur d’Air should build on the 145 he managed here, but will have to, and some, even to get near to his previous best of 171.

Yala Enki’s victory over If The Cap Fits (149) in the Weatherbys Portman Cup Chase was the highlight of Taunton’s card, the former doing well to overcome a blunder and left on 161 despite running to “only” 153 here.

There was also a notably good and clear-cut handicap hurdle win from Brewin’Upastorm (157), which suggests he can make his mark in a race like the Aintree Hurdle in due course.

Newbury’s meeting last Wednesday unearthed a couple of promising winners in Dostal Phil (142), who landed a novices’ handicap chase easily on what was his debut over larger obstacles, and the expensive buy Gallyhill (130) in the novices’ hurdle. The former is talented but had proved rather hit and miss previously.

I had Allaho 4.5s (about 20 lengths) quicker in winning the Horse & Jockey Hotel Chase than Colreevy had been in landing the mares’ novice chase (also a Grade 2) half an hour earlier, though the latter did carry 4lb more.

That reflects quite well on Allaho, who was significantly faster than Colreevy mid-contest then found more when challenged in his own race by Elimay, who he held by three lengths.

Allaho is now back on 161 – about 3lb shy of a typical Ryanair Chase winner – while Colreevy goes to 154 on account of how easily she won, and Elimay is now on 156.