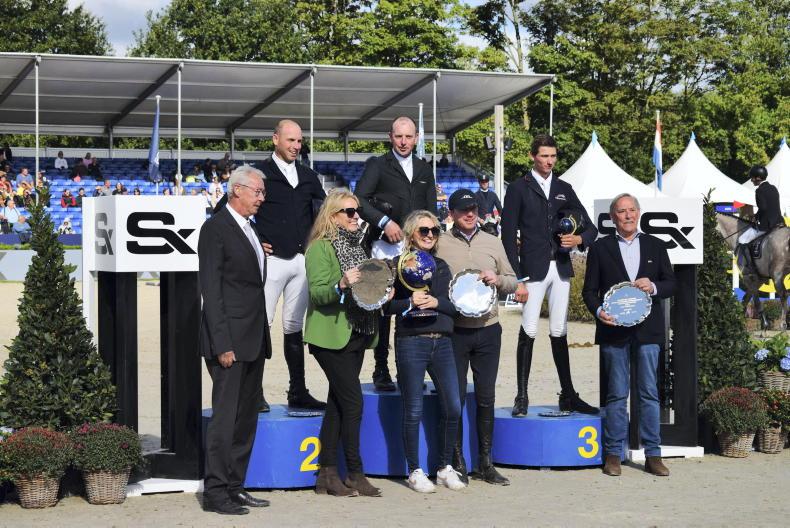 Kilkenny’s Ger O’Neill stands on top of the podium at Lanaken after being crowned World Champion with the Irish Sport Horse BP Goodfellas. Also pictured (centre) Cheryl and Greg Broderick, who bred BP Goodfellas along with Kevin Babington\ Image courtesy of HSI

AN incredible run of results during the 2022 season for Irish horses, riders, breeders and owners continued today, (Sunday) with two outstanding victories for Ireland at the FEI WBFSH Jumping World Breeding Championship for Young Horses at Lanaken in Belgium.

Having come through two intense qualifying rounds earlier this week that attracted over 240 starters, the top 47 combinations took their place in the final to see who would be crowned World Champions. Eighteen horses and riders jumped clear in the first round to make it into the jump-off, with two of those for Ireland. Third-last to go against the clock, Ger O’Neill and BP Goodfellas (ISH) stormed into the lead with a stunning clear round in 40.12 seconds – a time that would prove unbeatable.

The six-year-old final saw Ireland claim another memorable win, as Ethen Ahearne and the Irish Sport Horse ABC Saving Grace, owned and bred by Carlow's Patrick Kehoe, took Ireland’s second World title of the day. A massive 270 combinations entered the six-year-old competition at the start of the week, with the top 40 making it through to the final. Fourteen combinations went forward to the jump-off, with Ahearne and ABC Saving Grace the sole Irish representatives, taking victory with a brilliant clear in 36.74.

Three-time World Championship winner Ger O’Neill said: “A fantastic day, I was a winner here in 2016 with a six-year-old and back again in 2017. It’s very nice to come back and win it again. It’s a great feeling at a World Championship, it’s unbelievable to win it. Huge thanks to Greg and Cheryl Broderick and to Kevin Babington who own and bred the horse, and everyone out here giving me a hand, it’s really a team effort from Ireland here which is huge, and to win on an Irish horse is also fantastic.”

“It’s really great to get results like this in a World Final, Ger did a fantastic job as always in the five-year-old final and for Ethen to follow-up with another Irish win in the six-year-old final made it a day to remember."

“It was fantastic to see Irish Sport Horses do the double and also take victory in the six-year-old final to cap a fantastic week of jumping. Ethen did a beautiful job of balancing speed and accuracy. Pat Kehoe has done a wonderful job of breeding and retaining ABC Saving Grace (ISH) who has come up though Horse Sport Ireland’s national breeding initiatives and the HSI Studbook Series. These programmes, and the teams participation at Lanaken, are supported by the Department of Agriculture, Food and Marine. We are extremely grateful for this support for our Irish horses, breeders, and producers. A day like this demonstrates the value of these programmes in producing the best in the world. Congratulations again to all of our riders, owners and producers for a wonderful week of jumping in Lanaken.”

Horse Sport Ireland CEO Denis Duggan commented: “Congratulations to all our riders on their phenomenal results here in Lanaken. To Ger O’Neill on such a magnificent round and performances over the course of the competition with BP Goodfellas (ISH), bred by Kevin Babington and Greg Broderick’s Ballypatrick Stables in the five-year-old final and to Ciaran Moran who placed eighth.

“We had another outstanding performance from Ethen Ahearne and the Irish Sport Horse ABC Saving Grace, owned and bred by Patrick Kehoe, to take Ireland’s second World Championship medal win of the day in the six-year-old final. Great credit is due to the Irish riders, breeders and owners who are out in force at Lanaken this year. The Studbook Series at home is the preparation series for Lanaken, and success here proves how important the Studbook Series Classes are for our breeders.

“Reaching the World Breeding Championships, and especially winning here, provides our breeders and owners with a wonderful “shop window” to the world of buyers who gather here. Ultimately, we do want to be able to keep the best of our horses, however that’s not always possible and our industry at home is dependent on overseas sales to ensure a vibrant market and industry. The FEI WBFSH Jumping World Breeding Championship for Young Horses in Lanaken provides the opportunity to showcase the best of our breeding and for breeders to make those all important sales too.” 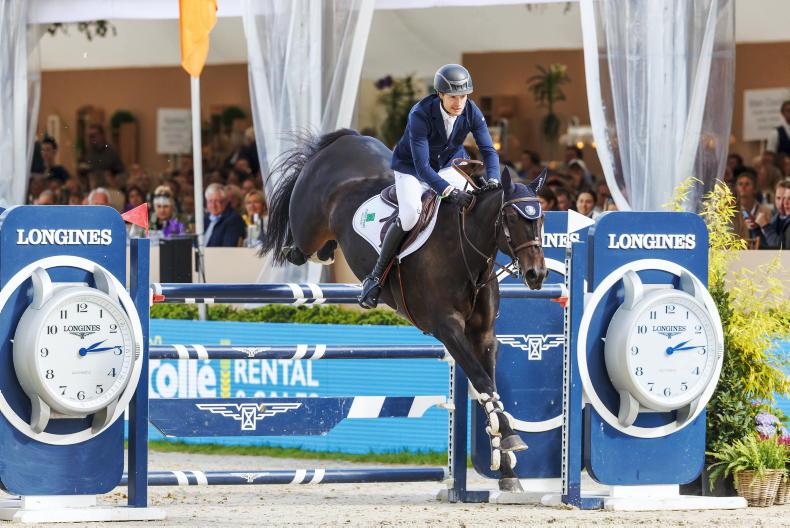 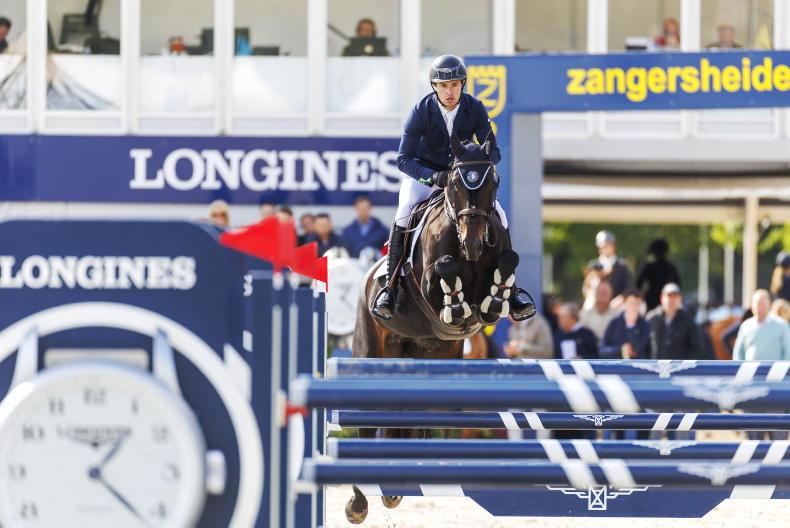 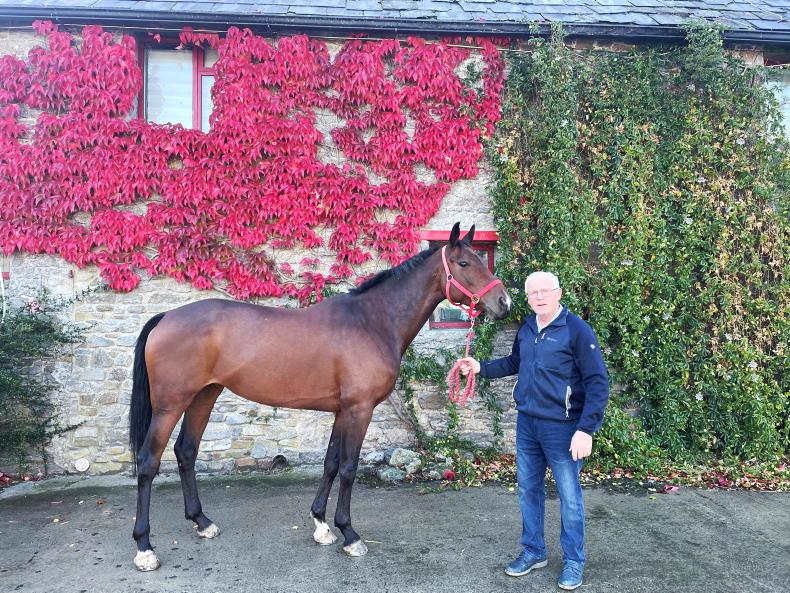 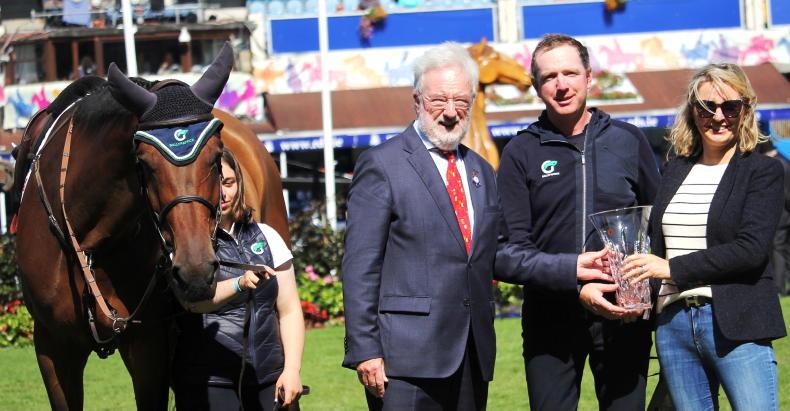