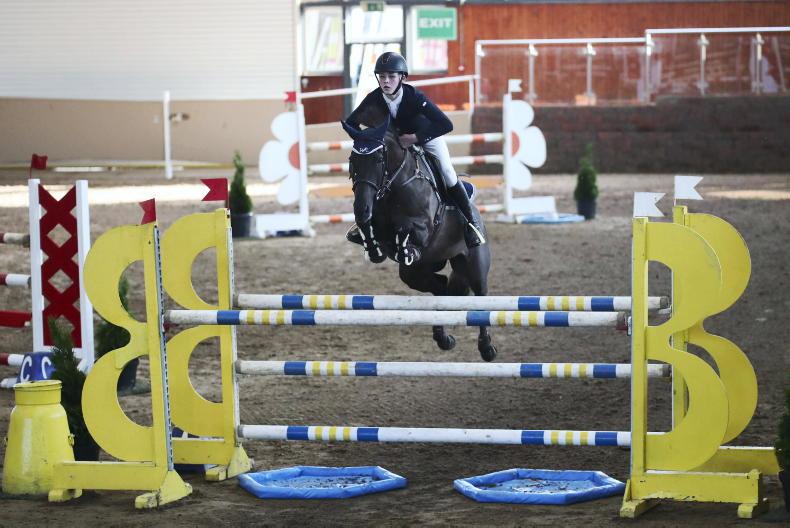 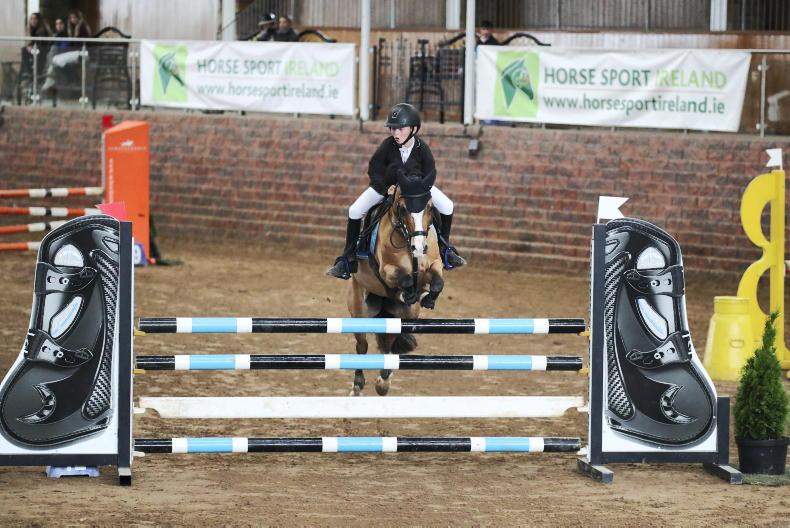 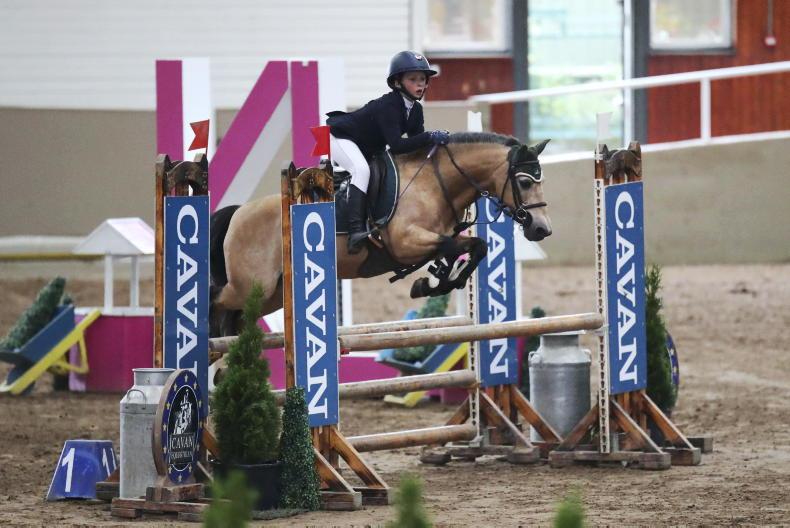 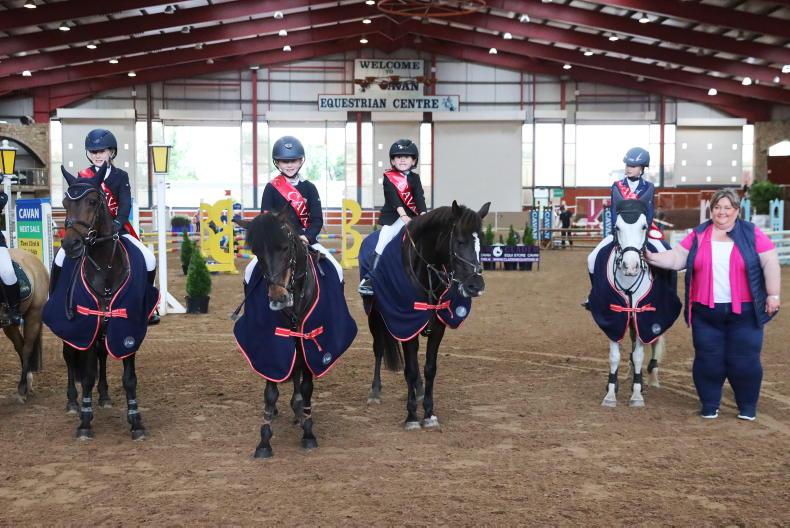 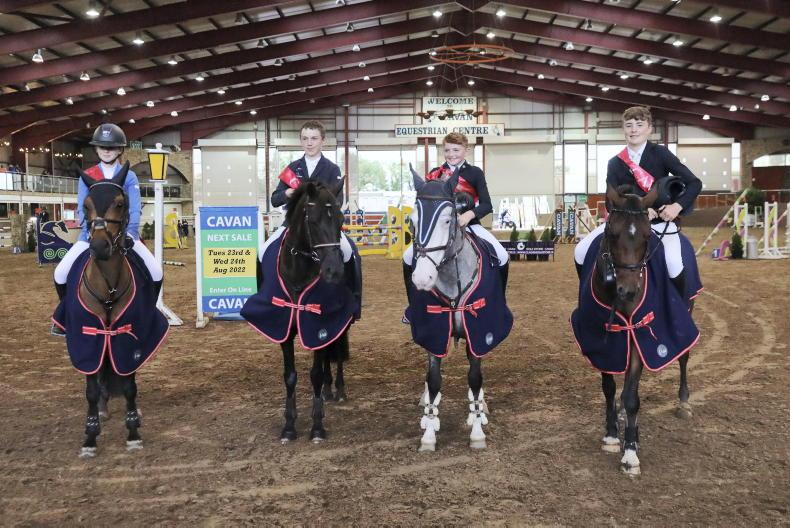 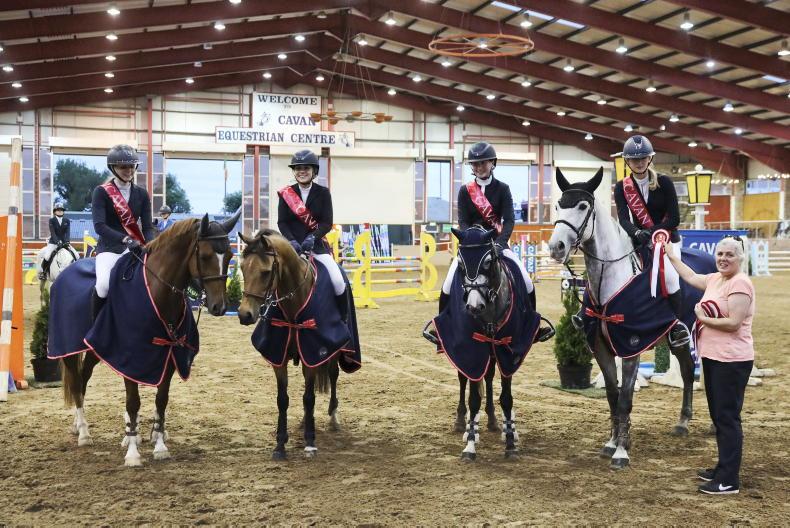 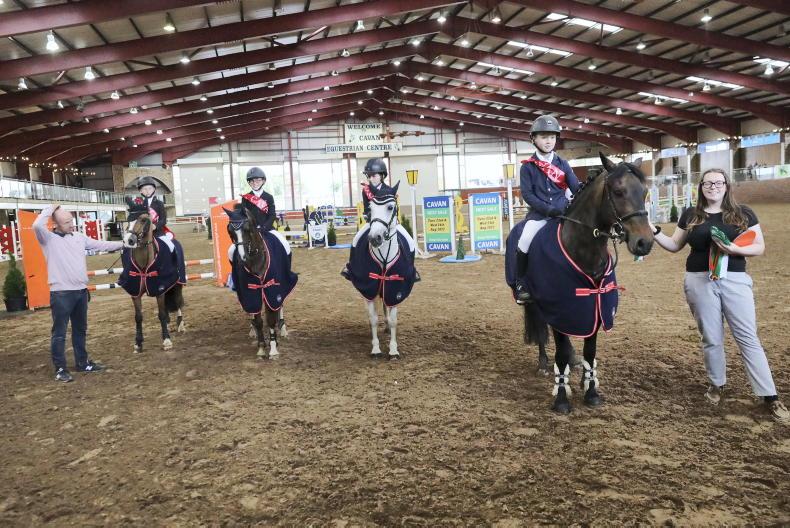 IT was a busy week for the Clarke family at Cavan Equestrian, as pony riders flocked to the popular venue to contest the July Home Pony International Show. Kicking off last Thursday, entries were well supported across all classes.

The final Grands Prix took centre stage on Sunday. First up was the 128cm-85cm Under 10 Grand Prix, with 57 battling it out. Claiming victory here was Connaught rider Ella Clash and King Of Rock and Roll, delivering a double clear in a time of 33.21 seconds. Poppy Dorise played it safe when she came home clear with Manordeilo Cardinal’s Dream in 35.94 for second. Munster rider Katelyn Horgan and Coppenagh Hakuna Matata also put in a foot-perfect performance in 37.24 for third place, ahead of Leinster’s DJ Kent who came home clear in 38.72 aboard Paris.

Last of the double clears and slotting into fifth place were Amber Tobin and Glansevin Fairfax, in 39.09. Chloe Clarke put in a very fast round with Pepsi Mac in 35.62, but four faults meant that she had to be content with sixth place. Winner of the Belmont House Hotel-sponsored 128cm-1.05m Grand Prix was Charlie Flynn and Penchwintan Glynle, posting a double clear in 36 seconds. Robbie Sheehan and Hes A Touch of Magic put in a gallant attempt, but despite their best efforts, a clear in 36.34 saw them take the runner-up spot on this occasion.

Munster rider Harry O’Callaghan and Kilcreene Snapdragon were last of the double clears in 41.16 for third place. Ulster’s Elizabeth McCracken put in a very fast round of 33.70 aboard Uquam d’Emery PFS, but with two on the ground, they had to settle for fourth. The Myshowadvisor-sponsored 138cm-1.15m Grand Prix saw 30 combinations go to post and from those, four double clears were delivered. Taking the win was James Brown and Ruby Brown when they galloped home in 35.37.

Taking the more cautious approach paid off for Lauren Adams as she took the runner-up place with D Drim’ De Brixia (PFS), clocking 39.66. Conrad Sweeney also played it safe with Sakama Chezni and delivered a clear in 41.37 for third place. Ruben Foley accounted for the next two placings. He delivered his best result with Sparkling Boomastasia, clear in 46.60 for fourth place. He had an unfortunate four faults with Mayfly Green Peter in a very fast time of 35.81 for fifth. Claudia Carroll also had one on the ground with Tynagh Sunshine in 40.95 for sixth place. The 148cm Ballywalter Farms-sponsored 1.25m Grand Prix attracted the largest entry with 60 combinations going to post. Leading the victory lap was Ulster’s Ben Walsh and Derryvan Belle when they came home clear in 36.98. From the original starters, 14 booked their place in the jump-off and of these, five delivered double clears. Wexford’s Lauren Adams and Lexius “E” Van Het Juxschot were back in the line-up, claiming the runner-up place, clear in 39.32. Fellow Leinster rider, Anna White and Red Star Optimus slotted into third place when they came home in 40.32. Katie Nallon and Caliber DE opted for the longer lines and it paid dividends as they came home with a clean sheet in 41.18 for eventual fourth.

Last of the double clears was Leinster’s Kiera McGrath and Lough Key Camouflage, in 48.89 for fifth place. Katie McEntee proved that the time could be beaten when she clocked 36.82 with Carrickaduff Pet, but four faults meant a sixth-place finish for the Ulster rider.

Winner of the final 148cm 1.15m class, sponsored by Absolute Jewellery, was Kian Dore who partnered JJ’S Vino to a clear in 25.69, ahead of Lauren Adams and Quintaira D Z, clear in 26.54. Third place belonged to Rianna Mulligan and Highlandy Rebel, also clear in 26.95. Winner of the 148cm-1.05 championship was Tommy Moloney, fastest of the 26 double clears in 26.89. In the Linacre House Stud 148cm 95 class, there were joint winners with Joe Cadam (Oona Phantom) and Chole Hourigan (Kilmacow Chaffie) answering all the questions in 27.31. In the team classes, the Ulster team of Beth Thompson, Cara McFadden, Junny Dunlop and Alexandra Kiernan emerged as the 148cm team winners.