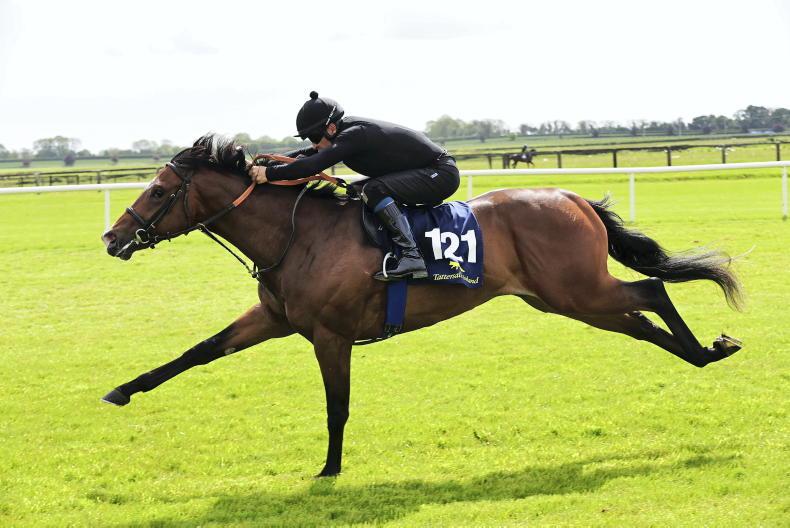 The Co Westmeath vendor grossed just short of €700,000 for its 16-strong consignment.

The agent, whose purchase is a half-brother to the very smart French filly Dibajj, reported that he was acting on behalf trainer Andrew Balding and owner Michael Blencowe who will be represented by Imperial Fighter in today’s Irish 2000 Guineas.

Another destined to begin her career across the Irish Sea is a daughter of U S Navy Flag who cost Jamie Lloyd €100,000. Lloyd was acting on behalf of Jonathan Sarkar and family whose purchase will go into training with Henry Spiller. The Tradewinds Stud offering, an 11,000gns yearling, is out of a winning Danehill Dancer mare.

One of the most notable breezes on Wednesday morning was supplied by a colt hailing from the second crop of the Group 1-winning Candy Ride horse Mastery who was offered from Eddie O’Leary’s Lynn Lodge Stud. A relation to smart performers on either side of the Atlantic, he was snapped up by Ross Doyle for €100,000.

The €100,000 mark was also reached by trainer Alice Haynes, acting for Amo Racing, when she secured a €100,000 Oasis Dream colt from Grove Stud. This filly is a half-sister to two winners out of Abbakova who was a very smart juvenile for Willie McCreery several seasons ago.