Already named Lucifer D'Ainay, a colt foal by the sire of Allaho set a new record price on the second day of the Goffs December NH Sale, reports Ryan McElligott 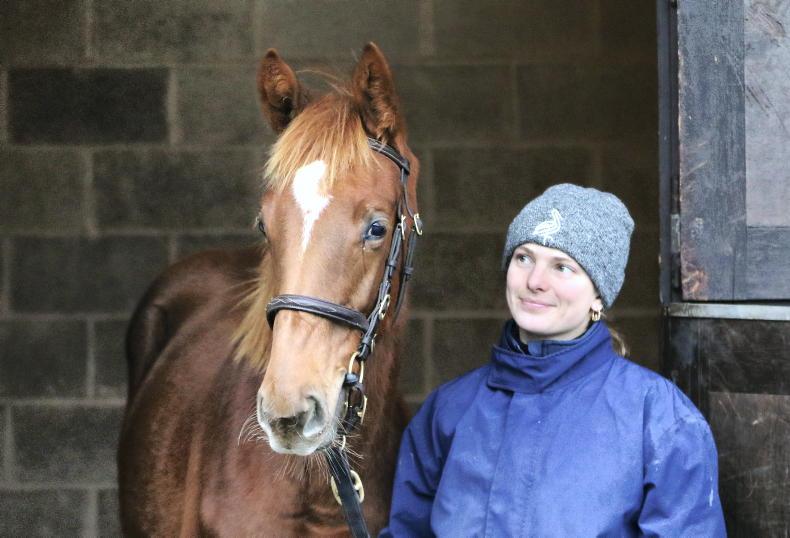 Maya Harries from Ballyreddin Stud with Lucifer D'Ainay, the colt foal by No Risk At All who sold for €100,000

A superb son of No Risk At All became the most expensive National Hunt foal to be sold at Goffs when fetching €100,000 to head the second session of the company’s December National Hunt Sale on Wednesday. The colt from John Dwan's Ballyreddin Stud in Bennettsbridge, Co Kilkenny, was bought by Ciaran 'Flash' Conroy’s Glenvale Stud in Carrick-on-Suir, Co Tipperary.

No Risk At All’s growing profile as an elite jumping sire was further emphasised with Allaho’s Grade 1 success at Punchestown on Sunday and that alone made this colt one of the standout offerings at this week’s sale. In addition though, the already named Lucifer D’Ainay is out of a half-sister to a French Grade 2 winner in Louping D’Ainay, the Cheltenham Festival second Sirene D’Ainay and the dam of the high-class Willie Mullins inmate Elixir d’Ainay.

All these factors combined made this colt one of the most coveted National Hunt foals to be offered at public auction this year and, after a lengthy battle Gerry Aherne, acting for Conroy, prevailed with a bid of €100,000.

“He’s been bought for Flash and he’s an exceptional individual whom Flash will bring back for sale as a three-year-old. We felt he was the best foal here and hopefully he’ll be lucky,” commented Aherne.

Conroy, who is currently in France, added: “I’d been to see him on John Dwan’s farm and I think he’s a very special foal. We’ll look forward to bringing him back for the Land Rover Sale in a few years' time”.

A portent of what was to come later in the evening was offered by the other No Risk At All colt on offer earlier in the day as top amateur rider Derek O’Connor had to go to €80,000 to secure the relation to Mr Mole, who was sold by Clonbonny Stud.

“He’s been bought for Coolmeen Farms – Paul and Ellmarie Holden. Ellmarie has a relation of this horse who she thinks quite a bit of and this colt is a very nice type from a top family,” stated O’Connor.

Adrian Costello added to his impressive collection of quality foals when going to €65,000 for a son of Crystal Ocean from Woodhouse Stud. This gelding is out of a Presenting mare whose dam is the brilliant multiple Grade 1 heroine Asian Maze.

“He’s a very smart foal from a very good pedigree and I love the fact that he is out of a Presenting mare, as I’d be a big fan of his as a broodmare sire. This colt will be back for sale as a three-year-old,” commented Costello.

Walk In The Park

For a period during the afternoon centre-stage was occupied by a €56,000 son of Walk In The Park from Ashmore Farm who was knocked down to Kieran Shields. This colt is out of the useful Square Sphere who has already produced a smart type in Deilginis.

Earlier Peter Vaughan, who has had the likes of Ginto, Energumene and Abacadabras through his hands in recent years, forked out €46,000 for a Getaway colt from Galbertstown Stables. This colt is a half-brother to the very useful Nina The Terrier who held every chance when falling at the last in a listed novice hurdle at Newbury last month.

“He’s a nice, good-looking foal. He cost plenty but you have to pay for the nice ones and I was pleased to get him,” stated Vaughan. “He’s from a nice, young family and the half-sister is very useful and will hopefully get the blacktype she deserved to get a Newbury a few weeks ago. He’ll be back here for the Land Rover Sale in a few years' time.”

Through the first half of the day the pace was set by a couple of €44,000 colts. The first of these was the latest notable representative from the first crop of Crystal Ocean and the half-brother to Minella Awards was bought by Garrynacurra Stud.

Also coming in at €44,000 was a son of Sholokhov belonging to Oliver Loughlin who was knocked down to Glenmore Farm. His dam is a half-sister to the Coral Cup winner Ninetieth Minute.

Although he had to settle for the role of underbidder on the €80,000 No Risk At All, leading pinhooker Dick Frisby did spend €42,000 on a well-related son of Blue Bresil and he secured a son of Walk In The Park for €37,000. 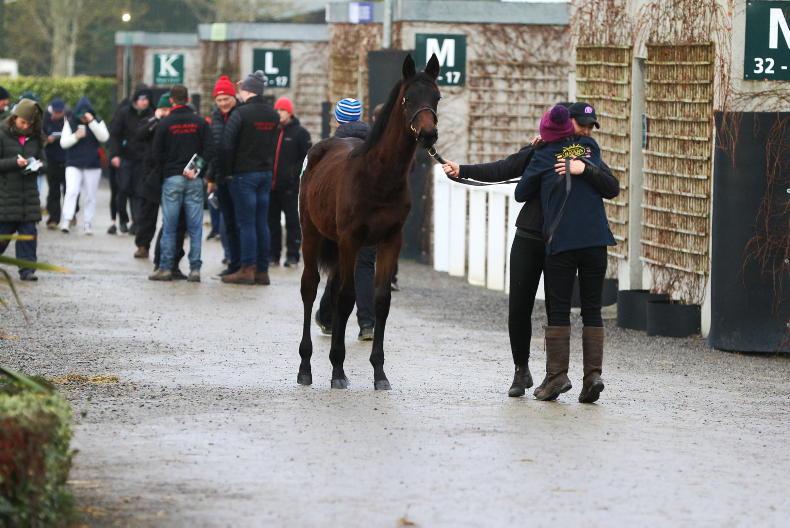 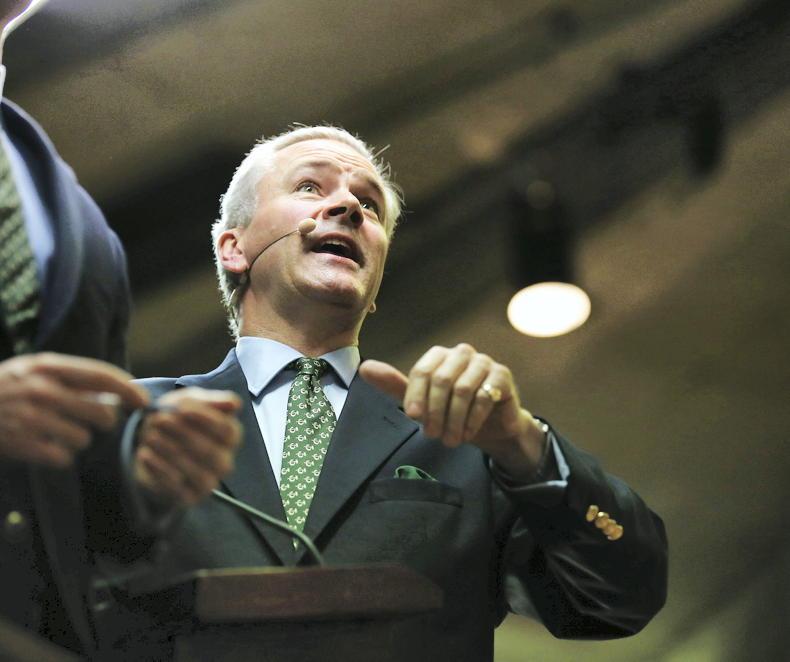 Irish Field Contributor
Henry Beeby: 'Our NH sales have made meteoric rise'
The Goffs CEO takes stock after a strong finish to the sales season in Kill 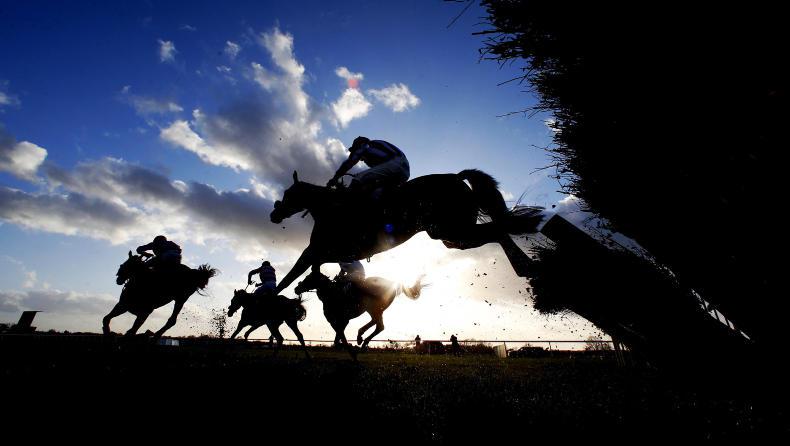 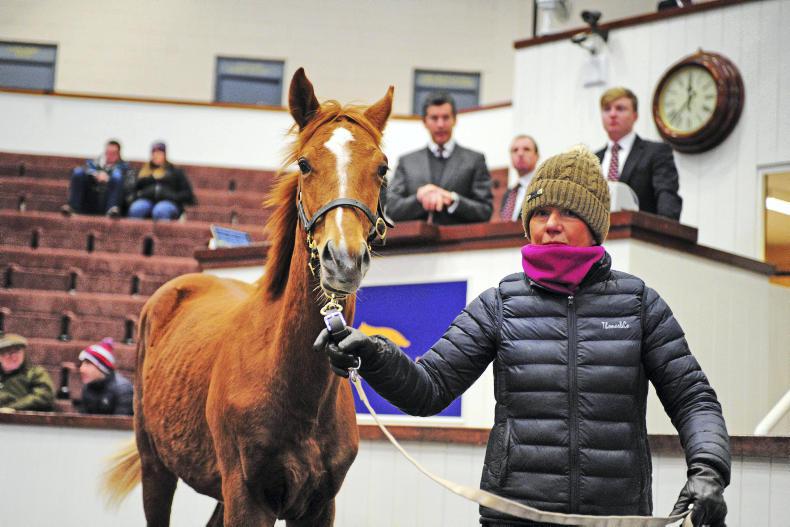 TATTERSALLS IRE FEBRUARY NH SALE: Risk rewards Rahinstown
Harry and Lorna Fowler’s Rahinstown Stud topped the sale with a son of No Risk At All whose talents have been advertised by Epatante and Allaho as the February Sale maintained it's recent figures