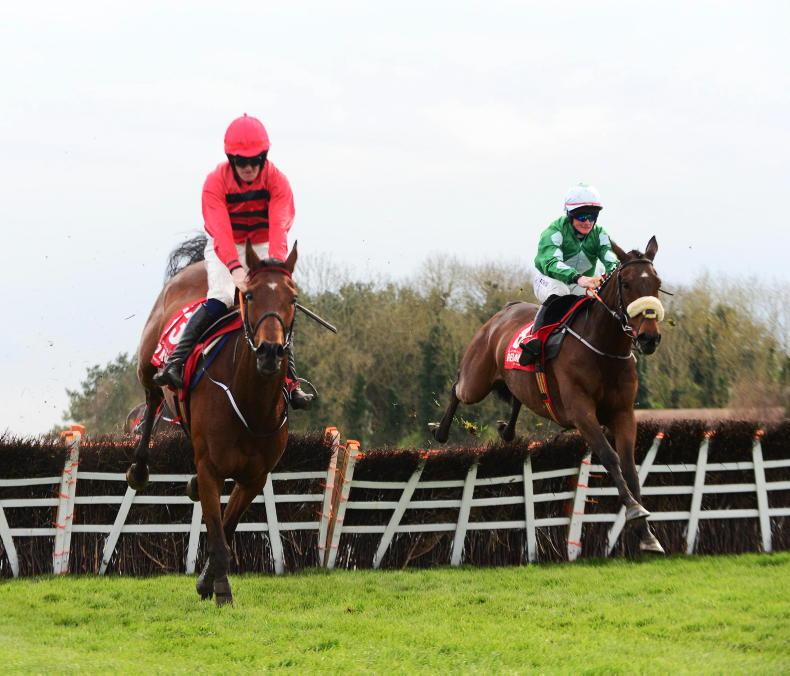 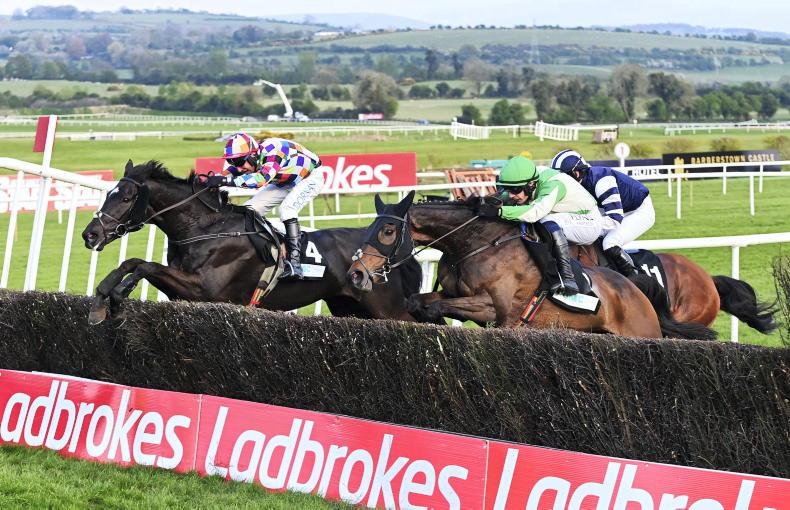 A 40/1 surprise was lying in wait in the €75,000 final of the Connolly’s Red Mills Irish EBF Auction Hurdle Series Final as the Peter Fahey-trained Ambitious Fellow and Sam Ewing shocked a host of better-fancied rivals.

A €30,000 store purchase, this six-year-old won a Fairyhouse bumper in October but had been off the track since finishing fourth in a Clonmel maiden hurdle the following month. That initial effort over timber apparently left him plenty to do but he relished every inch of this near two-and-a-half-mile trip to nail Rebel Ivy on the line after the latter looked to have stolen a march on the field rounding the last bend.

The victorious son of Fame And Glory is owned by the OGB Partnership whose members include the trainer’s wife, Ber, Ger O’Neill and Oran Crean. This was the rider’s biggest success since he turned his attentions to jumping earlier in the season.

“We’ve always thought he was a nice horse and he has the pedigree to suggest that nice ground suits him well so he’ll tip away for the summer,” said Fahey. “This has been a very lucky series for me and fair play to everyone involved in its creation as it gives horses falling within a certain price bracket to compete in their own grade.”

A resurgent Crosshill (15/2), in first-time cheekpieces, got Jessica Harrington off the mark for the meeting in the Louis Fitzgerald Hotel Hurdle which was falling to the trainer for the third time in the last six years.

The Ronnie Bartlett-owned gelding was relegated to third when Classic Getaway’s sweeping charge carried him to the front on the run to the last.

The latter couldn’t quite put the race beyond recall though and on the run in he had to contend with a rallying Crosshill and Fils D’Oudairies.

Crosshill responded well to Robbie Power’s promptings to force his way back to the front in the final yards for a neck success over Classic Getaway who was demoted to third as a result of coming in on top of Fils D’Oudairies who was just a further head back.

“He’s very tough and he stays very well. It just went wrong for him over fences earlier in the season and he lost his confidence,” remarked the trainer. “I don’t know if he will go back over fences but on good ground in the summer he might enjoy it more.”

NOT content with his Grade 1 domination Willie Mullins then secured a valuable handicap success as the Galway Plate winner Royal Rendezvous turned in a tremendous weight-carrying effort in the OMC Claims Handicap Chase.

The 10-year-old’s rating of 160 meant that he had to give weight all round here but he was restored to the peak of his powers while also benefitting from a superb ride from Paul Townend.

The latter charted a course down the inner before deftly switching his mount to the outside to make his bid in the straight. The Dr Peter Fitzgerald-owned 12/1 shot then got the better of Discordantly, who was in receipt of 18lbs, after the final fence to prevail by two lengths.

“Paul said he’s settling. He’s always very forward going but today when he got a bit of cover he settled into a rhythm and he was able to delay his challenge,” stated Mullins. “I don’t think we’ll go for the Galway Plate now, it would be a bit of an ask. The Kerry National is an option but that is over three miles. However, prize money wise that would look the race for him.”

Unbeaten in two bumpers in the autumn including a listed event at Navan in November, this mare looked a class act on her return. She had plenty to do turning in and then didn’t enjoy the smoothest of passages but she picked up really well for Pat Taaffe to take charge in the last furlong and defeat 200/1 shot Beyond Ambitious by half a length.

“I’d say the way the race was run suited her as she was very short. She got a stress fracture behind and had to stand in her box for about two months. I don’t know how she is fit but maybe she doesn’t take a lot to be ready. I’ve no doubt she could win flat races but I’d say she will go on a break,” declared Meade.

The promising Life In The Park (9/2) made a seamless transition from maiden hurdle company to land the Adare Manor Opportunity Series Final Handicap Hurdle. The Barry Maloney-owned gelding was a wide-margin winner at Tramore several weeks ago but a highly competitive edition of this near two-and-a-half-mile affair promised to be much tougher.

Life In The Park proved equal to the task though as he raced up with the pace and fought on splendidly for Mike O’Connor just when the British raider Thanksforthehelp threatened to take charge on the run to the last.

After getting to the front Life In The Park kept on well to hold off the staying on Rock Road by a length and three-parts. The winning trainer Henry de Bromhead headed the overall standings in this season long series while Jack Foley, who partnered the second, was the leading rider. After two false starts the race got underway eight minutes after the scheduled off time.

“He seems to appreciate nicer ground and it’s great for Mike too as he’s a big part of our team. We’ll leave this horse off now and bring him back to go chasing early in the autumn,” reported de Bromhead. 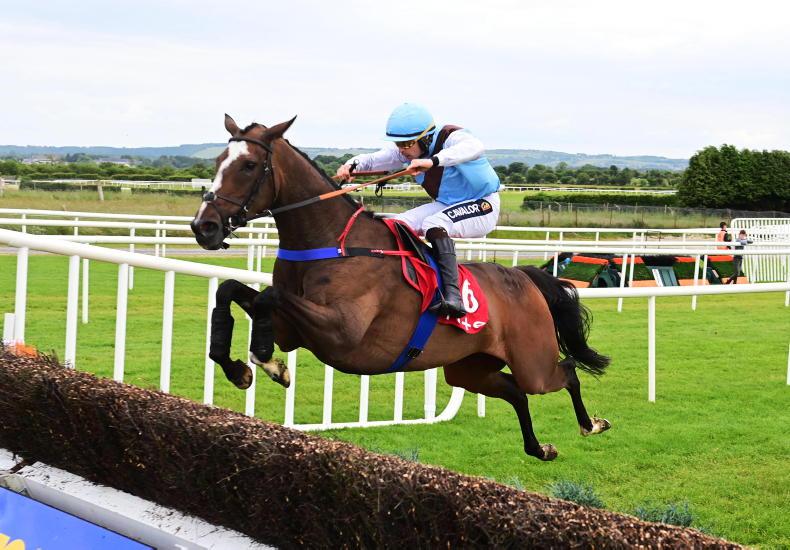 Gary Carson
ROSCOMMON MONDAY: Politesse leads rivals a merry dance
The Lorna Fowler-trained mare stepped up to three miles for the first time in the €24,000 Tote Connacht National and proved too strong for her eight rivals 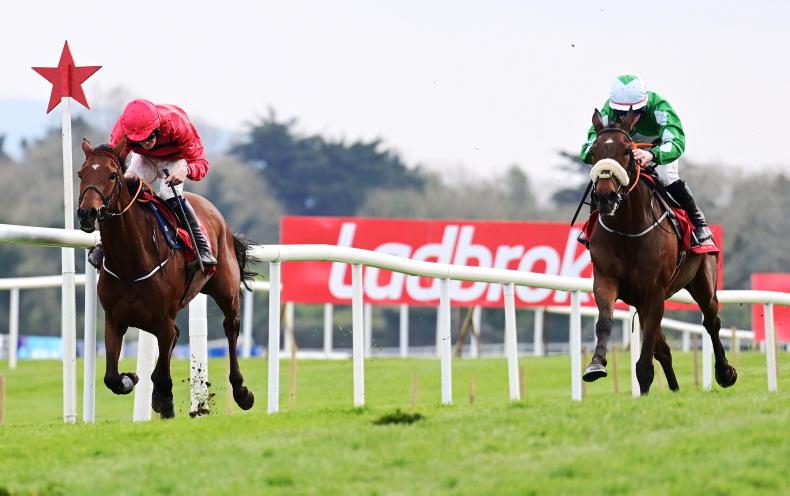 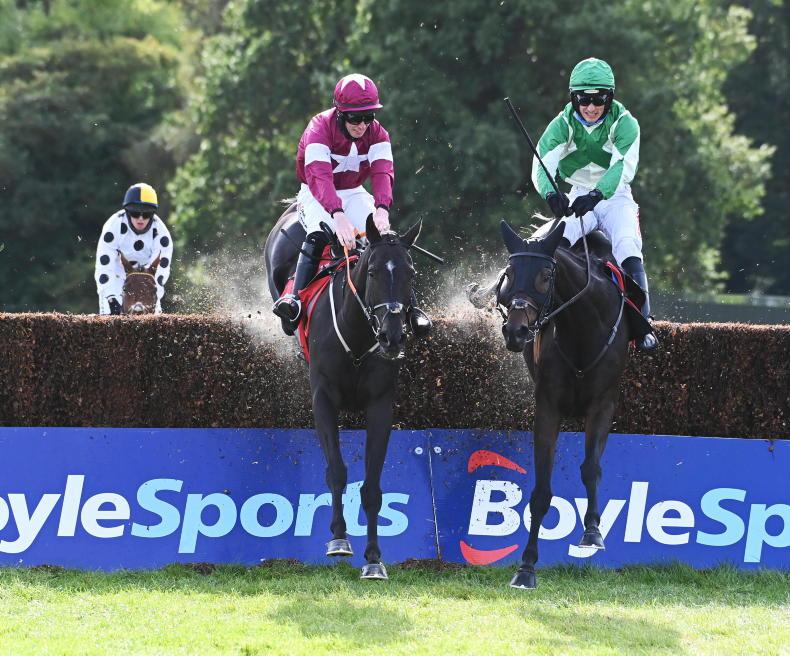