Title: NAVAN SATURDAY: A fourth win for The Friday Man

The Friday Man failed to fire for previous connections but has made it four wins from six starts this season for owner M.J. Hanrahan and trainer Gordon Elliott 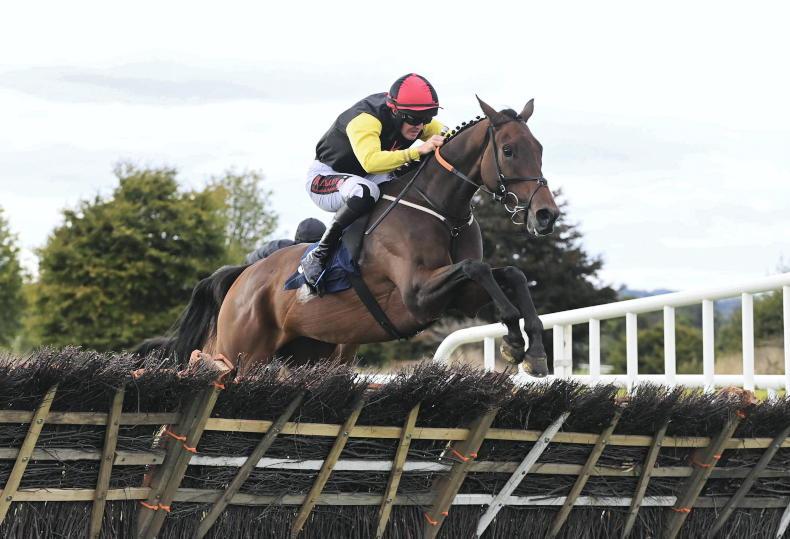 THE Friday Man won the fourth race of his career in the Bar One Racing Quick Deposit Hurdle to bring up a treble on the card for Gordon Elliott.

The 4/6 favourite’s assignment was made easier when main market rival Bugs Moran was ruled out due to a temperature, but he was nonetheless impressive over this extended two miles and five furlongs.

Kieran Buckley pushed him into the lead before the final flight and the five-year-old gelding stayed on well to score by nine lengths for owner Michael Hanrahan.

Elliott said: “He’s a grand horse and a money-spinner. He will go on any ground.

“I’m delighted for Kieren to ride a winner for us, that’s his first ride for me. I knew his mother and father very well when I was working in (Martin) Pipe’s. They would have looked after me very well. He’s a good rider.”

Buckley was also seen to winning effect aboard Lorna Fowler’s Y Fyn Duw A Fydd (11/2jf) in the Bar One Racing Handicap Hurdle.

This seven-year-old mare was always prominent and stuck to her task on the run-in as she hit the line a length and a quarter to the good for owner Robin Mathew.

Fowler said: “She gives it everything every time she runs. She deserved that more than anything.

“As Kieren said, she just loved it from start to finish and jumped beautifully. She had plenty left to give and all the cards fell so she will have a little holiday now.

“I would have thought a fence is surely in her future.”

GORDON Elliott and Davy Russell combined to land the two divisions of the Bar One Racing Bet In-Play Maiden Hurdle. First up was 2/1 favourite Pats Choice who made all and soon enjoyed a healthy lead before outgunning his rivals by four and three-quarter lengths for the Sloan family.

“He put his head in front. Look they are bang on the inside, so we said we would make plenty of use of him and let him stride along. I’d say it paid dividends - come and catch me if you can,” Elliott said.

The second split went the way of Nonbinding (7/2) who improved to lead at the second-last flight and powered up the hill to come in by seven and a half lengths for Alymer Stud.

Elliott said: “We fancied him in Downpatrick but he got wiped out at the first (hurdle). Davy was happy with him there today. He probably wants further and he is a big chaser. It is nice to get his head in front.

“He stayed going well and jumped well. We’ll try and find a winners of one somewhere.”

Nibiru finished second in last year’s renewal of the Navan Racecourse Ladies Handicap Hurdle and went a place better in the hands of Maxine O’Sullivan.

The seven-year-old gelding travelled into the race off the home turn and was produced to lead at the last.

The 5/2 favourite didn’t relent on the run-in as he posted victory by three and a half lengths for owner John Breslin, who was in attendance.

Trainer Tony Martin said: “He’s had a lot of chances and when he goes, he’s not too bad. He has earned another few runs after that anyway!

“She was very good on him, the old horse was doing nothing for her turning in then all of a sudden she pulled him out, and he took off for her.”

Royal Romeo (15/8) gave favourite backers another return when getting up to take the Bar One Racing Bet On Mobile Maiden Hurdle.

Bryan Cooper was in the plate on the five-year-old gelding who closed at the last and stayed on best on the inner to collar second-favourite Riaan close home. He took the prize by three-quarters of a length for owner Maria Laverty.

Noel Meade, who received a presentation after recently retiring as chairman of Navan Racecourse, said: “Funny, he did the same thing again today - he was nearly going too free down the back and he took him back a bit and then he fell asleep again.

“He (Cooper) felt if he jumped the last, he was going to pick him (Riaan) up. He sort of comes and goes a little bit I thought, but he loves the ground. He does stay fairly well.”

IT was a red-letter day for trainer Gerald Quinn when Invictus World and Noel McParlan fended off Reginalds Tower by half a length in the GavinLynchRacing.com (P-A) INH Flat Race.

Quinn said of the 12/1 chance: “That’s our first (winner) in Ireland. We’ve had a few across the water, but it’s great to get one here. You’re competing with the best here. We’re based in Broughshane, Co Antrim. We’ve 35 horses now at the moment, a few point-to-pointers.

“We always thought a lot of him, he’s a lovely horse. He had decent form. I train all the horses for the land owner, Philip McBurney, he owns the majority of them.”

McParlan was handed a two-day ban for excessive frequency with the whip.”

Grozni was backed from 4/1 to 2/1 favourite and obliged for the Byrnes family in the NavanRacecourse.ie Handicap Hurdle.

The six-year-old gelding came with a sustained challenge to get the measure of Gondor in the closing stages. Philip Byrnes, sporting his brother Cathal Byrnes’ colours, drove him home by a length and a half.

Trainer Charles Byrnes said: “That’s all he did again today is stay on. The trip and the track helped. More of the same is coming as he loves this fast, summer ground, however long that will last.”

Grozni was well beaten at Listowel on Monday when favourite.