Title: LOOKING BACK: The response was immediate and memorable 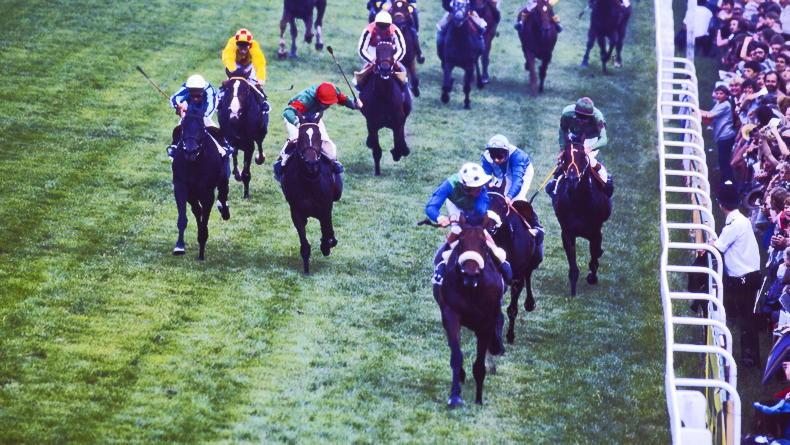 Golden Fleece wins the 1982 Derby at Epsom under Pat Eddery 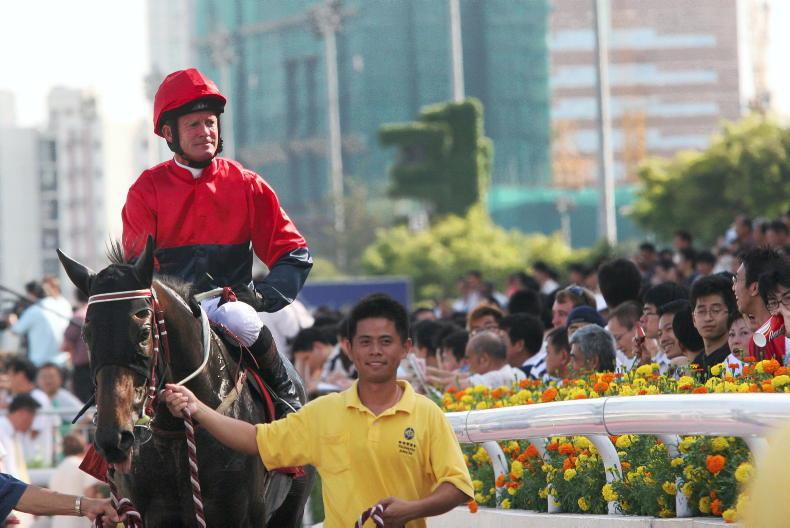 Viva Pataca being led in after winning the Champions and Chater Cup at Sha Tin, with Michael Kinane in the saddle 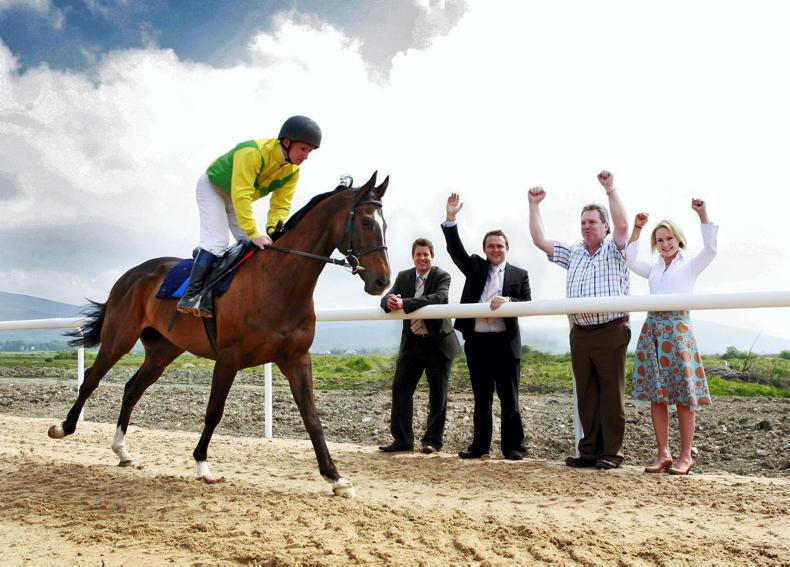 JUST over half a mile from the finish of the Derby on Wednesday only an optimist, or a clairvoyant, could seriously have believed at Golden Fleece could win the prize.

Close to the rails coming down to Tattenham Corner, with only two or three horses behind him, Golden Fleece seemed to offer little prospect of any sort of dividend for those who had made him the 3/1 favourite. Golden Fleece had already made up many lengths in an extraordinary short space, but only now did Pat Eddery ask him a serious question.

The response was immediate and memorable. Golden Fleece soared into the lead a furlong and a half out and, though hanging left with the sharp camber of the course, he came away from his pursuers to win in the style of a champion.

The day belonged to Golden Fleece, a big, heavy horse who, like many of the runners on Wednesday, sweated freely in the long, drawn-out preliminaries. By Nijinsky out of the unraced Exotic Treat, he cost Robert Sangster and his partners $775,000 as a yearling at the Keeneland Summer Sale.

Vincent O’Brien, in his supreme moment of triumph, was calm and relaxed, and endlessly patient as he answered a variety of questions thrown at him. The trainer has always been a master of detail, and he was entitled to be pleased with his efforts to settle Golden Fleece, after a nasty experience last year, had paid such handsome dividends.

Golden Fleece’s size may have had something to do with his claustrophobia last year, but countless journeys by horsebox in the winter had solved that problem, and any lingering fears of the starting stalls were dispelled by patient and gentle practice in the stalls at home.

There remained the task of transporting him to England for the Derby. O’Brien explained: “We tried him out on a small plane on my farm and he was not happy with that. Eventually, I made arrangements to send him by boat on Sunday, but I decided at the last minute to fly him over in a bigger plane on Saturday, so that if he became upset on the runway he could still come by boat.”

The Derby time of 2m 34.27secs was the fastest electronically-recorded time, and only half a second outside Mahmoud’s record, set in 1936, which was hand-timed.

[Sadly Golden Fleece never raced again and went to stud at Coolmore, undefeated in four starts. Disaster stuck when he died after just one season in the breeding shed.

He sired 59 foals, 50 of which raced and 33 of them won. Six won at stakes level, namely Pixie Erin (Group 3 winner in Ireland), Colchis Island (in the USA where he was Grade 2 placed), King’s College (in Ireland and South Africa and group-placed), Sidara (in France), Golden Dome (in Ireland), and Golden Temple (in Ireland). His stakes-placed runners were Golden Isle, Gold Discovery, Bow Bloom, Colchis, and Microcosme.

HOW does Michael Kinane fill his diary?

With scores of winners, obviously, but even so events last weekend stretched things to near fantasy proportions. While Frankie Dettori was the talk of the thoroughbred world after his Derby double [Authorized at Epsom and Lawman in France], Kinane went a continent further to secure his own equally satisfying big race brace.

Last Friday he won the Group 1 Vodafone Coronation Cup at Epsom on Scorpion for Ballydoyle, only to be levelled a day later as he partnered Archipenko to trail home last in the Derby. ‘Oh well, at least I bred the winner’ the man from Killenaule might well have thought as he dismounted in the race he had already won twice.

‘Next thing I am going to do is get on a private jet belonging to one of the world’s richest people and fly to Hong Kong. Then I am going to land within minutes of declaration time, batter the opposition and break a track record in the Champions and Chater Cup on Viva Pataca to ensure he ends up Horse of the Year.

‘After that I’ll go home and ride six at Naas on Monday, because it’s no good having nothing to do!’

From a Hong Kong perspective, Kinane’s strike-rate this season is lethal; he has had just nine rides and the last three have produced Group 1 successes on Able One in the Champions Mile, and Viva Pataca in both the Audemars Piquet QEII Cup in April and last Sunday, his second straight victory in the Champions and Chater Cup aboard the same horse.

Senior figures within the Hong Kong Jockey Club and the territory’s association of racing journalists have yet to officially identify the Horse of the Year, but Viva Pataca is a shoo-in for the prestigious award after destroying Dubai Sheema Classic winner Vengeance Of Rain by over four lengths. In so doing, last year’s Hong Kong Derby winner lowered the Sha Tin 12-furlong record that has stood since 1994.

“That’s why I made the effort to come here and ride him today. I didn’t want anyone else riding him. I’m not a bit tired really, adrenaline is a great thing and this is a special horse,” remarked Kinane in the aftermath of victory.

“I won the Coronation Cup on Friday and I’ve no doubt Viva Pataca is right up to that class. He’d be competitive in a race like the King George, and I’d love to ride him wherever he goes. He’s a high-class horse.”

[Bought for 26,000gns as a yearling, Viva Pataca raced in England as Comic Strip. The son of Marju, and a half-brother to the dual US Grade 1 winner Laughing, was a listed winner at two, one of five successes he enjoyed as a juvenile. Those five wins netted his owners just under £60,000.

In Hong Kong, where he was twice rated champion, his 13 successes were worth £5.9 million to his owner Stanley Ho, He won the Group 1 Queen Elizabeth II Cup twice, added a third Champions and Chater Cup (he was placed in the race three times also), two Hong Kong Gold Cups and more]

JUST 5,500 members of the public will be allowed through the turnstiles for Ireland’s first race meeting staged on a synthetic surface at Dundalk Stadium on Sunday, August 26th.

The historic fixture will be the country’s first ticket-only meeting, and they will go on sale next Monday. Emma Meehan, sales and marketing manager at the complex, said that the seven-race card will be preceded by a gala opening ceremony. A commemorative pin will be given to each patron to mark the occasion.

“We plan to sell approximately 5,500 tickets, with a maximum application of 6,500 which would include members and racing clubs,” Meehan said. Demand for tickets is likely to be high. Tickets are priced at €20, with concessions available. The standard admission fee will be reduced to €15 for subsequent meetings.

An estimated 18,000 people attended the official opening of the new Limerick racecourse in October 2001, while some 10,500 racegoers witnessed the relaunch of Cork racecourse, Mallow in May 1997.

The polytrack surface has been laid and some preliminary trials have been stage. 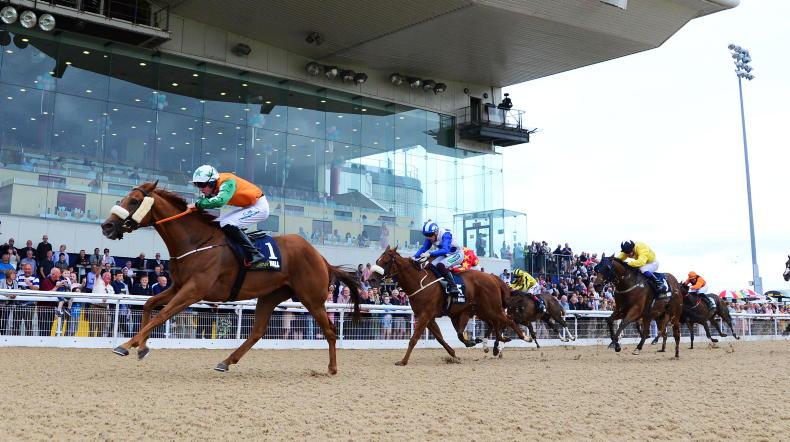 Michael Graham
DUNDALK TUESDAY: Harry’s Bar powers to a fifth win for McGuinness
The Ado McGuinness-trained gelding defied a mark of 105 with a powerful performance in the opening five-furlong handicap at Dundalk on Tuesday 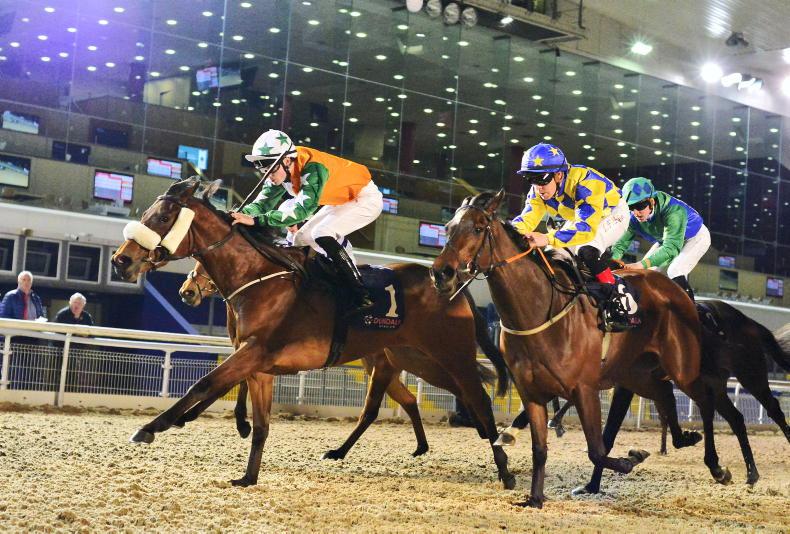 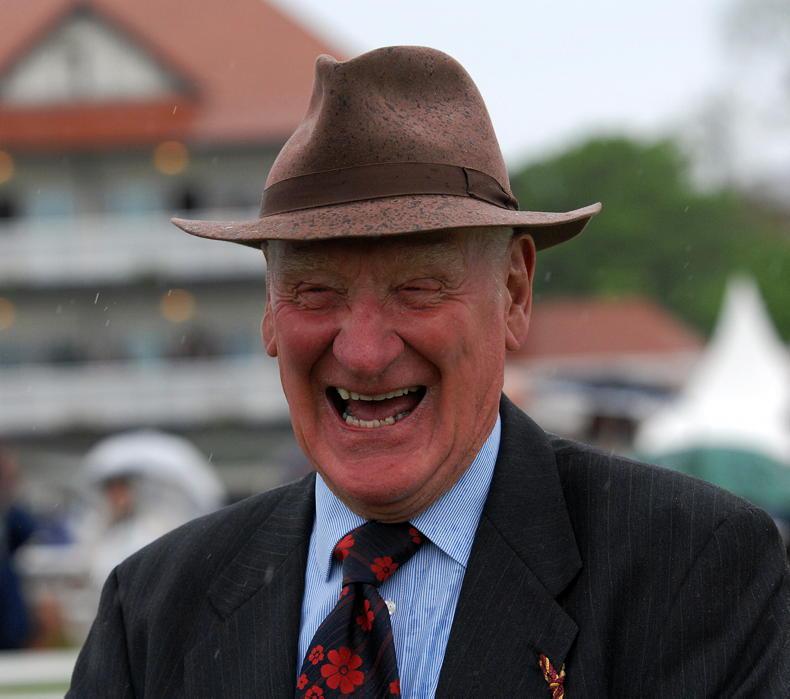