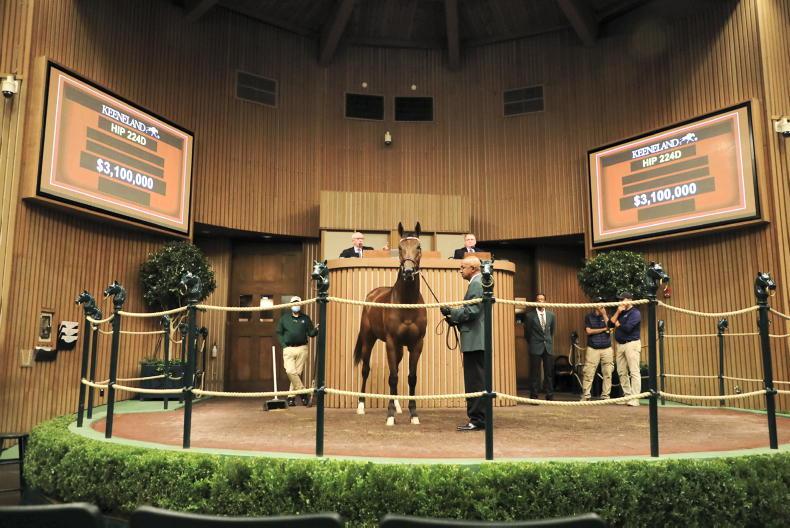 BOOK 1 of the Keeneland November Sale was a one-day affair, and Spendthrift Farm paid $3.1 million for the Grade 1-winning Curlin filly Paris Lights to head Wednesday’s Book 1 opening session of the marathon sale.

Supplemented to the sale, Paris Lights was offered at the end of the day’s selling, which saw seven of the 118 lots that traded realise seven-figure sums.

The session also saw the highest price paid for a foal at public auction in America this year. The average and median figures showed a healthy growth on 12 months ago,

“Overall it was a very honest, fair, encouraging session,” Keeneland’s vice president of sales, Tony Lacy, said. “The popularity and success of American pedigrees across the world is evident. As we welcome more visitors from around the world, we see a more diverse group.”

Paris Lights was consigned by ELiTE as a racing and broodmare prospect. A four-year-old daughter of the winning Bernardini mare Paris Bikini, she is from the family of broodmare of year Better Than Honour. Spendthrift general manager Ned Toffey said: “I think she will fit Into Mischief [stands at Spendthrift] really well. We are happy to have her.”

Toffey added: “The market is very strong. It was pretty good across the board and very competitive. We were hoping to get her for less. She comes from as good a family as we have in the stud book. We are trying to add select mares to our broodmare band.”

Japanese buyer Masahiro Miki, who was very active at the previous days’ Fasig-Tipton Sale, paid $2.3 million for the Grade 3-winning Tapit mare Pink Sands, carrying her first foal by Into Mischief. The six-year-old is out of Grade 1 winner Her Smile.

“She exceeded what we thought we’d get for her coming here by a bit,” Gainesway general manager Brian Graves said. “It wasn’t a lot more than we felt we could possibly get for her, but obviously everybody’s really happy. She was really quality. We felt we had a chance to be one of the best mares in Book 1 with her, and we’re just really thrilled with that.” Miki was the session’s leading buyer, spending $3,675,000 for three horses.

Claiborne Farm went to $1.4 million to acquire the Irish-bred Satin And Silk, a four-year-old daughter of Galileo carrying her first foal by undefeated Triple Crown winner Justify. The mare is a half-sister to Grade 1 winner Materiality and Grade 2 winner and Grade 1-placed My Miss Sophia, and is from the family of Grade 1 winners Embellish The Lace and Afleet Express.

“She’s for a farm client,” said Bernie Sams, Claiborne’s bloodstock manager. “We liked her, and My Miss Sophia is at the farm and we know the family.” The pedigree had a recent update when a War Front son of My Miss Sophia, Annapolis, won the Grade 2 Pilgrim Stakes at Belmont.

Stonestreet Thoroughbred Holdings spent $1.15 million for the Scat Daddy mare Downside Scenario, who is carrying a full-sister or brother to Grade 2 winner Mutasaabeq. The eight-year-old is a half-sister to Group 3 winner Cool Cowboy. “That was a little above expectations,” vendor Will Daugherty of BlackRidge Stables said.

He added: “We bought this mare in 2018 for $250,000 and obviously had a great success right off the bat with Mutasaabeq [sold for $425,000 at the 2018 November Sale]. She just kept delivering for us all the way through to the end. We had a great partner in Randy Hill on her from start to finish. We’re glad to see her move on.”

Three horses sold for $1.2 million each. Dana Bernhard paid that amount for the stakes-placed Tapit filly Mind Out, catalogued as a broodmare prospect. She is a four-year-old half-sister to Canadian champion Miss Mischief and they are from the family of Grade 1 winners J P’s Gusto and Letruska.

“She’s a beautiful Tapit filly, showed a lot of talent on the track,” said Matt Weinmann who acted for the buyer. “It’s a really nice family. We’ve played with a few horses in that family.

“We’re really excited about her. The Bernhards are just getting their broodmare band going, and she’s going to be one of our standout broodmares at the farm.”

Bernhard also spent $700,000 for Glitter And Gold, a Bodemeister half-sister to champion Swiss Skydiver who is in foal to Curlin. “Those are our first two broodmares,” Weinmann said, “and we’ll see where it goes from here.”

Grade 1 winner Maxim Rate, a five-year-old daughter of Exchange Rate, sold to Ever Union Shokai for $1.2 million. Ken Mishima, who signed the purchase docket, said Maxim Rate would go to Japan to be bred. “The price was high, but she is a nice mare,” he said.

Mt. Brilliant Farm spent $1.2 million for the supplementary entry Look Me Over, a half-sister to the weekend’s undefeated Grade 1 Breeders’ Cup Juvenile winner, and the likely champion two-year-old colt Corniche. She is a four-year-old mare who is carrying her first foal by Kitten’s Joy. Greg Goodman said: “We loved her, she was our first choice. We’re really happy. She’s beautiful.”

At $800,000, the session’s top-priced foal was a daughter of Frankel, a half-sister to Group 1 winner and Coolmore sire Arizona, and his Grade 2 winning own-sister Nay Lady Nay. She was purchased by Phil Schoenthal for Matt Dorman’s D. Hatman Thoroughbreds. The filly’s dam is by the recently deceased English Channel and from the family of European champion Dabirsim and Group 1 winner Bright Generation.

Dorman said having Frankel as her sire made the filly especially attractive. “It’s a great page, great family,” Dorman said, “and she’s got great conformation, so she ticked all the boxes. She’ll be in the racing programme and hopefully improve her page and go from there. She’s long term for us.” The buyer added: “The market is pretty strong. There’s some really good horses that people have brought out, and there’s still a lot of pent-up demand.”

Thursday saw the opening session of the two-day Book 2 catalogue, and this was topped when Coolmore’s M.V. Magnier spent $625,000 for Just Before Dawn, a colt foal by the undefeated Triple Crown winner Justify. He is a half-brother to multiple Grade 1 winner Moonshine Memories. The session produced figures that were well ahead of the same day last year.

Just Before Dawn is out of the winning Unbridled’s Song mare Unenchantedevening and he is from the family of Horse of the Year Favorite Trick and Grade 1 winner Tiz The Law. Coolmore stands Justify and Tiz the Law.

“He’s a really nice horse,” Magnier said. “Jane Lyon and everyone at Summer Wind Farm are very good breeders. This horse is very well-bred, and we have had a lot of luck with the family before. We have 11 or 12 Justifys going to Ballydoyle next year.