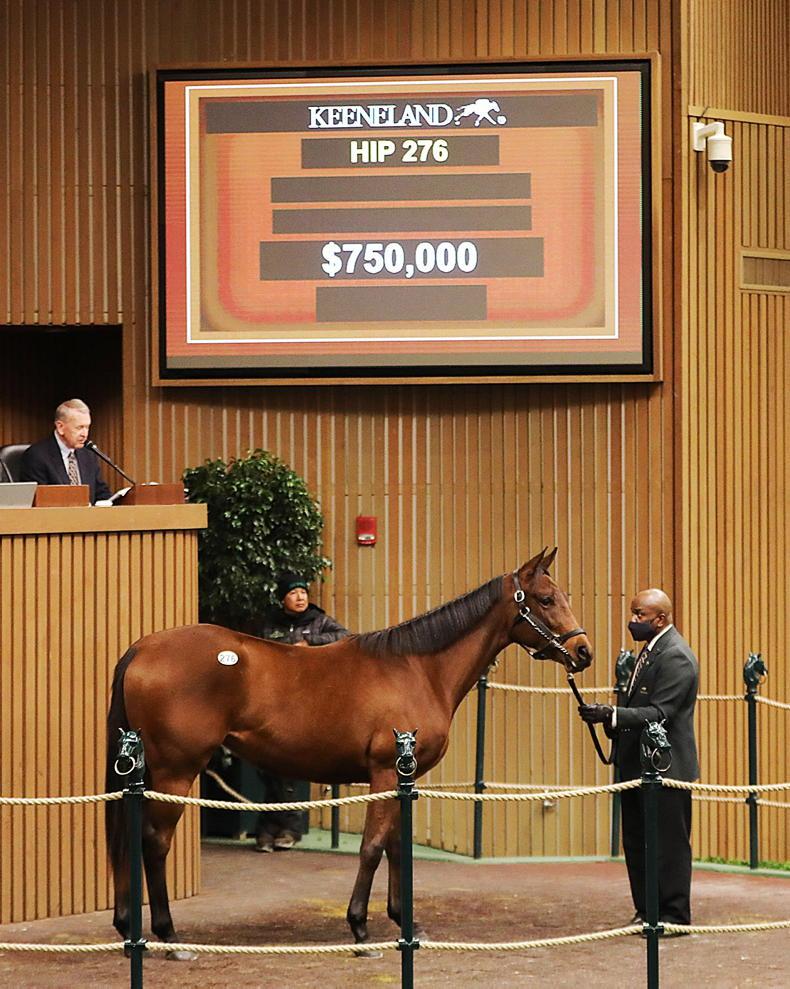 Princesse Lele topped the delayed opening session of the Keeneland January Sale at $750,000 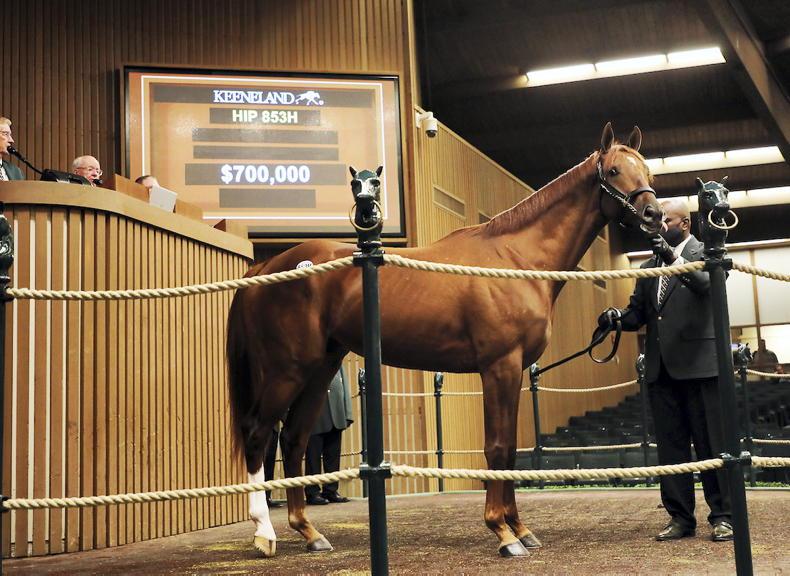 DELAYED by a day due to snow, the 2022 Keeneland January Horses of Racing Age Sale got off to a strong start on Tuesday with brisk trade from start to finish.

The session, and the sale to date, was led by the sale of Princesse Lele, a two-year-old filly by Quality Road out of Grade 1 winner Carina Mia, for $750,000 to Three Chimneys Farm.

Hazardous weather conditions led to the sale being delayed. “Our top priority is the safety of the horses and sales participants, and the delayed start to the sale will allow for their safe arrival and give consignors adequate time to show their horses,” Keeneland vice president of sales Tony Lacy said. “Our customers have been virtually unanimous in their recommendation to make this change.”

After the opening day Lacy said: “We were expecting a good day of trade with some nice quality toward the end, and that’s the way it happened. The numbers were pretty stable with last year until about halfway through the day.

“Then they starting creeping ahead. We are up nearly 49% on gross from 2021, so that’s really strong for the first day. There continues to be a lot of positivity. Demand for quality was as eager as ever.”

Three Chimneys Farm was the day’s leading buyer, spending $1.16 million to acquire Princesse Lele and another juvenile filly, Justly, for $410,000. Justly is a daughter of Triple Crown winner Justify and champion Take Charge Brandi, by Giant’s Causeway. She descends from the Grade 1 winner and Broodmare of the Year Take Charge Lady.

Three Chimneys teamed with Whisper Hill Farm to pay $470,000 for the Grade 3-placed Remedy, a seven-year-old mare by Creative Cause from the family of two-time champion Beholder, leading sire Into Mischief and Grade 1 winner and young stallion Mendelssohn.

The 11-year-old stakes-winning Ghostzapper mare Haunted Heroine, dam of the December 26th Grade 2 Santa Anita Mathis Mile winner Law Professor, sold to Andrew Warren for $420,000. Out of Mona Mia, by Monarchos, she is a half-sister to Grade 1 winner and millionaire Celestine. Mike Cline, who signed the ticket for Haunted Heroine, said the mare would be bred to City Of Light.

Eight-time stakes winner Hello Beautiful, a five-year-old daughter of Golden Lad who was supplemented to sale, sold for $410,000 to Larry Best’s OXO Equine.

The last shall be best

THE three-year-old Hard Spun colt Belgrade, who opened his racing career in December with an impressive victory, was the final horse offered during the second day of the Keeneland January Sale and topped the session when he sold for $700,000 to Carl and Yurie Pascarella. He will be trained by Graham Motion.

Numbers on the second day were down compared to 12 months earlier. Tony Lacy explained: “Last year on this day we had the Paul Pompa and Sam-Son dispersals, so there were big shoes to fill, but we maintained the median at $40,000.

“The quality horses were extremely popular. It was all very fair, and trade was strong and solid all the way through. A lot of smiling faces.”

Belgrade opened his career on December 18th at Fair Grounds with a six-length maiden special weight victory. Jane Buchanan, racing manager for Motion, signed the ticket. “We have followed him. We liked how he won,” Buchanan said. “We tried to buy him privately after his race. We liked how he did it; he ran good numbers.”

Belgrade and three other horses who were supplemented to the January Sale, Susie’s Baby at $600,000 and Her World and Saucy Lady T at $425,000, were responsible for four of the session’s highest prices. Susie’s Baby joined Co Cola as pregnant broodmares who sold for $600,000 each.

Cypress Creek paid $600,000 for Susie’s Baby, a stakes-producing daughter of Giant’s Causeway who is a half-sister to Caravaggio and is in foal to Constitution. In 2021, her daughter Family Way won the Kentucky Downs Ladies Marathon.

Co Cola, an 11-year-old daughter of Candy Ride who is carrying a full-sibling to Flatter’s 2021 Grade 1 winning daughter Search Results, sold to Peter Blum. Search Results is a candidate to be named as a finalist for the 2021 Eclipse Award as champion three-year-old filly. “Being in foal to Flatter was a draw,” said Jonathan Harrison who manages Blum’s broodmares.

Narvick International paid $500,000 for Bella Vita, a five-year-old stakes-winning daughter of Bayern. She is from the family of champion Vindication, and out of a Storm Cat mare.

“She is a very good racing filly and a beautiful type,” Narvick’s Emmanuel de Seroux said. “She has an excellent female line.” While saying Bella Vita’s primary appeal is her broodmare potential, de Seroux said she is scheduled to return to racing.

Saucy Lady T, a three-year-old daughter of Tonalist who was third in the 2021 Grade 1 Spinaway Stakes, sold for $425,000 to Gary Broad/Walmac Farm. She is out of stakes winner Fila Prima, by War Front, and from the family of 2021 Grade 1 Cotillion Stakes winner Clairiere.

Andrew Farm went to $425,000 for the Irish-bred Her World, a three-year-old stakes-winning daughter of Caravaggio. She is out of an Unbridled’s Song half-sister to English stakes winner Consort and from the family of Grade 1 winner Aruna.

Thursday’s third day of selling saw one standout lot from the rest, and she was appropriately named.

The five-year-old Crowning Jewel, a half-sister to champion and Grade 1 Kentucky Derby winner Street Sense and in foal to Street Boss, sold to Frank Stronach’s Adena Springs for $480,000. This is the highest price recorded on the third day of the January Sale since 2005.

“The pedigree is everything,” buyer Dan Hall said. “She’s by Into Mischief and a half to Street Sense – a great family. She was a typical-looking Into Mischief mare and is a family Frank wanted to get into.” Godolphin consigned Crowning Jewel and received $1,434,500 for 26 horses.

He said: “We try to keep a broodmare band where we can have about 100 two-year-olds every year. We work off that number. The ones that have not raced or not won are the ones that probably will go to a sale.”