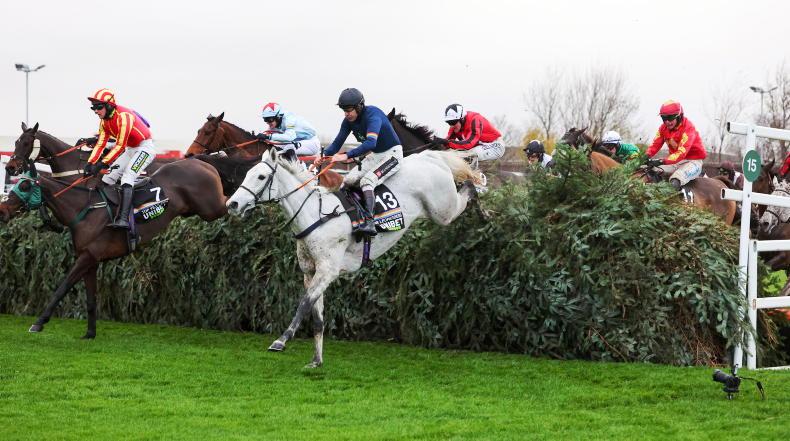 Aintree racecourse has been the scene of many famous celebrations down the years. And racegoers should be braced if the grey Snow Leopardess manages to complete her fairytale career with a victory on April 9th.

The Becher Chase winner has not exactly followed the tried-and-tested route to Liverpool – but will return to Merseyside as the most fancied British-trained contender.

Her backstory really is out of the realms of make believe, as on her way home from a successful foray to France in 2017, she picked up an injury and rather than recuperate in the normal fashion, Snow Leopardess went to visit the Derby winner Sir Percy and gave birth to a foal.

Instances of mares returning to racing having given birth are rare in any case, but for them to reach the heights of challenging for Grand National favouritism is simply unheard of.

“It’s quite surreal looking at the National and being connected to a leading fancy, but it’s all down to my mother-in-law,” said Plunkett.

“She’s a quite extraordinary equestrian character. She’s been at the forefront of the equestrian world for 60 years. She represented Great Britain at the European Championships, she’s been second at Burghley, she won the Melton Hunt race twice – once after she’d had her children funnily enough.

“Because she lived in Kent, she owned horses which raced in France as a young woman and won a couple of big races there and she has always bred horses, eventers, racehorses – she lives and breathes horses. She does everything herself and is the last of the old school.

“She’s best friends with Jessie Harrington and is an extraordinary horsewoman, so to now have a horse like Snow Leopardess, that she foaled and produced herself, is pretty amazing.

“It’s the culmination of a lifetime of breeding and while it sounds ridiculous, this mare is the horse incarnation of her – they are both tough as old boots and unbelievably beautiful. When Marietta was younger she was drop-dead gorgeous, but when everyone else was reading Vogue she was reading Farmers Weekly!”

Right from beating a Nicky Henderson-trained subsequent Cheltenham Festival runner-up on debut at Doncaster, Snow Leopardess has defied the odds. Like she did when going to win a listed bumper at Gowran Park and winning a valuable prize at Auteuil.

“Jessie flagged up the listed bumper at Gowran and Marietta’s connections in France meant that she wanted to run her in the French race she won. She stayed over hurdles quite a long time – the rest of us were keen to see her over fences but Marietta was keen to stay hurdling and it wasn’t until she’d had the foal, keeping the family line, that she was convinced about going chasing,” explained Plunkett.

“She got a knock in the lorry on the way home from France and came back to us for her rehab, but she then jiggered it again so she went to Ireland, thanks to Jessie, to a guy called Paul Roche in Wexford who had her swimming in the sea for three months and then she came back into training.

“While she has had some random targets like Gowran and France, she’s met every one – bar winning at the Cheltenham Festival when she was fourth behind Galvin, who was one of the favourites for the Gold Cup.

“I saw Nicky Henderson recently and he reminded me of when she made her debut at Doncaster as he really fancied his (Rather Be), but this mare from Charlie Longsdon’s, his old apprentice, came and beat him!

“The form of all her races has always held up. Look at the Bangor race this year, the horse she beat (Windsor Avenue) went and won the Sky Bet Chase.”

Now 10, Snow Leopardess might be seen by some to be slightly past her peak but as she was off the track for almost 800 days, the National will be only her 20th race.

“Technically she’s only a second-season novice despite being 10. She’s a really big mare. Marietta wanted to get her galloping early, so she sent her to Ralph Beckett which seemed strange at the time but as with everything she does, there was a method in her madness. She learned a lot there without being put under pressure,” said Plunkett.

“They’ve changed things slightly this year as she likes being ridden handy now, which could be tricky in a National. I thought it showed at Exeter, she looked much happier when hitting the front but Aidan (Coleman) knows her really well and has confidence in her.

“For sure we’ll need some rain but she travels in a lovely rhythm, so you wouldn’t want to get her out of that. She’s very comfortable travelling at a very good speed but if something took off like Jett last year, I don’t think that would suit her.”

Her victory in the Becher over the National fences came in filthy conditions and even a hardened trainer like Longsdon was fighting back the tears. Having led for the most of the way, too, she only held on by a nose at the finish.

“It would have been terrible had she got beat in the Becher. We were all at Sandown with ITV and I didn’t appreciate how close it was, it was only when the photo wasn’t called straight away I realised,” said Plunkett.

“I dread to think what I’ll be like if she does win. I’ve been doing terrestrial TV for 24 years and I’m renowned for being horrendously emotional. I think it is because I’m aware of what goes into each and every winner.

“It takes so much to go right, so many people are involved, it’s such a journey. Even going back to the mating, everything has to go without a hitch.

“For instance Marietta, who is 81 now, had a broken hip when she was supposed to go and visit Martaline, to see if he was suitable for Queen Soraya (dam of Snow Leopardess), so she sent my sister-in-law off to go and see Martaline and get a video! Thankfully the decision was made he was good enough. When her hip was better she even drove Queen Soraya to France herself.

“Even how she got her name is ridiculous. The lady who helps Marietta in the office thought she had registered a name but she’d actually registered her to go eventing, not racing, so a few days before her debut at Doncaster, Charlie rang saying we need a name. Well Marietta was watching a movie with a snow leopard in it so that’s where it comes from. But it fits her so well.

“Many thought she was mad putting the mare in foal while she was injured and I can’t imagine there has been a runner in the National that has had a foal, but as Marietta said ‘having children didn’t break my stride, so I don’t see why it should with her’.

“This is genuinely all about Marietta, this is about a lifelong work so I’m so pleased for her. They don’t make them like her anymore.”

The story of Aldaniti and Bob Champion was told in a film – it would be no surprise if the story of Snow Leopardess hits the big screens one day.