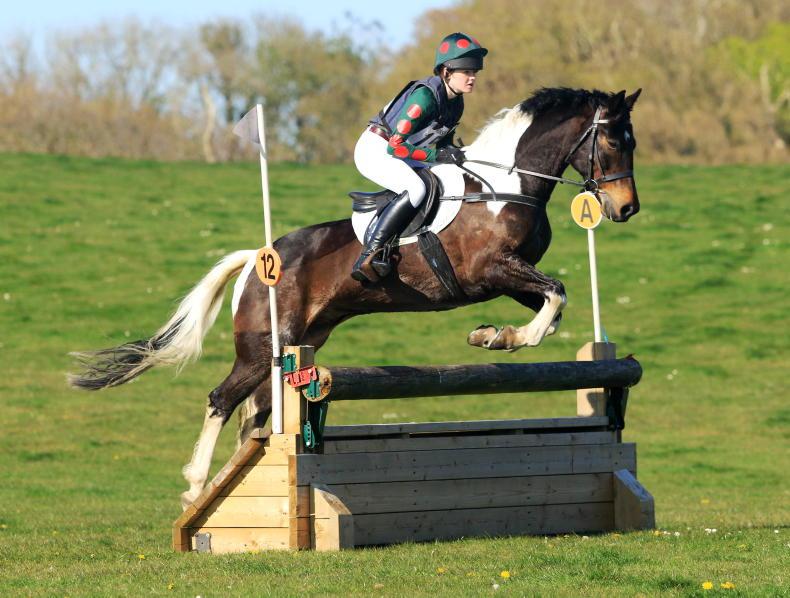 Abby Cummiskey led the 18-runner class after dressage on 22.3 with MJI Cabernet but had to settle for second when lowering two show jumps while Anna Corinne White completed on her first phase score with Kilcoltrim Dora (31.3) on whom she was successful at this level at Loughanmore last September.

There was a rare victory for Co Donegal when Sorcha Hanly led from start to finish in the three-runner EI110 (J) on Sharon Friel’s Irish Sport Horse gelding, My Seafield Romeo (53.9).

While picking up eight show jumping penalties and 6.4 for time across the country, this was a first completion in four starts this season for Hanly and the Seafield Silver Dun 12-year-old who she campaigned in EI100 (P) classes last term.

Just two combinations started in the EI100 (P) class where, when her rival was eliminated, Alex O’Hare finished alone, on her dressage score (25 penalties), with her mother Donna’s 12-year-old British-bred mare, Greylands Diamond Girl. From nearby Newcastle, O’Hare is currently based in Co Kildare as she is a working pupil in Cathal Daniels’s yard.

The five-strong EI90 (P) class was dominated by the Gilchrist sisters from Downpatrick with Sarah leading from start to finish on Hazeldene Mighty Max (37.3), a seven-year-old skewbald ISH gelding by Annaghmore Ginger, while Jennifer placed second on Lackaghmore Vandango (51.3).