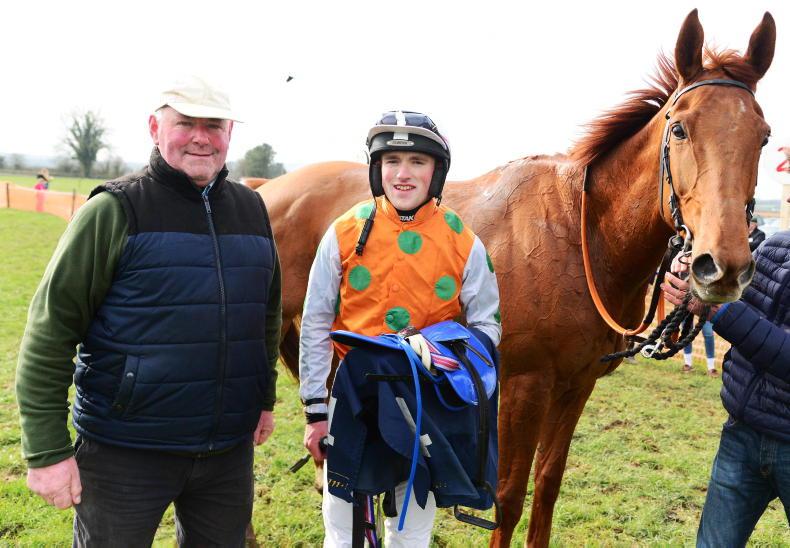 Jockey Robbie Jackson with dad Tony after Is A Real Champ won the open in Ballyragget \ Healy Racing.

HIGH Stakes followed in the footsteps of Mr Bolt by becoming just the second horse in the 10-year history of the champion point-to-point horse title to earn that crown in the same season that they had won their maiden races.

Four victories throughout last season’s heavily interrupted point-to-point campaign was sufficient for John Walsh’s then seven-year-old to claim the title, a prize which traditionally had been the staple of leading open lightweight performers.

His 2021 success was in fact the first time that a horse had won the champion point-to-point horse title without even contesting a single open race.

That won’t be repeated this season, however this year’s title race does feature two horses who similarly had also started this season as a maiden.

That pair – Sean Doyle’s Is A Real Champ and the Willie Murphy-trained Rose Of Coolbally – both won their maiden races within two weeks of each other throughout the autumn term and have since worked their way up through the ranks in each of the grades in winners’ company.

It takes a progressive and resilient performer to progress in such a manner through a single season, particularly when then faced with the jump into the open lightweight division, a task that Is A Real Champ mastered last month by winning on his open debut in Ballyragget.

Is A Real Champ and Rose Of Coolbally are two of six horses currently sitting on the four-winner mark, a list that also currently features Ifeoinly, Lord Schnitzel, Mighty Stowaway and Some Man. With Mighty Stowaway having been sold to join the British yard of Lawney Hill following his third-place finish in Cheltenham’s Foxhunter Chase, it does reduce the list of contenders by one, a field that includes two mares in the aforementioned Rose Of Coolbally and Eoin McCarthy’s Ifeoinly.

Carrigeen Acebo was the first mare to take the champion point-to-point horse title back in 2015, and Dick Lalor’s history maker will incidentally have her first three-year-old offered for sale next month, with a Doyen filly who has inherited her mother’s grey colouring, featuring in the catalogue for Goffs UK Spring Store Sale at Doncaster.

With just six weekends of racing remaining before the season comes to a close, there is no question of any of this year’s title contenders coming anywhere close to the record-breaking tally of 13 wins achieved by Kruzhlinin and Longhouse Music in 2019, however the outcome is as open as it has been for some time.

There are a further nine horses behind them on the three-winner mark to ensure there are plenty of twists and turns to come in this title race.

TOMORROW’S card at Monksgrange plays host to the most valuable race of the season with the INHSC Winners Final set to take centre stage at the Bree Foxhounds fixture.

This will be just the second edition of the race following its introduction in 2019 following cancellations of the race at Oldcastle in April and December of 2020 and at Monksgrange last year. The Wexford venue has a second chance to host the race which boasts a prize fund of €5,000 and it has been well received attracting an entry of 19 horses from right across the country.

Created in an effort to boost the older division of horses in the sport, it is confined to horses aged six and older who had not won a race before the start of the current season that have since finished in the first four at least once.

Sixteen of the 19 entries are horses that have won maiden races this season spearheaded by pair of this year’s four-time winners in Is A Real Champ and the mare Rose Of Coolbally.