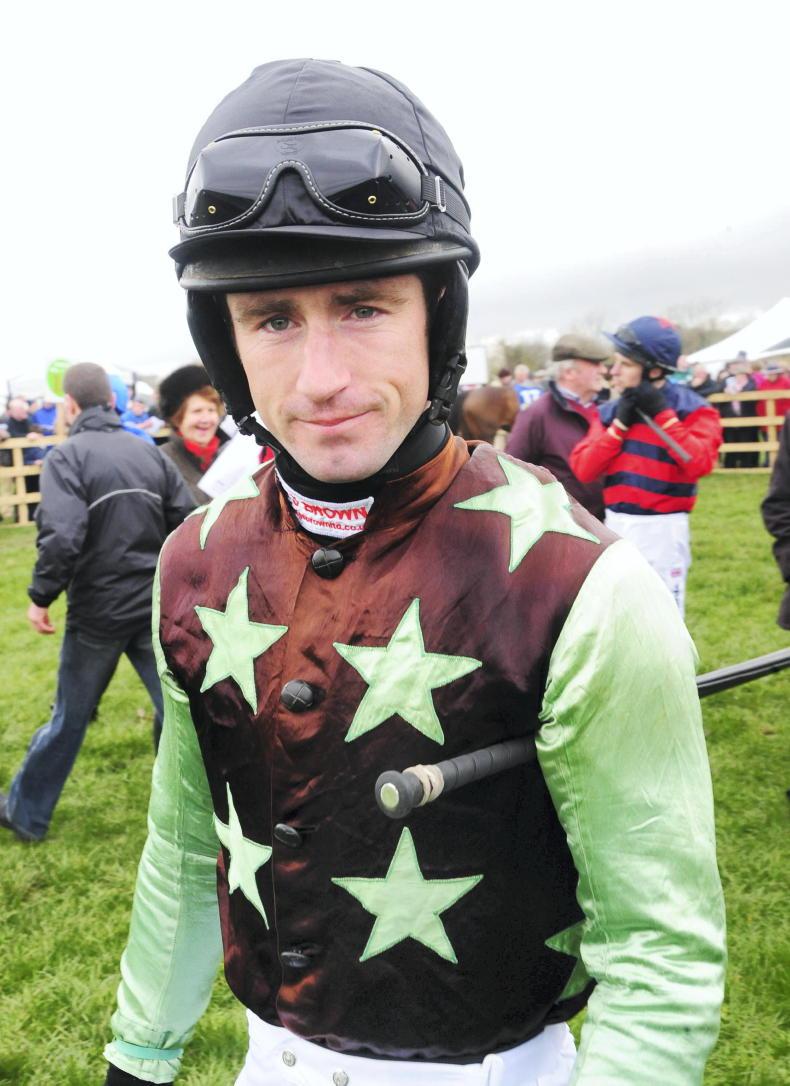 IT was a busy weekend on the British point-to-point circuit, with five meetings on both Saturday and Sunday, and it was a successful one for Will Biddick who increased his lead at the top of the men’s championship table with one win at Cotley on Saturday and a four-timer at Trebudannon on Sunday.

The first of these was the only Irish-bred winner on the seven-race card, the 2015 Stowaway gelding Knockmoylan who brought up a hat-trick in British point-to-points when landing the opening three-runner intermediate.

Biddick completed his four-timer in the concluding eight-runner maiden on the Tom Malone-owned and trained German-bred Zumbi. This five-year-old Reliable Man gelding was having his first start in Britain having been trained here previously by Aidan Fitzgerald.

Co Meath’s Martin McIntyre landed the four-, five- and six-year-old mares’ maiden here on the Leslie Jefford-trained, British-bred Walkin Out, a five-year-old Walk In The Park bay who was making her point-to-point debut having run twice over hurdles in France.

McIntyre too was at Cotley on Saturday when he bettered Biddick’s performance with a double, getting off the mark in the restricted on the Mike Vanstone-trained 10-year-old Craigsteel gelding, Steel Express.

The double came up in the maiden conditions race on the Sam Loxton-trained Westhill, a seven-year-old Westerner gelding who was one of five Irish-bred winners on the seven-race card. The bay, who is out of the unraced but well-related Presenting mare Brogarais, was a €105,000 purchase by his previous trainer, Paul Nicholls, and Tom Malone at the 2018 Derby Sale.

Biddick had to wait until the concluding six-runner maiden to register his success and did so on the eight-year-old September Storm gelding Ninth Wave, who he trains.

Bred by Martin McCaughey out of the Cloudings mare Royale Pearl, the bay has had a number of homes since winning a point-to-point bumper at Bitterley for the Phil Rowley yard in April 2018.

Sixteen-year-old Freddie Gingell increased his lead at the top of the novice riders’ table when landing the four-runner men’s open on the odds-on favourite Molineaux, the 11-year-old King’s Theatre gelding owned and trained by the rider’s grandfather, Colin Tizzard.

Co Galway-born Daniel Kyne partnered three winners over the weekend. On Saturday, he was at Parham where he rode two winners for trainer Robert Varnham.

On Sunday, Kyne travelled to Larkhill where he landed the six-year-old and upwards maiden on the Heidi Brookshaw-trained Spectacular Rival, a seven-year-old Sageburg gelding who is out of the Singspiel mare, Consuelita.

With six runners, this was the biggest field of the day at the New Forest Hounds fixture where there was one void race (the younger horses’ maiden) and a walkover in the opening Level 3 conditions race for the Alice Procter-ridden, Keiran Burke-trained Golden Poet.

The 10-year-old Urban Poet gelding provided connections with the second leg of a ‘double’ when winning the novice riders’ race. Racegoers had some excitement as there was dead-heat in the two-runner mixed open.

The German-bred gelding Lessankan, who won a maiden here recently when trained by Aidan Fitzgerald for Olympic event rider Sam Watson and his wife Sparkles, landed the three-runner restricted at Howick on Saturday.

A 200th winner between the flags for rider Bradley Gibbs, the seven-year-old Samum gelding ran in the colours of trainer David Brace.

None of the three hunters’ chases staged up to Monday past were over the traditional distance of three miles.

The closest (2m 7f) was the two-runner race at Ascot last Sunday where the David Kemp-owned and trained Law Of Gold, a nine-year-old Gold Well gelding, ran out the 46-length winner under Dale Peters.

The well-beaten favourite was Adrien du Pont whose Downpatrick-born owner/rider, David Maxwell, and trainer, Paul Nicholls, won the two and a half-mile hunters’ chase at Ludlow on Wednesday week last with another French-bred gelding, Stratagem.

Also at Ludlow, but on Monday of this week, Co Galway native Tommie O’Brien won the hunters’ chase over the same trip on the 13-year-old Dylan Thomas gelding, Bletchley Castle, who is trained by Heidi Brookshaw.