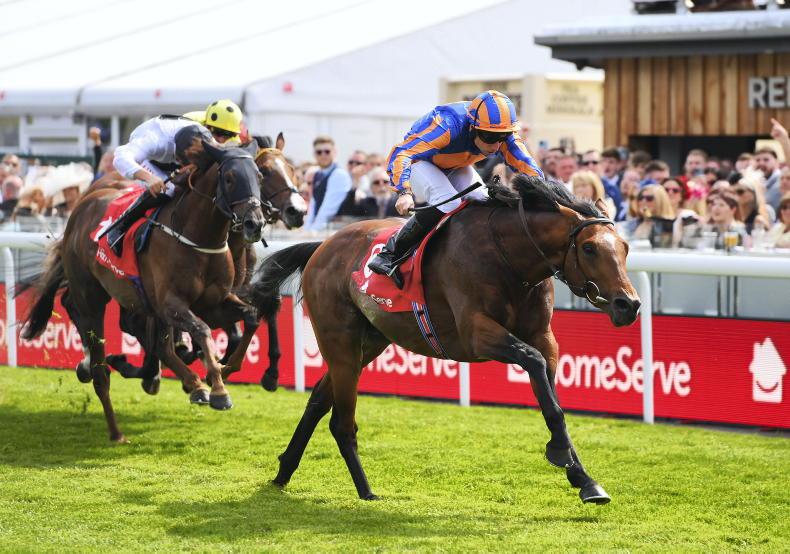 THE Ormonde Stakes went to the father/son combination of Brian and William Haggas, with Hamish (Tom Marquand) carrying the familiar white with red braces of Haggas senior to victory at an SP of 9/2.

The six-year-old homebred has raced just once on turf in each of the last two seasons due to training difficulties, but he has lost none of his ability based on a comfortable three-quarter-length defeat of the front-running Thunderous (Mark & Charlie Johnston/Joe Fanning) in the Group 3 feature.

Hamish was conceding weight all round, and looked to have more in hand than the bare margin as he was produced in the straight to overhaul the long-time leader, who in turn was a comfortable two and three-quarter lengths clear of third-placed Alounak (Andrew Balding/David Probert).

Odds-on favourite Albaflora held every chance early in the straight, but weakened late as if the run was needed, in contrast to expectations.

Hamish has entries in the Yorkshire Cup and Hardwicke Stakes, but the former comes too soon and his chance of lining up in the latter depend on the ground, with any sign of the word ‘firm’ in the description ruling him out.

Despite winning the September Stakes at Kempton last year, he looks a better horse on easy turf, and his patient connections will wait until conditions are right before running him again.

Star Of India benefited from a marked step up in trip to outbattle his Listed Dee Stakes rivals on Thursday, thereby adding another arrow to Aidan O’Brien’s Derby bow.

The 6/4 favourite was providing his trainer with a ninth victory in the Dee Stakes, and his third winner from as many runners at the track’s May meeting, all ridden by Ryan Moore.

Star Of India was only fifth in the Craven Stakes at Newmarket on his return having won on his sole two-year-old outing at Leopardstown, but he seemed much better suited by the extended 10-furlong trip here and stayed on strongly to score by two and a half lengths from Martyn Meade’s Cresta (Tom Marquand).

Unlike Moore’s winners on Wednesday, Star Of India missed a beat at the stalls, and had to be pushed along to hold a handy position behind early leader Mr McCann, who battled with Dubai Poet until the pair began to weaken at the furlong marker.

At that point, Star Of India was produced to lead, and he looked in no danger once taking over, with Cresta and Sonny Liston both keeping on from further back to fill the places. Neither of that pair had the clearest of runs but couldn’t be called unlucky as such.

“I wouldn’t compare him with yesterday’s winner as they are slightly different horses. Yesterday’s was very impressive, but the way this race was run meant he couldn’t be impressive.

“He’s a nice horse and it was only his third run, so that was a good performance. He’s still learning, and things were happening a little quick for him in places, but he got it done well in the end. I think he’ll improve as he’s a very laid-back horse.

“We’re only just getting to know about him. When he came off the bridle, I think that was more through greenness than anything else. It was a big learning curve today. He’s in the mix with the others and he’ll get better, I’ve no doubt about that.”

Moore gave the impression, without the need for words, that Guineas third Luxembourg was a class above both, but news filtered through on Friday morning that the Derby favourite had returned lame after a gallop that morning, and his participation at Epsom must be in some doubt.

Rest of the card

To add to their excellent record at the track this week, Aidan O’Brien and Ryan Moore concluded the day by taking the Roofing Consultants Group Handicap with 9/4 favourite Temple Of Artemis, making it a remarkable four winners from just four runners at the meeting for the Master of Ballydoyle.