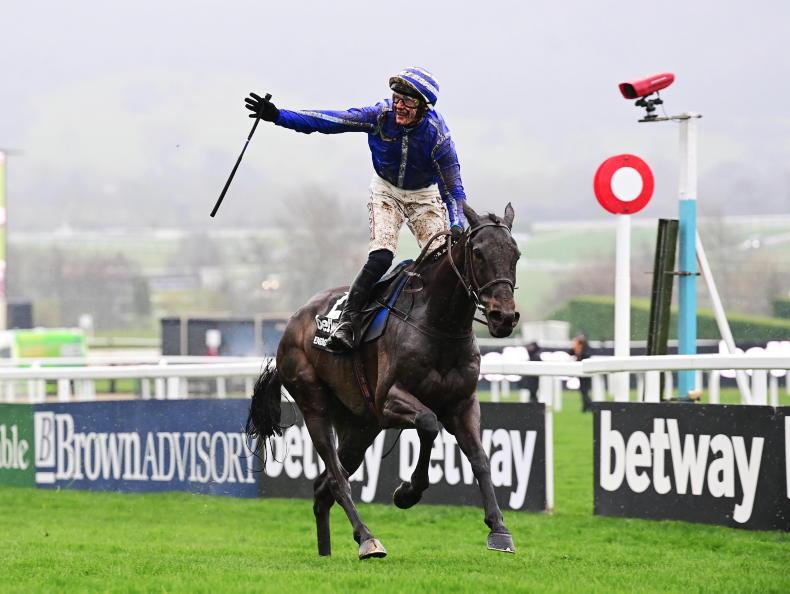 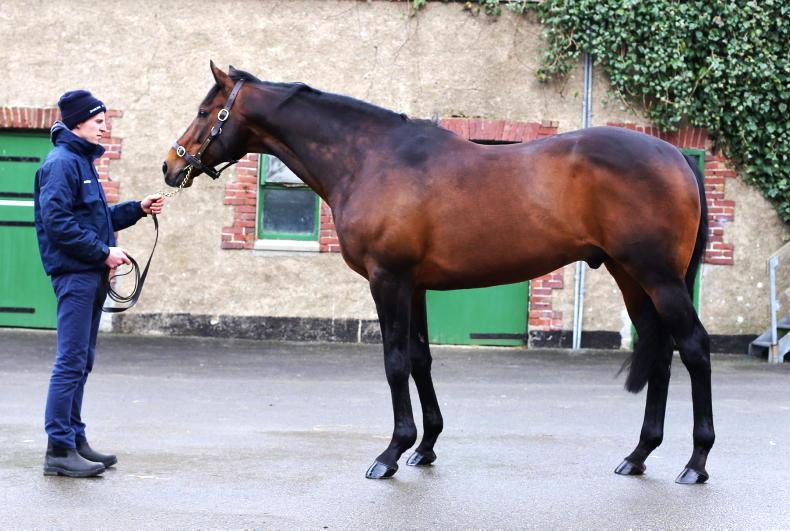 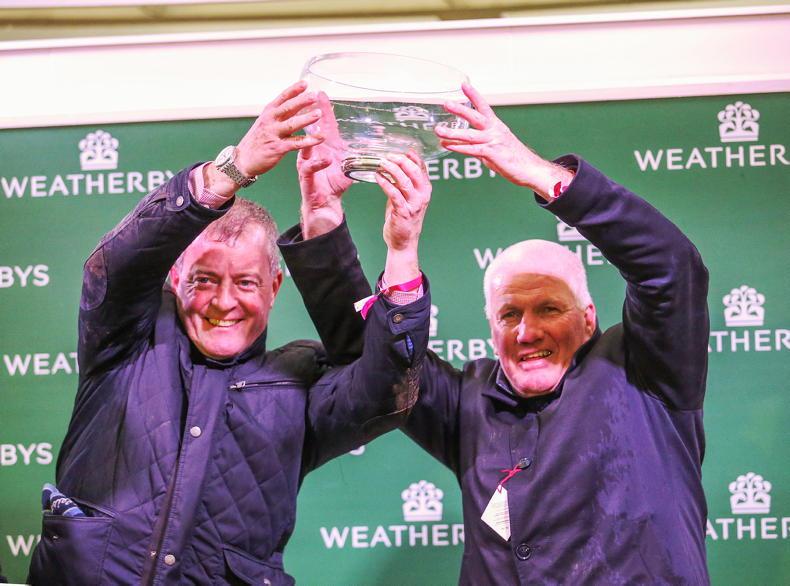 Ger O'Brien and Sean Deane, owners and breeders of Facile Vega, with the trophy for the Grade 1 Weatherbys Champion Bumper \ carolinenorris.ie
Previous Next

WHILE Willie Mullins will rightly get full credit for his first victory in the Grade 1 Queen Mother Champion Chase, it was the French breeding world that celebrated this great win just as much, and the success once again showcased the importance and value of French stallions.

The eight-year-old Energumene is a non-thoroughbred son of Denham Red (Pampabird), the sire of another great Cheltenham star in Un De Sceaux. This was a third Grade 1 success for Energumene, previously successful in both the Arkle Chase at Leopardstown and the Colliers Novice Chase at the Punchestown Festival.

Incredibly, the Cheltenham hero is the only blacktype earner of any sort in the first four generations of his family. Bought for €50,000 from Moanmore Stables at the Tattersalls Ireland Derby Sale by Tom Lacey, he was saddled by Sophie Lacey to win his only start in a point-to-point in England.

Bred by trainer Christophe Dubourg, Energumene is one of a pair of winners from the April Night (Kaldoun) mare Olinight who won twice over jumps in France, taking until the age of six to do so and racing 21 times.

Energumene’s full-sister Dolinight (Denham Red) won twice last year in France at the age of eight and is now at stud. Their sire was a talented hurdler, winning a couple of listed races at the age of three. He died the same year that Energumene was born. Both Un De Sceaux and this week’s Champion Chase winner are out of mares by April Night.

DIAMOND Boy has been busy in the four seasons since he moved to Con O’Keeffe’s Kilbarry Lodge Stud, and this could be his busiest season yet, thanks to siring the Grade 1 Brown Advisory Novices’ Chase winner L’Homme Presse.

L’Homme Presse is the best runner for three generations in his family, and this particular branch has been light on winners. His third dam Al Ahaqrah (Sir Ivor) bred three minor winners, one of which was the Cheltenham Grade 1 winner’s grandam Femme Rouge (Elmaamul). She sold as a yearling for just IR1000gns, but went on to win 12 races and £40,000 in Italy.

Two of Romance Turgot’s wins were at Cagnes-Sur-Mer, while on her sole win at Auteuil she was ridden to success by Philip Carberry.

THE much lamented Jeremy (Danehill Dancer) was the first stallion to sire a second winner at this year’s Cheltenham Festival, Sir Gerhard joining Corach Rambler on that list.

This was a second Festival win for the seven-year-old Sir Gerhard, as last year he won the Grade 1 Weatherbys Champion Bumper on the corresponding day. In between, he also annexed the Grade 1 Brave Inca Novice Hurdle at Leopardstown. Keatingstown Bloodstock is the named breeder of Sir Gerhard, a trading name for the late Jonathan Fitzpatrick.

Sir Gerhard is certainly justifying the £400,000 spent on him at the 2019 Tattersalls Cheltenham December Sale after he won his only point-to-point start for Ellmarie Holden. He was sold as a foal at Goffs to Peter Molony’s Rathmore Stud for €17,000 and returned a profit when returning to the Land Rover Sale and making €72,000.

He is the first foal and one of two winners from Faanan Aldaar (Authorized). She was placed before selling at Goffs for €17,000. Racing for Joe Fitzpatrick, she was again placed many times before getting her head in front in a maiden hurdle at Roscommon.

Faanan Aldaar is one of nine winners from the Group 3 winner Ya Hajar (Lycius). The best of the others is Prince Of All (Iffraaj), winner of the Listed Patton Stakes at Dundalk eight years ago. Ya Hajar is one of 10 successful progeny out of the German two-year-old listed winner Shy Lady (Kaldoun), and one of them stood head and shoulders above the others. Zafeen (Zafonic) was runner-up to Refuse To Bend in the 2000 Guineas before heading to Royal Ascot and capturing the Group 1 St James’s Palace Stakes.

A monster of a horse

THERE is no hiding my admiration for the Grade 1 Weatherbys Champion Bumper winner Facile Vega, and as good as his performance was on a rain-sodden track on Wednesday, it is safe to say the best is yet to come.

He is unbeaten in three starts, also winning the Grade 2 Goffs Future Stars INH Flat Race at Leopardstown, and has already banked £100,000 for his owner/breeders, the Hammer and Trowel Syndicate. He is bred to be as good as he is.

A son of Walk In The Park (Montjeu), Facile Vega is the second foal, runner and winner for Quevega (Robin Des Champs), and what a racemare she was for the Hammer and Trowel Syndicate, Ger O’Brien and Sean Deane. She was such a standing dish at Cheltenham that she is immortalised with a venue named after her.

Quevega was a three-time winner in France before her purchase to race from Willie Mullins’ yard. From there she added 13 wins over hurdles from just 18 starts. She won the Grade 1 Ladbroke World Series Tipperkevin Hurdle at Punchestown on four occasions (and was runner-up once), and she landed the Grade 2 David Nicholson Mares’ Hurdle at the Cheltenham Festival a record six times.

Quevega’s first foal Princess Vega (Beat Hollow) raced for the Hammer and Trowel Syndicate and made a winning bumper debut at Tramore. She was covered for the first time last spring by Order Of St George (Galileo). O’Brien and Deane can look forward with growing expectation to a four-year-old own-sister to Facile Vega, a three-year-old daughter of Camelot (Montjeu), a two-year-old filly by Australia (Galileo) and a recently foaled full-brother to the Cheltenham hero.

COMMANDER Of Fleet had the distinction of being the first Grade 1 winner for five-time Group 1 winner Fame And Glory (Montjeu) when he won the Lacy Solicitors Golden Cygnet Novice Hurdle at Leopardstown in the presence of his breeder Patricia Coghlan.

Sold as a foal at Tattersalls Ireland for €35,000 to Mount Eaton Stud before being turned over for a modest profit when selling to Mags O’Toole for €47,000 at the Goffs Land Rover Sale, he started his racing career at Moig South and won his only start between the flags. Now his sixth racecourse success was achieved in the Grade 3 Coral Cup Hurdle.

Commander Of Fleet is one of a pair of track winners for Coonagh Cross, also dam of a point-to-point winner. Coonagh Cross (Saddlers’ Hall) was also bred by Patricia Coghlan and raced for her, winning a bumper at Limerick. She is a sibling to four winners, including the Grade 3 Ballybrit Novices’ Chase winner Sunset Lodge (Electric).

Commander Of Fleet is another star to emerge from an outstanding female line. He has the unraced Midnight Oil (Menelek) as his third dam, a position he shares with Grade 1 winners Death Duty (Shantou) and Foxrock (Flemensfirth), Grade 2 winner Beakstown (Stowaway) and Grade 3 winner Minutestomidnight (Vinnie Roe). Midnight Oil is grandam of Cheltenham Grade 1 winning chaser One Knight (Roselier).

DELTA Work, a nine-year-old son of Network (Monsun) and the placed Robbe (Video Rock) denied Tiger Roll a victorious finale to his career when he landed the three and three-quarter mile Glenfarclas Chase, adding to a previous Festival win in the Grade 3 Pertemps Final.

Bred by Charles and Jean-François Magnien, Delta Work is a five-time Grade 1 winner, so he had all the class necessary to land this cross-country marathon. We are familiar with the big race winners sired by the German-bred, Group 2 winner Network, and he is best known for Sprinter Sacre.

Delta Work is one of five winners for Robbe, the others including Grade A Leinster National winner Cap York (Ballingarry) and the Grade 2-placed Elwood (Martaline).

Back in the limelight

GLOBAL Citizen, a winner of his only point-to-point for handler Willie Murphy of Ballycurragh Stud, topped the Tattersalls Ireland Cheltenham April Sale in 2017, selling for £275,000 to Matt Coleman. He has gone on to win seven times, including two Grade 2 hurdle races and a Grade 2 and Grade 3 chase. The latter is this week’s Johnny Henderson Grand Annual Chase.

Bred by Martin Byrne, Global Citizen, a son of Group 2 winner Alkaadhem (Green Desert), and his full-brother A Hare Breath (Alkaadhem), are two of the four blacktype winners sired by the Ballycurragh Stud stallion.

A Hare Breath and Global Citizen are among four winners from the placed Lady Willmurt (Mandalus), the others include De Plotting Shed (Beneficial) who was Grade 2-placed a few times. 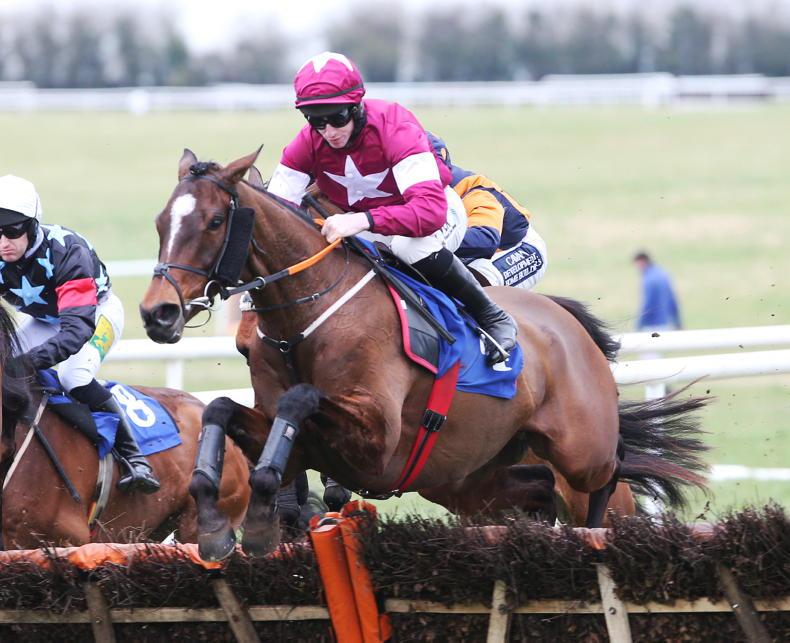 Irish Field Contributor
CHELTENHAM WEDNESDAY: Commander of Fleet takes charge
Gordon Elliott got off the mark for the Festival with a shock 50/1 winner 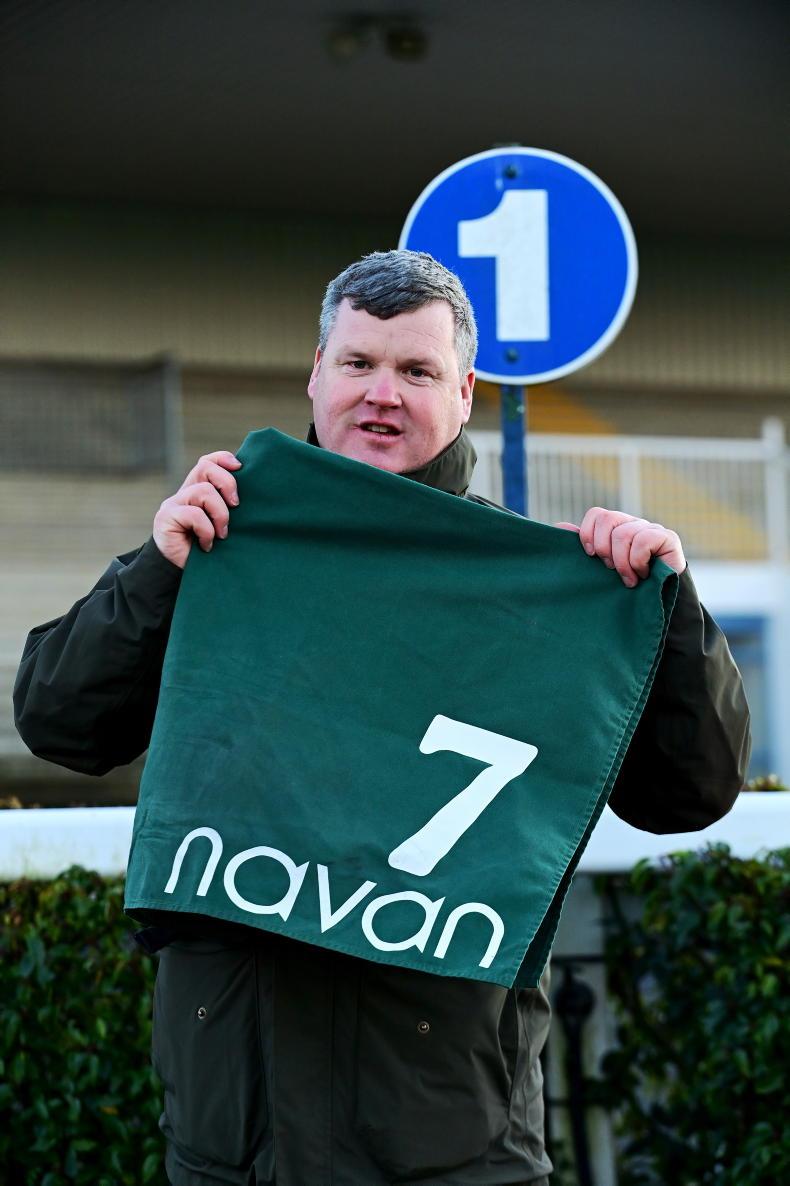 Ryan McElligott
NAVAN SATURDAY: Elliott's unique magnificent seven
Gordon Elliott and his team made history as he became the first trainer in Ireland or Britain to win seven races on the same day at the same track