Title: BARGAIN OF THE WEEK: Grade 2 winner for a pittance

Leo Powell follows the growing success being enjoyed by Wakanaka, now in Canada and the USA 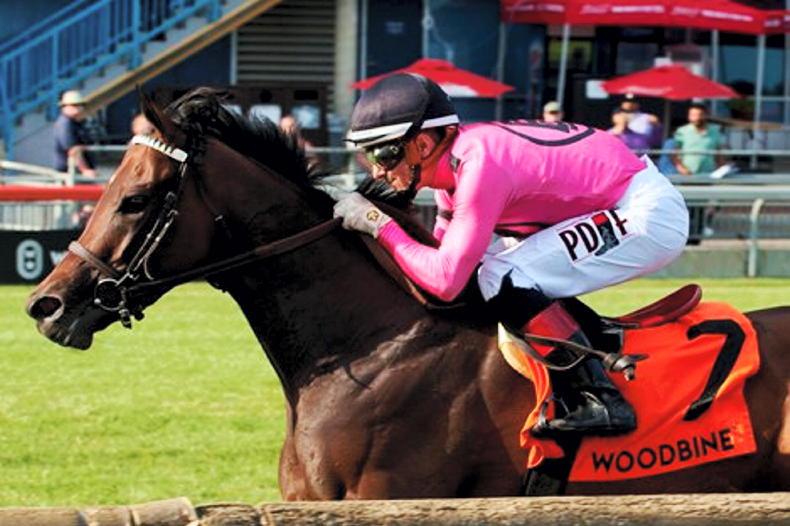 Wakanaka on her way to a Grade 2 success at Woodbine

THE word wakanaka means ‘you are handsome or beautiful’ and is of Zimbabwean origin.

Wakanaka is also the name of a four-year-old Irish-bred daughter of Power (Oasis Dream), and at the weekend she added the Grade 2 Dance Smartly Stakes at Woodbine in Canada to last year’s classic victory in the Group 3 Premio Regina Elena-Italian 1000 Guineas. Now winner of seven races, three more of these were gained at listed level, while the highlight of her placed efforts was to run second in the Grade 1 Just A Game Stakes at Belmont.

Trained by Bill Mott, Wakanaka is owned by Team Valor International and Gary Barber and her victory came at the expense of Fev Rover, that daughter of Gutaifan racing for Tracy Farmer who paid 695,000gns for her at the December Sale last year. Wakanaka improved her record to seven wins, four runner-up finishes and a third-place finish from 13 starts, and took her earnings to more than $450,000.

Bred by Jean Brennan, Wakanaka is out of the Kodiac (Danehill) mare Storyline who has had her first three foals to race, and the others, including her two-year-old filly named Storyinthesand (Footstepsinthesand), have been placed. This year Storyline foaled a filly, her fourth, by Advertise (Showcasing). Wakanaka was sold for just £3,500 to trainer Diego Dettori from the Tullerboy Farm consignment at the 2019 Goffs UK Silver Yearling Sale. What a bargain she has been.

Jean Brennan spent 3,500gns to acquire Storyline as a winning three-year-old, and that mare was very well bought. She is one of a pair of winners from Petite Histoire (Desert Story), and she herself was a smart juvenile when trained by Kevin Prendergast for Lady O’Reilly. In fact, Petite Histoire only raced at two, starting 10 times, and on her debut she was runner-up to Statue Of Liberty. She earned some deserved blacktype when in the frame in the Listed Marble Hill Stakes.

Every second generation of this line seems to throw up a good horse or two. Wakanaka’s third dam Danccini (Dancing Dissident) won at two and her six winners are headed by another who was best at that age, Whitbarrow (Royal Abjar) numbering the Group 3 Molecomb Stakes among his 13 career victories. Danccini’s daughters also include Hawk Eyed Lady (Hawk Wing), and she bred the multiple US stakes winner and Grade 1 American Oaks third, Lady Valeur (Multiplex).