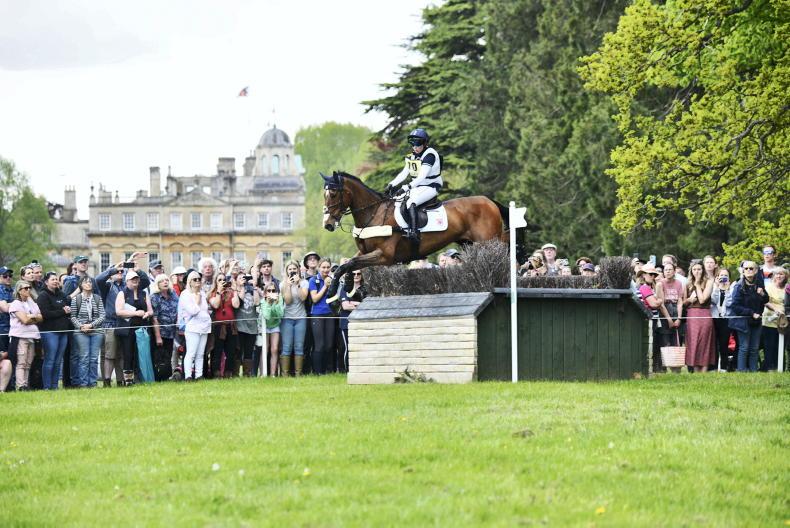 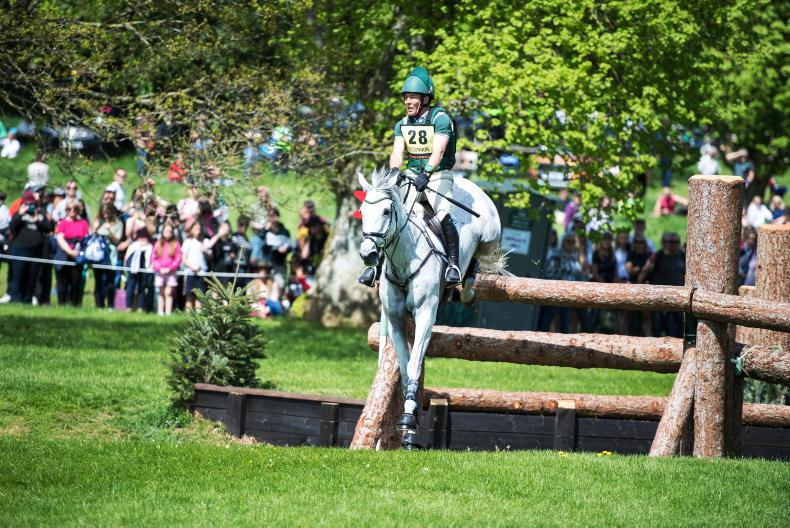 A ROLLER-coaster of drama and emotions ended in spectacular style at Badminton House last Sunday afternoon when Laura Collett set a new finishing record at the five-star event with her Olympic gold medal-winning horse London 52.

The pair came into the event among the favourites to lift the world famous trophy and they led from the start when storming into the lead on Friday with a 21.0 dressage score. Across the Eric Winter-designed cross-country course which caused carnage, Collett was one of six clears inside the time and went into the show jumping phase with a fence in hand.

However, she didn’t need it as the amazing Landos-sired London 52 gave it his all, finishing just over the time allowed to add 0.4 time penalties and finish on 21.4, a new record low score for the venue. “I have no words – that horse is amazing,” a very emotional Laura said after winning on the 13-year-old gelding who is owned by Keith Scott, Karen Bartlett and Laura. “He jumped his socks off – I couldn’t see a distance anywhere and he just went higher and higher and I’m just so lucky.

It hasn’t been an easy road to the top level for Laura, who has no sight in her right eye following a serious accident in 2013 which left her in a coma. She knows it was hard for her mother, Tracey, who is her biggest supporter and Laura heaped the credit on her.

“My mum is from New Zealand and it is Mother’s Day there so this is for her. Mum has put up with a lot over the years. First of all when I decided I wanted to go eventing, she tried to make me go show jumping because it was much safer. Then she went through hell when I had my accident and she never once faltered in supporting me,” added 32-year-old, who won her first five-star at Pau in 2020 with London 52 and Olympic team gold last summer in Tokyo.

Reigning world champion Ros Canter finished in the runner-up position with the 10-year-old Lordships Graffalo; they were the only combination to finish on their dressage score (26.0). They rose to fourth after a clear cross-country round and were among only four clears inside the time in the final jumping phase.

“I never would have dreamed of this result, we didn’t even know if he was ready, so to finish second is unreal. He will have learnt so much in the last few days,” said Canter who also finished 12th with Allstar B.

For the first time since 2002, it was a British one-two-three with Oliver Townend taking third place with the highest-placed Irish Sport Horse, Swallow Springs. The 14-year-old gelding by Chillout was bred by Maria Keating and is owned by Paul and Diama Ridgeon. Formerly campaigned at this level by Andrew Nicholson, Townend took over the ride when the Kiwi stepped back from top level.

They started the competition in joint-sixth place (25.7) and rose to second place with a clear inside the time on cross-country day; they survived a very scary moment at the HorseQuest Quarry at fence 4ABC, where the gelding left a stride out and Andrew almost fell off. They were originally eliminated but he contested the decision and his clear was re-instated. A fence down in show jumping saw them finish on 29.7.

There were four more Irish-bred horses in the top 10: 2019 winner Piggy March and the 17-year-old mare Vanir Kamira (Camiro de Haar Z x Dixi, bred by Kathryn Jackson) finished fourth on 30.1, ahead of Townend and Ballaghmor Class (Courage, Noel Hickey) in fifth on 30.3.

Best of the Irish riders in eighth place was Olympian Austin O’Connor who showed once again what an incredible jumper the Kate Jarvey-bred Colorado Blue (Jaguar Mail x Rock King) is. The 13-year-old gelding, who is owned by O’Connor and the Salty Syndicate, was 58th after dressage; they rose to 13th after a world class round inside the time across the country and another clear in the show jumping on Sunday, with 0.4 for time, saw them finish on a score of 36.3. “I was a little bit disappointed with the dressage, his flying changes just aren’t there and it is expensive at this level. But we parked that and knew the cross-country was going to big and testing. He was very very good in Tokyo and there was a little bit of pressure to come back out and repeat that performance, but I had a lot of confidence in him and he gave me a great ride,” O’Connor commented after the competition.

“He jumped great again today. I’ve got a great team of people at home. They got him in this condition and he’s come out bucking and squealing and he jumped like it was the first day.

“We will take stock now. This was the plan, and a top-10 finish was the wish. We will see whether he goes to Burghley or the World Championships, but first and foremost he will have a good rest.”

On her first attempt at Badminton, 26-year-old Susie Berry finished in 17th place with Helen Canton and Caroline Berry’s 11-year-old John The Bull (Luidam x Houmayoun), bred by James Byrne. They were best of the Irish after dressage (28.8) and had a superb round across the country, adding 12.8 time faults, before four show jumping faults saw them complete on 45.6.

After cross-country, a delighted Berry said: “He felt like it was so within his capabilities. He nearly jumped me off at some of them, he has so much scope. I have to get him there at the right place and he will jump anything for me.”

Padraig McCarthy was the only other Irish rider to complete, and he did so twice, finishing 33rd with Pearl Chaffe’s HHS Noble Call (Heritage Fortunas x Cavalier Royale) on 61.4, and 41st with the German-bred Fallulah (71.3).

Joseph Murphy (Cesar V) withdrew after cross-country, as did Clare Abbott who was 16th after a great round with Jewelent, and Elizabeth Power who was 20th with Soladoun. Cathal Daniels had a fall with Barrichello, while Sarah Ennis was eliminated for jumping a wrong fence.

Among the high profile mishaps was Tom McEwen’s fall with his Olympic gold and silver medallist Toledo de Kerser at the final element of the Lightsource BP Solar Farm. Both horse and rider were okay afterwards.

The 2021 European champions Nicola Wilson and JL Dublin took a heavy fall at the third element of the Mars M Complex and Wilson was taken to hospital. A statement from the family on Sunday read: “Following her fall from JL Dublin at Badminton Horse Trials on Saturday May 7th, Nicola has had a comfortable night in hospital and is conscious in a stable condition awaiting further tests. She is receiving the best possible care from the team at Southmead Hospital. Dubs is in good form and will be making his way back to Yorkshire later today. We will bring you further updates as and when we can.” 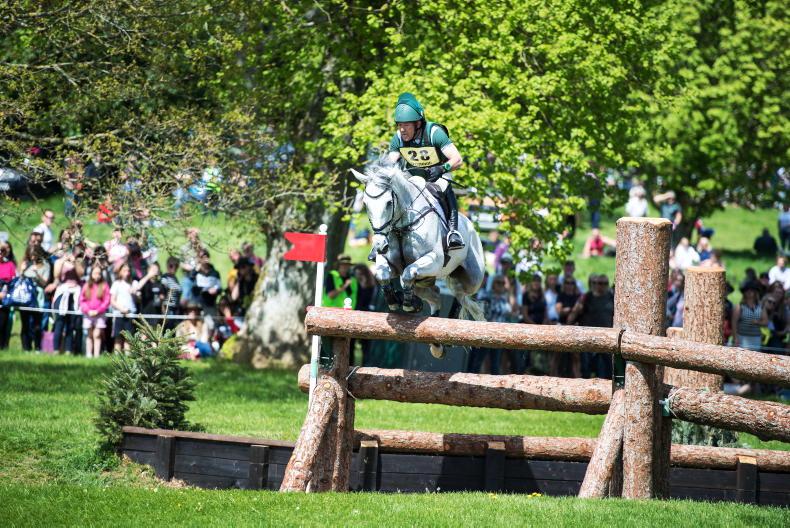 Judith Faherty
FEI WORLD CHAMPIONSHIPS: Who's on the Irish team?
We take a closer look at the Irish eventing team for the FEI Eventing World Championships 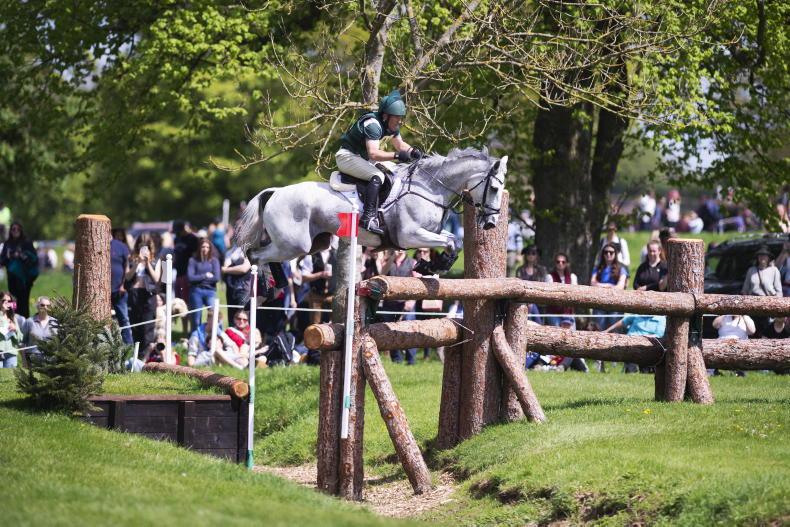 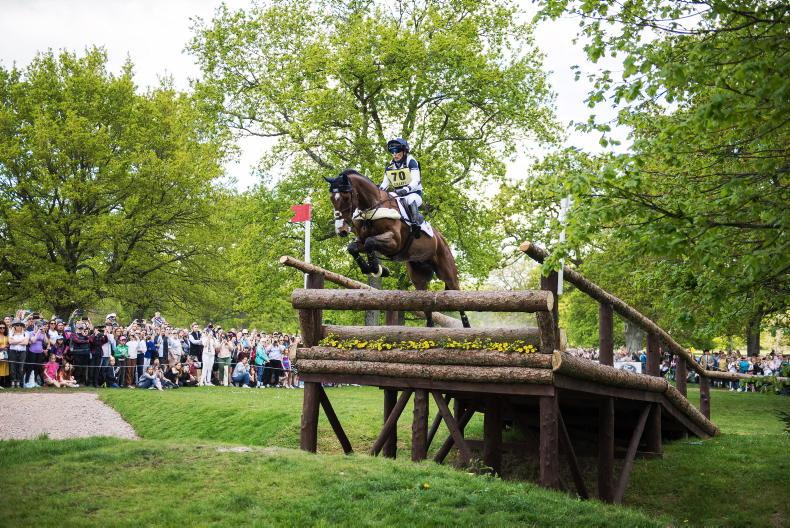 Irish Field Contributor
NEWS: Badminton changes schedule to avoid King's Coronation
The cross-country at the 2023 Badminton Horse Trials will take place on Sunday, with the whole event starting a date later than usual 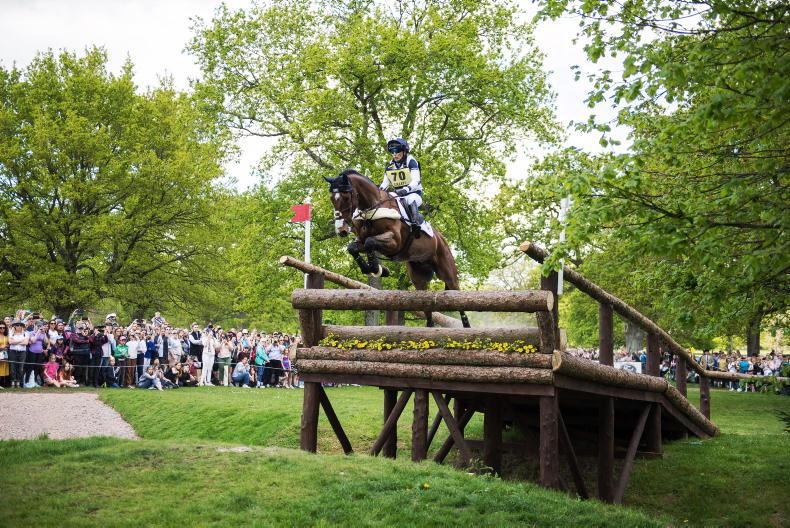