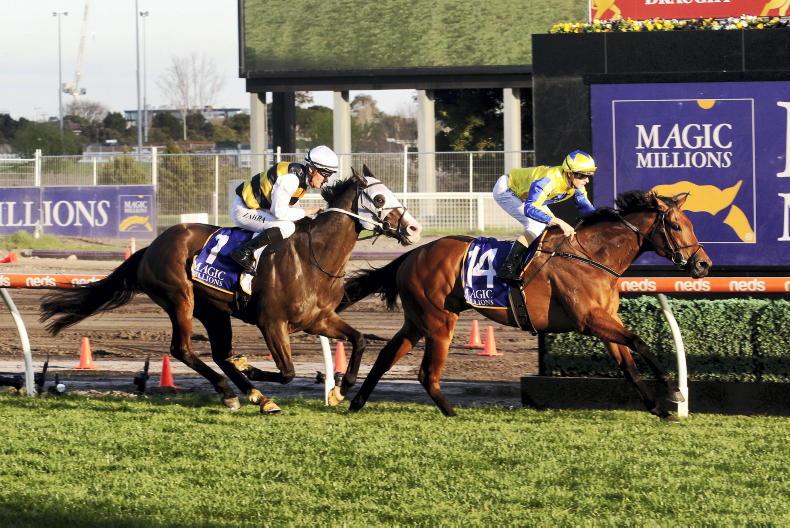 THE Ciaron Maher and David Eustace-trained Snapdancer led around the bend in the A$1 million Group 1 Memsie Stakes, showing her rivals a clean pair of heels to build a winning break.

The six-year-old Choisir mare broke away by four lengths before I’m Thunderstruck and Cascadian charged late to whittle the margin to a half-length.

A Group 1 Sangster Stakes winner over 1,200 metres in May, last Saturday’s 1,400-metre victory, also on soft ground, has her trainers thinking big.

“Maybe The Everest is an option, but she seems to be really dominant at 1,400 metres, she has a high cruising speed. I think she still is developing, so the sky’s the limit,” said Maher.

“If she did nothing else this preparation, this year has been phenomenal for her. She is just going from strength to strength and I think she’ll get better again.”

The win also doubled Ethan Brown’s Group 1 tally, the 23-year-old remarking: “She is taking me on the ride of my life.

“She jumped so well, established a lead and switched off when I asked her to. I thought she was really impressive, she just keeps raising the bar.”

Having been in the care of Paul Nicholls for his third place at Cheltenham, Bell Ex One, purchased for £110,000 from the 2021 Tattersalls Cheltenham December sale by Melbourne Cup-winning owner Sandy McGregor (Prince Of Penzance), was ridden by his trainer Steven Pateman to a three-length win in the $125,000 feature hurdle.

At his first jumps start in Australia, the Excelebration gelding was placed handy to cover any moves, one off the race leader.

With the race a stalemate at the half-way mark, Willie McCarthy on the race-favourite Stern Idol took off around the field, flushing out the challengers with a true tempo.

Pateman moved Bell Ex One into the trail of Stern Idol as the pair drew clear of the remainder of the field.

Hitting the lead at the second last, Bell Ex One was made of sterner stuff as he drew clear after the last to post a three-length win over his fellow Irish-bred contender, with Hosttar filled third placing.

“When he came off the bridle, I found another new set of gears and it feels like ‘wow, what have we got here’,” said Pateman of the feel Bell Ex One gave him.

“His jumping was unreal and the way the race was run was ideal. I’m just so happy for Sandy (McGregor), he puts so much into the game,” he added, noting that McGregor’s company Ecycle Solutions was the major sponsor for the day.

Coincidentally it was also Pateman’s first hurdle win as a trainer, though he nearly didn’t participate in the race after being sensationally dislodged by a fallen horse in the previous one, being catapulted metres into the air from Chains Of Honour.

“I bounced up off the ground because I knew I was on a good one in the next,” he quipped of the mishap.