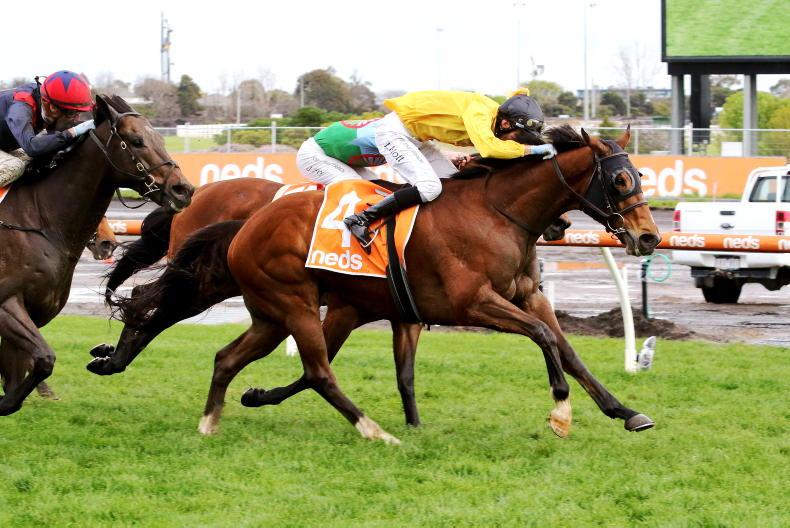 WITH the global popularity of Top Gun Maverick sweeping cinemas, you’d think a horse named Callsign Mav would have been a crowd favourite in the Group 1 Sir Rupert Clarke Stakes at Caulfield last Saturday.

Not so. Sent out a $16 favourite for the 1,400 metre event, the Kiwi-bred Callsign Mav left punters rueing an omen missed as the six-year-old held out the Irish-bred and -owned Footstepsinthesand gelding I Am Superman to provide Jamie Mott with his first Group 1. The Kermadec race favourite Tuvalu had to settle for third, beaten by half a length.

“I always knew it was coming,” said the 34-year-old Mott after his 1,352nd win, a maiden Group 1. I’m one for working hard and always believing in what you are doing. Giving up is not an option.

“I put myself in a good spot weight-wise and mind-wise this campaign and I’m thankful to Danny and the wonderful connections for keeping me on Callsign Mav. They deserve it and the horse does as well.”

Transferred from John Bary in New Zealand where he was a three-time Group 1 winner, to Danny O’Brien’s stables at Flemington this was Callsign Mav’s first win in five Australian starts.

He will now target the Group 1 Toorak Handicap with Mott certain to keep the mount, handicap pending.

“He’s just been such a gifted rider who’s worked so hard over such a long period of time with his weight,” said O’Brien of the 182cm Mott who is married to Irishwoman Carol-Anne Brassil.

“If Jamie was four or 5kgs lighter, he’d be a top-three metropolitan jockey. He rides as well as anyone. There are so many people that have got so much admiration for Jamie.”

ANAMOE’s class needed no underlining but he did it anyway winning his fifth Group 1 in Saturday’s George Main Stakes over the Randwick’s mile.

Dispatching his rivals in the manner all A$1.65 favourites should, the Street Boss colt defeated the Sacred Falls mare Icebath and the Worthy Cause mare Hinged.

“He’s a star,” said McDonald. “He’s so adaptable now. He’s a pleasure to ride and as soon as you hop on, he oozes confidence. You know where you’re going to be. He hops away and goes to sleep.

“He conserves energy like no other horse. He does enough to get past them and he’ll do enough to hold them at bay.”

Anamoe now has a path plotted to the Cox Plate via a start in the 2,000-metre Might And Power Stakes at Caulfield on October 8th, his final lead-in, two weeks out from the Cox Plate.

Anamoe’s fitness though has been brought into question after it was revealed the colt was lame following the George Main.

“He was examined thoroughly before he got onto the float back to Osborne Park,” said trainer James Cummings.

“He was actually vetted three times and a couple of those times he thought he was fine and the third time he gave Mark Van Gestel that assessment that he was lame. The good news was that when he got back to Osborne Park he had improved a lot from that three grades out of five lameness that was determined by the club vet.”

Anamoe remains a $3.50 favourite for the Cox Plate ahead of Zaaki, though as Godolphin general manager Vin Cox highlighted: “We aren’t going to be taking any risks with him, we will see how he is over the next little bit and evaluate from there.”

Nature Strip is back in gear

FIRST time out since winning the King’s Stand Stakes at Royal Ascot, Nature Strip blew his rivals away in Saturday’s A$1 million Shorts at Randwick.

Facing his long-time rival Eduardo in the 1,100 metre Group 2, Nature Strip justified his tight quote of $1.65 by powering past that speedster half-way down the straight to win by over a length as the Vancouver colt Overpass and the Per Incanto gelding Lost And Running nosed out Eduardo to fill the placings.

“I just let him glide through and he did it beautifully,” said James McDonald as Chris Waller highlighted it was all systems go for October’s Everest.

“Today he displayed that he’s got ringcraft now, to just switch off and to do those little things right, and help him be better,” said Waller of the Nicconi eight-year-old.

“He’s doing it the right way, he’s not breaking his own heart. He used to break other horses’ hearts and sometimes his own.

“It’s a good first-up run, he’ll take good improvement from it and be there (in The Everest) in four weeks’ time.”

THE former James Tate-trained Top Ranked has propelled himself to equal second favourite for the Group 1 Epsom Handicap on October 1st after an impressive win in the Group 3 Bill Ritchie Stakes at Randwick on Saturday.

The Irish-bred Dark Angel horse strode through the middle of the seven-horse field to win with ease at his third Australian start.

“There is plenty left in him and that’s very exciting,” said Hugh Bowman of the 2021 Lockinge Stakes third placegetter who was bought by an Australian Bloodstock syndicate last year.

“It was a real test of a race. The jets were on from a long way out and I just rode him to really hit the line and he just started to bring himself into the race from the 600 (metres)

“I think Annabel can aim really high with this horse and he will not let anyone down.”