Title: AROUND THE COUNTRY: Silver View lands the spoils in Louisburgh 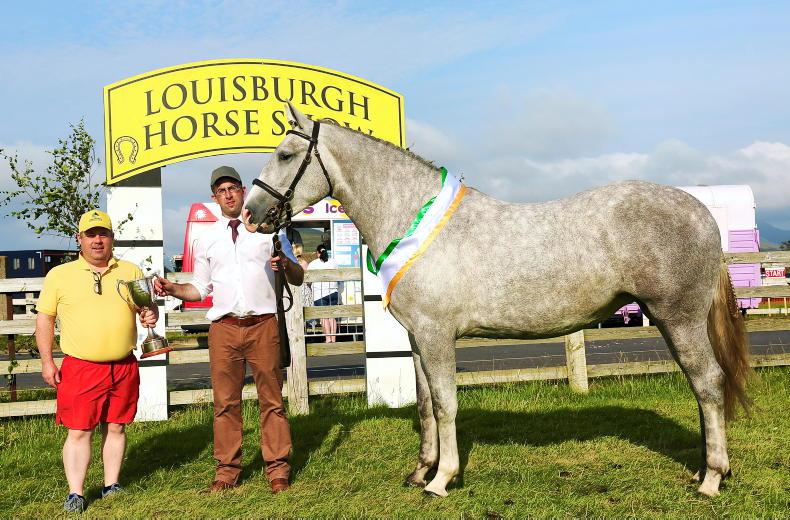 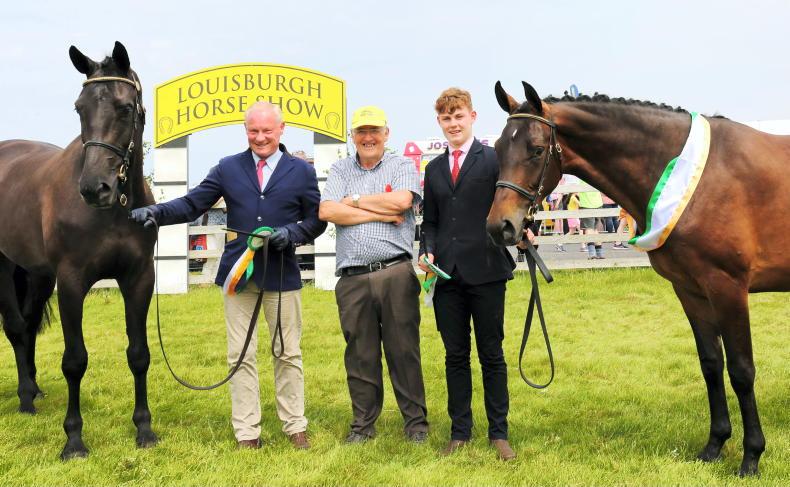 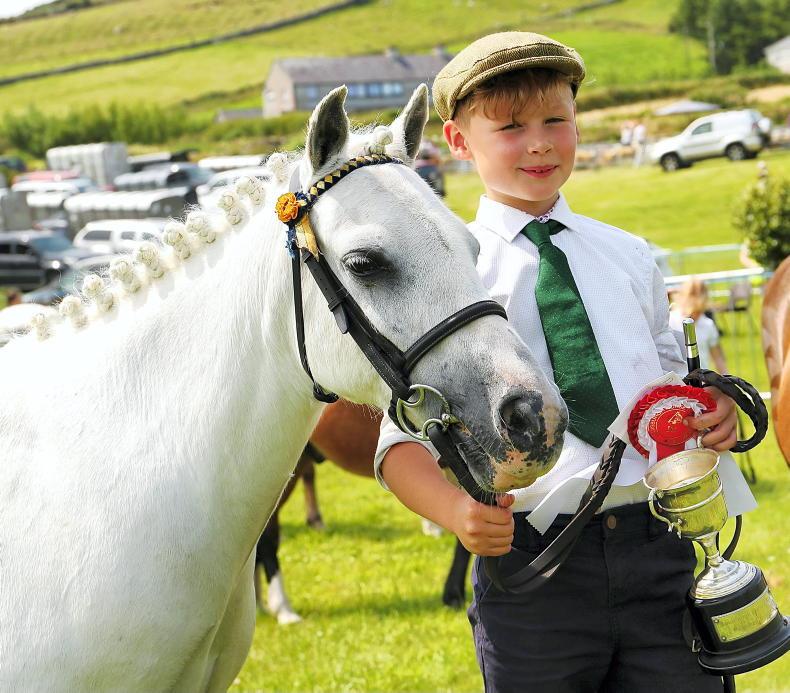 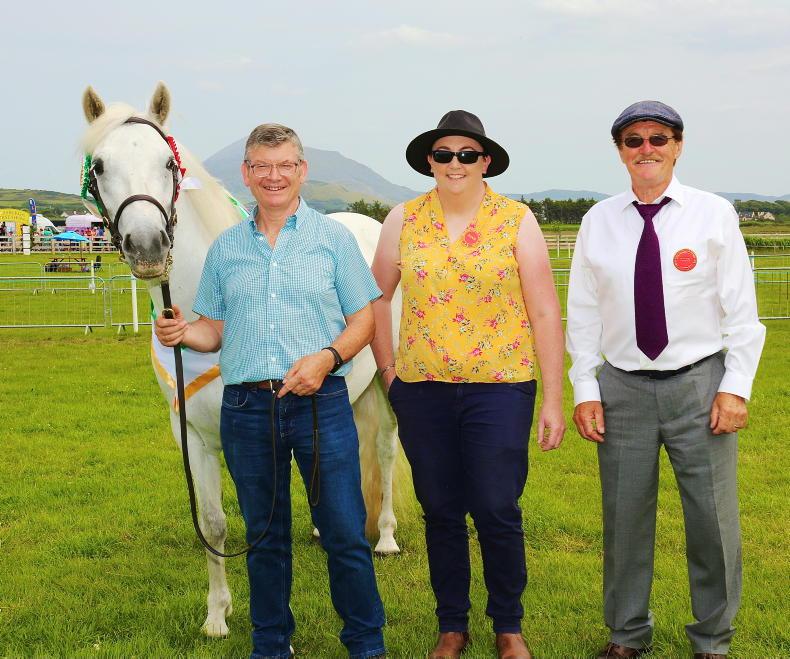 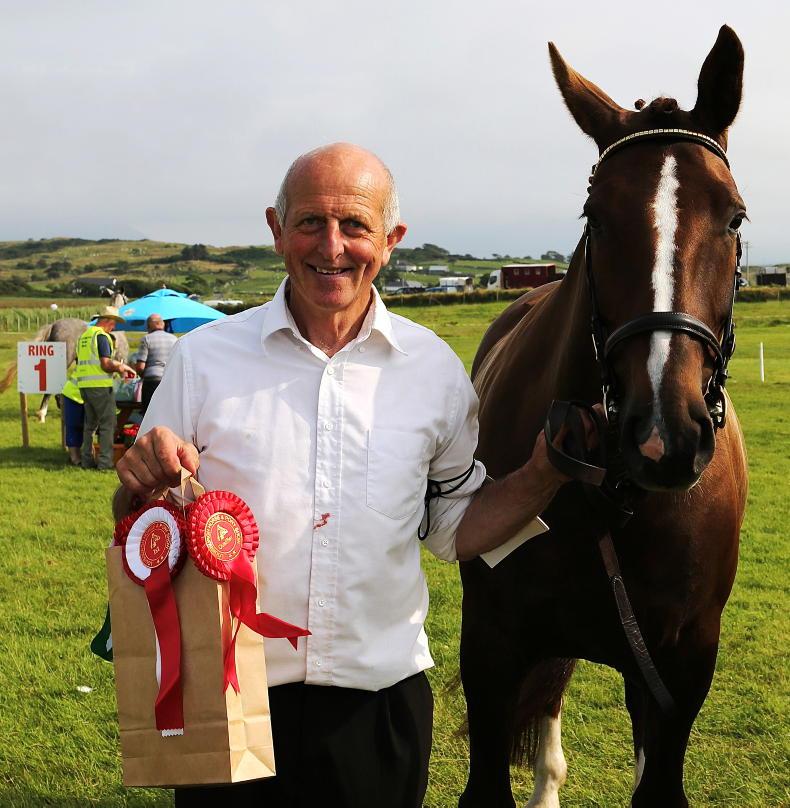 Bagged Up: Davy O’Toole with Willow Rose and Willow Breeze’s collection of rosettes and sashes at Louisburgh Show \ Susan Finnerty
Previous Next

AFTER 2019’s horizontal rain and Wild Atlantic Way gusts of wind on show day, Louisburgh was due a break from the weather gods. Last Sunday, as the country geared up for record-breaking temperatures, the sunshine brought the crowds out to this unique show beside the spectacular Blue Flag beach at Carrowmore.

In fact, local households came to the rescue, offering their gardens and yards for extra parking space for the bumper crowd.

Irish Draughts are the forte of this area and Andrew Gardiner and Timmy Wilson had three excellent feature classes to judge.

First to strike in the Louisburgh Irish Draught mare championship was Bridget Devaney’s fittingly titled Clewbay Countess. Reserve champion in this same class three years ago, she edge up to win and close on her fetlocks was Seamus Sloyan’s three-time Dublin winner Elm View, making her return to the showring.

The Elm Hill liver chesnut’s movement moved her up from sixth place to stand beside Clewbay Countess, the Clew Bay Bouncer grey Sloyan had sold after her win in the young mare class and reserve Draught mare title at Dublin six years ago. Both mares are entered again for Dublin, which is shaping up into an intriguing class.

Third in the Draught mare feature event was Kilcashel Abbey, owned by Seamus Duffy, who recently had a visit from ‘Dallas’ actor Patrick Duffy, as mentioned in last week’s Pony Tales page.

Duffy’s Castana mare and her Kilmovee Lionhawk colt Kilmovee Charlie then leapfrogged to the red rosette position in the following mare and foal combination championship. Taking the reserve slot here was Davy O’Toole with his Cappa Cochise mare Willow Rose.

Her Inisfree The Holy Grail filly Willow Breeze, then won the Louisburgh foal championship class. As the evening went on, local man O’Toole ended up with an armful of qualifying rosettes and sashes, including the reserve Irish Draught championship sash.

This title was won by Clew Bay Countess, bred by another local Tom Burke, following on from her Athenry and Ballina tricolour successes. Although he missed the Draught championship, Sloyan was on standby for the overall championship with his two-year-old Silver View, whose presence and movement saw her edge off the challenge on a still-scorching Sunday evening of Clew Bay Baroness for the overall title.

By Fast Silver out of Elm View, Sunday’s champion is a full-sister to the dam of King Elvis I, Sloyan’s Class 1 stallion at Cavan back in March.

There was another unique family double, of the human kind this time, when Tiernan and Alex Gill won the earlier championship with their youngsters Flogas Penelope and Flogas Oilily.

Louisburgh is another must-go-to for Tiernan Gill and where he won his first ever rosette. “It was in the leadrein class, judged by George O’Malley Snr. He said I was properly turned out, then turned to my father [Tiernan Snr], who was wearing wellington boots, as it was a wet day, and said ‘But you’re a disgrace!”

Alex, the third generation of Gills to win at Louisburgh, opted to lead the two-year-old Penelope, by Jardonnay VDL, in the championship with Tiernan showing his Westport young horse champion, the Dutch-bred Oilily. That proved to be the right choice. Both pony rings were finished by 2.30pm, par for the course this summer. Roger and Laura Brady’s Vinura Ella, by Glencarrig Knight, already a winner at Westport and champion the previous Sunday at Ballina, was Caroline Lydon and Robbie Fallon’s champion choice.

The clash with Ballyconneely affected Connemara entries but again, it was a quality selection for the pair to select their reserve champion from: Roisin and Padraic Gannon’s Glencovitt April.

By Canal Fred, she is a former winner of the All Ireland three-year-old filly final at Ballinasloe (2017) and her Bradson Johnny filly foal was also in the red ribbons with Jonathan Wall’s Rogaire na Locha colt winning the other foal class.

It was another Connemara that won the championship in the adjoining ring where Pascal Crawford had the usual delightful mix of in-hand, young handlers and fancy dress classes to judge. His champion was Mikayala Costello’s Rosedale Frankie, reserve champion at Granard the previous day. Bought from Bartley Conroy in Roundstone, the Class 1 stallion, by Drumbad Fletcher Moss, recovered from a field accident as a youngster and will be on view in the upcoming Connemara stallion parade at Dublin.

Reserve was Declan Igoe’s Ruby that went on to win the championship in the Welsh pony classes, ahead of Copper, owned by another loyal Louisburgh exhibitor Deirdre Coyne.

There really is no other place like Louisburgh for a horse show with its backdrop of Croagh Patrick, Achill Island across the bay and Clare Island offshore.

And the good news is the Carrowniskey Races, held on yet another nearby beach, also makes a return this year on August 13th.

The only disappointment last Sunday for Timmy Wilson was his home county Kilkenny’s loss in the All Ireland hurling final. Otherwise, he summed it up well, saying: “It was a great day in Louisburgh with a lot of classes and the Draught classes were well supported. It’s a beautiful place, lovely show and great to catch up with everyone. A very enjoyable day.” Bagged Up: Davy O’Toole with Willow Rose and Willow Breeze’s collection of rosettes and sashes at Louisburgh Show \ Susan Finnerty 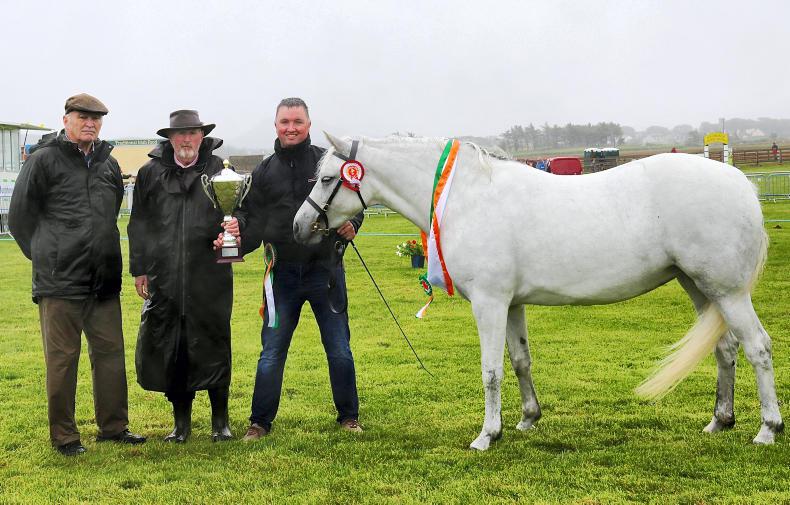 AROUND THE COUNTRY: A feast of Irish Draughts
Despite being hit by bad weather, there were some quality Irish Draughts on show at Louisburgh 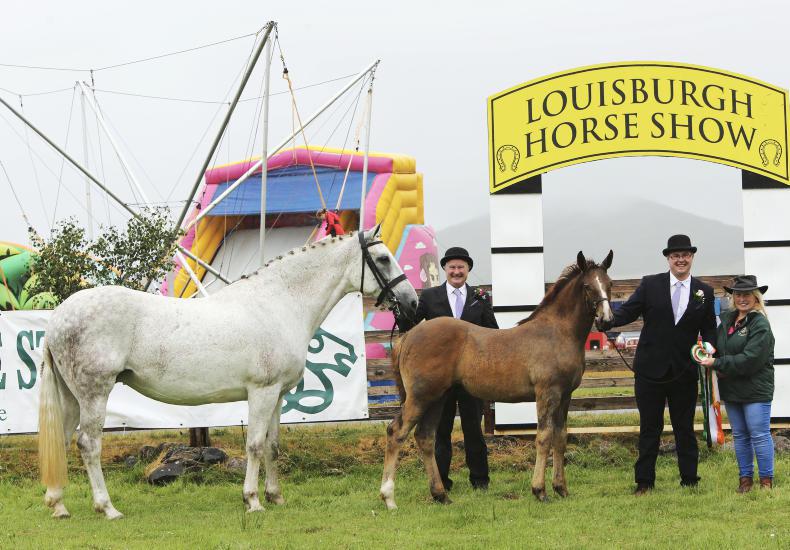 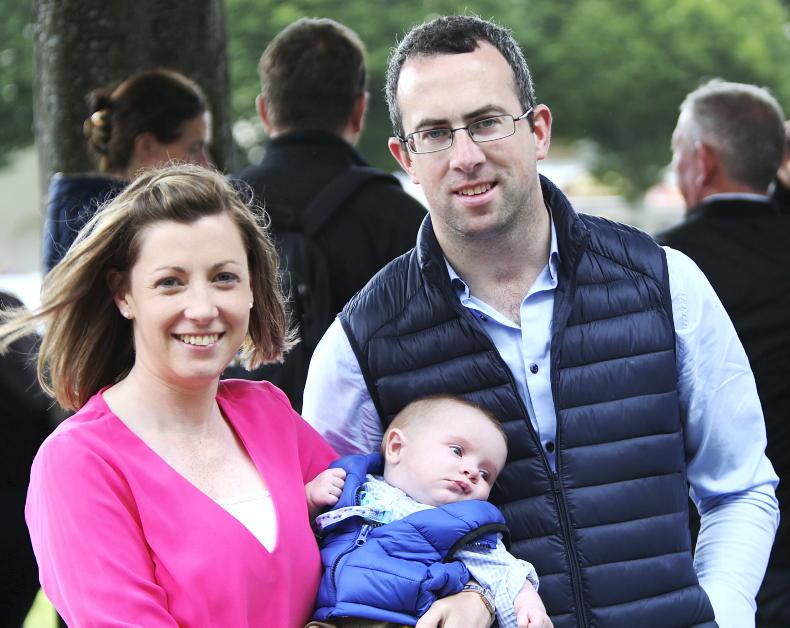 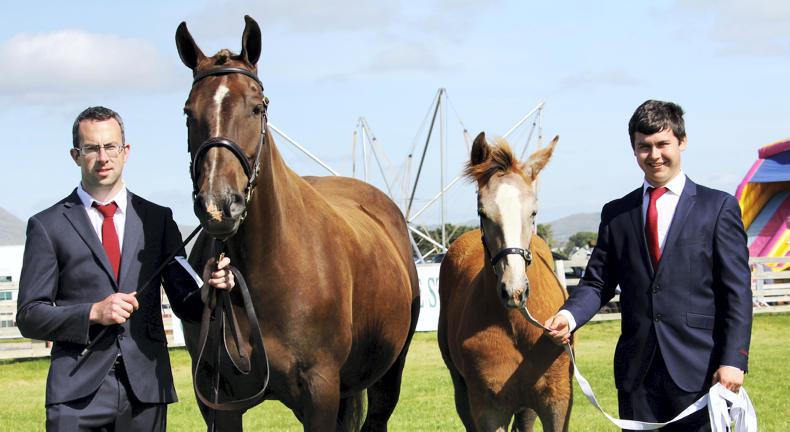