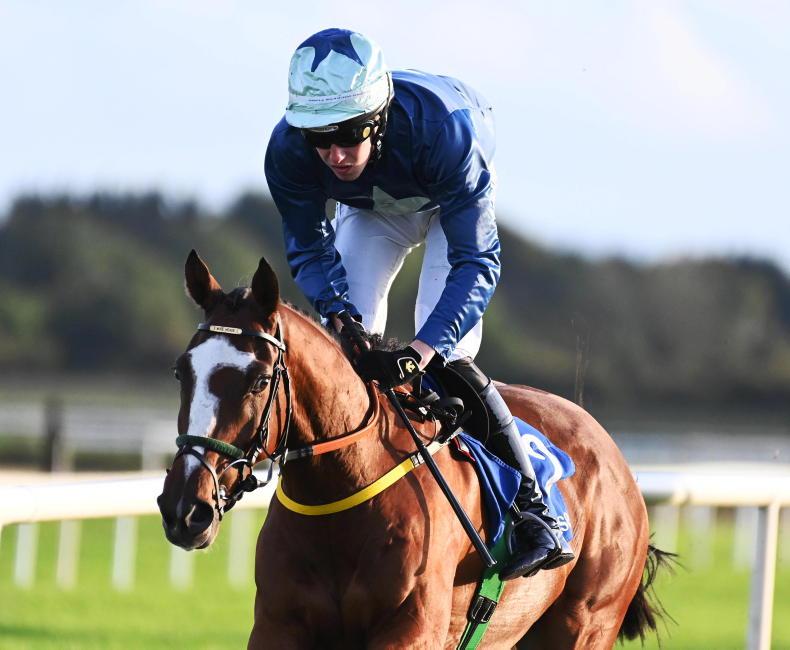 THE stewards reversed a result at Punchestown on Tuesday, awarding a maiden hurdle to the Noel Meade-trained Nucky Johnson and demoting first-past-the-post The Big Doyen, trained by Peter Fahey.

The Big Doyen crossed the line a short head in front of Nucky Johnson but placings were revised when the stewards adjudged The Big Doyen guilty of causing interference close home.

Will The Big Doyen keep the spoils at @punchestownrace?

He won by a short head from Nucky Johnson and Angus McNae reckon the stewards have got a tough job on their hands. @WilliamHill pic.twitter.com/1rvj9fh4sP

In the other division of the two-mile maiden hurdle, French import Intranet made a winning debut for J.P. McManus and Willie Mullins when battling back to beat Belle The Lioness.

Sent off the 11/8 favourite, Mark Walsh’s mount was headed between the last two flights by Henry de Bromhead’s Belle The Lioness, but ended up pulling away to win by a comfortable two and a half lengths.

“He was very professional and Mark said he jumped great. He said he needed a good leap at the last and that was a big help,” said Frank Berry, the owner’s racing manager. “You’d be very pleased with him. We’ll see what Willie wants to do with him down the road.

“He’ll learn a little bit from today as well, as it was his first run for a long time. He handles that ground and we couldn’t be happier with him.”

It was the first leg of a double for Mullins who has took the conditions hurdle with 5/4 favourite Tax For Max.

A commanding performance from Tax For Max under the guidance of @PTownend, with the five-year-old breezing to success in the @WilliamHill Epic Value Hurdle to complete a quickfire double for trainer @WillieMullinsNH ?? pic.twitter.com/GZQN06wfID

His task was made easier by Gordon Elliott’s Hiaou taking an early hold and then almost running out before not surprisingly fading in the straight.

Paul Townend was aboard the winner and said: “That was a good find. His best form is actually around here. The tongue-tie probably helped him and it’s not winter ground or anything out there, he’s not big. He deserved that because he runs well, but he’s just been frustrating probably.

“He’s relaxed a lot compared to what he was like. I remember the first day I rode him in Fairyhouse, it was an experience for both of us. He’s settled down a bit and he even ran in a rubber bit today with nothing on him. From trying to settle him, he maybe got too settled.”

Henry de Bromhead and Rachael Blackmore were on the mark in the opening novice chase with Marvel De Cerisy, a faller behind Impervious last time out.

Marvel De Cerisy (4/1 jt-fav) fell at the final fence on his chasing debut last month but the 5-y-o makes no mistake this time at @punchestownrace for the @HenrydeBromhead and @rachaelblackmor combination. pic.twitter.com/LDCy6GWM5N

“We’re delighted with that. We wanted to see if a step up in trip would suit him, which it obviously did,” said de Bromhead. “He was good, obviously the race fell apart a bit but we were still happy to see him come out and win. I’m delighted for Caolan (Woods, owner). It’s nice to see him come back to form. We’ll look at our options now and see what’s coming up.”

Paul Nolan has a nice prospect on his hands in Sandor Clegane (15/8) who dominated the Connolly’s Red Mills Irish EBF Auction Maiden Hurdle to win by 12 lengths.

Paul Nolan says he is a "proper horse" and will be aimed at the Albert Bartlett Novices Hurdle at Cheltenham.pic.twitter.com/DeXR0kLWyv

“Sean (O’Keeffe) said he felt like a proper horse and said three out he just came alive,” said Nolan. “He said ‘it’s going to take a good one to beat me’ and when he heard a horse coming behind him he just quickened up.

“Over a trip he can do that and he needs that trip. It doesn’t happen very often, unless maybe at Limerick, but we actually think he’ll handle real heavy ground every bit the same as that and that would put others out of their comfort zone.

“It’s nice to get back with some of the good ones. We’ll aim for the Albert Bartlett, we might as well aim high.”