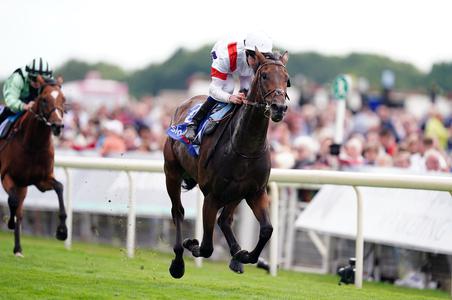 Deauville Legend could go for the Melbourne Cup after putting up a very smart performance to win the Sky Bet Great Voltigeur Stakes at York on Wednesday.

It was stablemate and eventual third El Bodegon who looked likely to claim the spoils, hitting the front two furlongs out in the hands of Hollie Doyle, but Daniel Muscutt was tracking nicely and it was simply a case of when and not if for the talented gelding.

The ultra-consistent son of Sea The Stars has progressed rapidly through the ranks this season and following silver medals at Royal Ascot and Glorious Goodwood, added this Group 2 prize to the Bahrain Trophy he landed at Newmarket’s July Festival earlier in the campaign.

Unable to run in the St Leger due to the fact he is a gelding, the Melbourne Cup could be an option for the winner.

El Bodegon is also set to head to Australia, where he holds a Cox Plate entry.

Ferguson said: “One moment I was concentrating on El Bodegon as I thought Dan was in trouble and the next moment I saw him with a double handful. He gave him a beautiful ride and didn’t panic.

“Credit to both horses, they’ve both run fantastic races and I’m delighted for both sets of owners. They should both have successful careers Down Under.

“At the moment El Bodegon is in the Cox Plate and Deauville Legend is in the Melbourne Cup, but that’s not all set in stone. Quarantine is about two weeks. Hopefully they be in Australia in early October.

“Deauville Legend has improved with every race and has come out of each race so well, the team have done a great job with him, he’s getting better with age.”

Ferguson announced a change in his set up on Wednesday, switching yards in Newmarket.

He added: “I’m moving to Hugo Palmer’s Kremlin Cottage and I’m looking forward to continuing the good work he started there. There’s 96 boxes so almost double what I’ve got now.”

Charlie Appleby has not ruled out a St Leger run for Secret State, who beat Deauville Legend in the King George V Stakes at Ascot.

He said: “It was another solid run and the winner is improving, there’s no doubt about it.

“We are improving, but the winner is improving at a rate of knots. He travelled particularly well and had a nice pitch.

“We’ll see (about the St Leger). We’ll see how it all pans out over the coming weeks.”