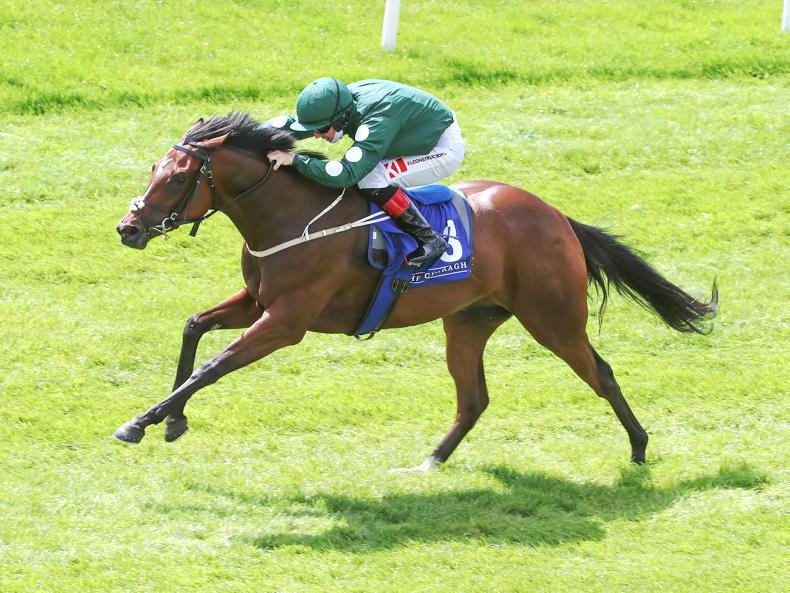 Ger Lyons will step up in class with Cairde Go Deo following her victory in the Listed Irish Stallion Farms EBF Yeats Stakes at Navan on Saturday.

The daughter of Camelot was tackling a mile and five furlongs for the first time under Colin Keane – three furlongs further than she had run over before – but she showed no signs of stopping when coming home eight lengths clear of Hotter Than Hades.

The race was marred by an injury to 4/6 favourite Arbutus, who had won his only previous start but was pulled up when he went wrong in the straight.

Lyons said: “She’s all about the trip and loves the ground. We were going to wait for the Munster Oaks (in Cork), but we took a view at the start of the week that this might cut up, and it did.

“We would never be afraid of Aidan (O’Brien) but you’d be afraid of him the way his horses are running at the moment. I don’t like seeing that (Arbutus being injured).

“We watched the Lingfield trials last weekend and part of me thought did I leave one behind me, but I’d rather do it in Navan and take it from there.

“A mile and a half and good ground at the minute would be the Munster Oaks. Time will tell whether she is worth stepping up into the big game.”

Lyons was pleased to see Cairde Go Deo shine on the track and expects her to be Group three calibre at least.

He added: “These type of horses show me nothing at home. We’ve always seen her as a nice two-year-old last year.

“Even So (2020 Irish Oaks winner) was a quality, quality filly. When we won the Oaks, we were running for pieces. Trip horses don’t show me much at home, I have to see it out here.

“It will be another step forward in the Munster Oaks and then we’ll see.

“She’s a Group 3 horse, what she is after that time will tell. Those Group 2s and Group 1s are like hens’ teeth but we are on the right track.”

Michael O’Callaghan unleashed a smart prospect as the two-year-old Harry Time ran out an impressive winner of the Irish Stallion Farms EBF Maiden.

Always travelling nicely, the son of top sprinter Harry Angel picked up in eyecatching fashion for Leigh Roche when asked, ultimately scoring by a length and a quarter from Broadhurst.

The six-furlong Coventry Stakes at next month’s Royal meeting could now be the next port of call for the 4/1 winner.

O’Callaghan said: “He loved the ground. He’s sort of an uncomplicated horse, a good-moving horse, and very laid-back.

“I’m delighted he went and did it the way he did because if he didn’t, the others are no good at home! We’ve run a yardstick now and we are happy with him, delighted. We obviously have a nice bunch to run. It is no good catching pigeons in the morning if they can’t do it in the afternoon.

“I think he could be a Coventry horse – the stiff six in Ascot for the Coventry.

“He got a bit more idle in front than anything – he won well.”

When asked if he is one of his best juveniles, he replied: “I have some nice ones, but yes he is up there. They have to go and do it.”