The trainer loves nothing better than to win a big race at Newcastle, flat or jumps 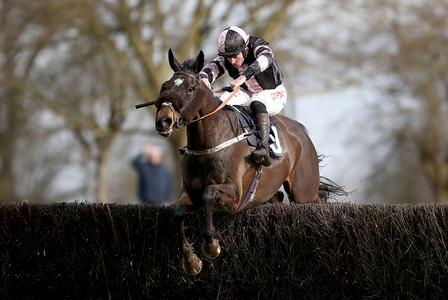 Brave as a lion! Sam's Adventure sees off Crossley Tender in the @vertemam Eider Chase at @NewcastleRaces for Henry Brooke and @BERacingLtd! pic.twitter.com/8PyFczikZH

North-east native Ellison, who was born on Northumberland Plate day, had already celebrated one big prize this season with his staying chaser, who won the Tommy Whittle at Haydock.

Unusually run in spring-like conditions this season, it certainly made for an enjoyable contest with half a dozen or more still in with a chance turning for home.

Springfield Fox had made the running, tracked by The Dutchman who was still going well when unseating Sean Quinlan just before the final bend.

Cyclop, previous winner Crosspark and Salty Boy were all in with a chance, but it was Sam’s Adventure and Crossley Tender who pulled clear.

But to his credit Sam’s Adventure battled back and got home by three-quarters of length.