This time last year, the Maidford-based trainer was thinking of giving up the licence, fast forward to today and she celebrates the third winner of her career at a price of 100/1 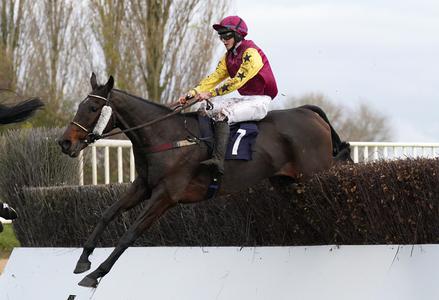 TRACEY Leeson was on cloud nine after seeing 100/1 shot Moroval open his account at the 30th attempt at Southwell on Tuesday.

It is six years since the Maidford-based trainer took over the licence from the retiring John Upson and it took her until earlier this season to enjoy her first success, with Dellboy Trotter registering back-to-back wins at Market Rasen.

With a string of “five or six” horses in training, Leeson admits she has thought about calling it a day, but she was rewarded for her perseverance.

She said: “I thought Dellboy was maybe the one-trick pony and the only horse that could do something for me! He’s been an absolute star this summer, I couldn’t have asked for more from the horse, and he’s currently having a very well-deserved break.

“I took over from John Upson in 2016 and I could write a book about bad luck – everything that could go wrong has gone wrong for me.

“Last Christmas I was at the point where I thought that was it and we couldn’t continue financially, but Dellboy gave me my first winners this summer.

“I worked for John for over 20 years and saw some bad times, which makes you really appreciate the good days you have.”

In the 11-year-old’s four more recent starts he had been pulled up three times and finished ninth of 10 on the other occasion, each time at a three-figure starting price. But ridden by 7lb-claiming amateur James Turner, Moroval displayed significantly improved form in the testing conditions to get the better of 11/4 chance Colemanstown Lad by a neck in the Paul Hart Congratulations On Your Birthday Handicap Chase.

“When John told me he was retiring I thought I had to try and take over the licence because the thing about working with horses, once you do it it’s something you don’t want to be without,” Leeson added.

“It’s very hard to give up and say ‘I’m not doing it any more’ because even though we’re a very small yard, the horses mean the world to me.

“It makes days like today even more special when we’ve been through the tough times we have to get here.”

Of Moroval, she said: “We were hoping he’d go well because he was on soft ground again, but it is a big surprise to see him win.

“We normally run him on good ground, but as he gets a bit older bless him he just struggles to keep up a bit. He’s had a few niggles along the way during the last couple of years.

“He has been trained by Henry de Bromhead and he’d never won. I’d have been delighted if he’d finish fourth today, so for a small yard like us to get a win out of him is amazing.

“It’s a very special day. It might just be a one off, but the horse does try and if he can jump well like he did today and we can get some more soft ground, hopefully he can pick up a bit more prize-money for his owners.”