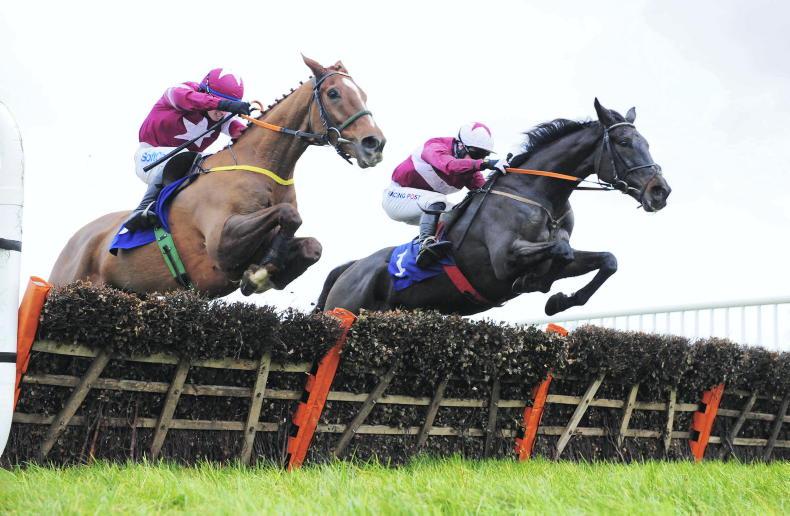 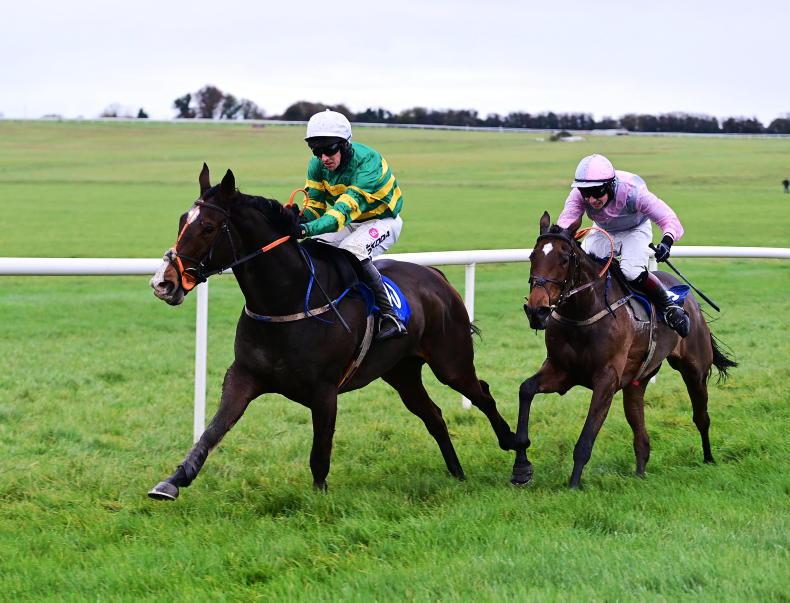 Carrying the colours of Tom Hegarty, the son of Mahler, who won his maiden hurdle at Sligo in October, faced four rivals, three of whom had also won maiden hurdles on their latest starts.

O’Regan, in typically patient manner, held Churchstonewarrior up in rear and waited until late to make his challenge, improving the six-year-old to lead on the run-in and score by half a length from Idas Boy.

Afterwards, Sweeney stated: “It was a good performance and Denis was good on him – he rode him with fierce confidence, that’s the way he rides and he was very good. He is a lovely, improving horse and is coming forward the whole time.

“I still think it’ll be another year before he is a proper horse. Today’s race was a grand race to progress and we’ll see what’s coming up. We might wait for the Dorans Pride Novice Hurdle at Limerick over Christmas.”

The seven-year-old was an early faller on his chase debut last month but, under jockey Darragh O’Keeffe, this time he put in a good round of jumping to make all and eventually beat The Bosses Oscar by a length and a half.

A delighted O’Flynn reported: “He was very good. He did today what we hoped he’d do the last day in Killarney when he was just unlucky and made a mistake first time over fences. He learned from it and is a nice horse going forwards.

“They (Fernhill Tower Syndicate) are a great syndicate and have backed me since I started. We always thought he was good and they could have sold him as a young horse so I’m delighted for them. I don’t know how far he’ll go but I’ll take him as far as he can.”

LEADING owner J.P. McManus and retained jockey Mark Walsh combined to record doubles at the meeting, beginning with the win of the Charles Byrnes-trained Pairc Na Ngael (3/1 favourite) in the Racing Again Next Thursday Handicap Chase.

Walsh produced the Yeats-sired gelding to lead on the run-in and score by two lengths from Ran Ritea and Siberian Star in third.

Pairc Na Ngael is out of top racemare Solerina, who died recently, and afterwards Frank Berry, McManus’ racing manager, reported: “The cheekpieces were a help to him today.

“You’d have to say he has been very disappointing as we thought he’d win a few hurdles but it didn’t happen.

“He got a great ride from Mark (Walsh) as there were a few times during the race when he wanted to get out of it but he kept him in it.

“We’re pleased to get a win with him but with his breeding you’d expect him to be better although it is nice to come and get a win.”

An hour and a half later, McManus’ Walsh-ridden Priory Park landed the ThurlesRaces.ie Handicap Hurdle, causing a 16/1 upset while gaining a first success.

The son of Dylan Thomas swished his tail approaching the final flight but stayed on well on the run-in to beat Nell’s Well by three-parts of a length.

O’Grady later commented: “He has probably grown up a bit as he has got older, and Mark said they didn’t go a great gallop. He did what he needed to do.

“He will go for something similar next and I think he’ll make a nice chaser, maybe even later this season.

“It depends what JP and Frank (Berry, racing manager) decide but he is a nice horse to have.”

An unlucky final flight faller at Clonmel last April, this time Humble Glory scored by a length and three-quarters from Broomfield Hall.

Elliott commented: “In fairness to her, she was unlucky one day in Clonmel (in the lead when fell at the last) but it was grand she got her head in front.

“She was tough and Davy gave her a good ride. She is a staying mare and will jump a fence next year.”

Unseasonably mild weather was the reason for summer jumper The Declaimer’s presence in the Holycross Handicap Hurdle, which the Jim Dreaper-trained gelding won for owner Evan Newell and jockey Keith Donoghue.

Last seen when second at Kilbeggan in July, the son of Arakan faced stiff opposition in Tuesday’s Limerick winner, and even-money favourite Lake Chad but saw off that rival to score by four and a quarter lengths.

Afterwards, Dreaper’s son and assistant, Tom Dreaper, reported: “He has been a consistent horse and while he isn’t overly straightforward to deal with, has been shocking consistent.

“We were second reserve here for a beginners’ chase two weeks ago, and that was the aim with him, but then we had unseasonal weather and this came up and we said we’d have one more rattle. He isn’t even clipped and is going out tomorrow.

“He’ll come back for the spring and he I’d say that’ll be the last time he’ll jump a hurdle for a long time. I’m delighted for the owner/breeders (the Newell family) who are the best in the world.”

Racing concluded with the BetVictor INH Flat Race, which was won in good style by the John Ryan-trained, well-bred Gaelic Arc, under jockey Finny Maguire,

Carrying the colours of Mark Fleming and Mr Westropp Bennett, Gaelic Arc was held up in rear before progressing to move past leader Keepthefaithinme (8/13 favourite) with a furlong to race. Gaelic Arc beat Getaway Charlie by a length and a quarter, with Keepthefaithinme third.

Ryan stated: “He is a nice horse and his half-brother (Galop Marin) has won four French Grade 1s.

“He is a smasher, Finny (Maguire) gave him a lovely ride and he won a bit snug. When he hit the rising ground he was really staying on again.

“He is a gorgeous horse and has his job done now with his bumper won. I’d say we’ll go for a winners’ bumper because he goes on soft ground.”