Jodi O’Donoghue is the racing manager for York Thoroughbred Racing 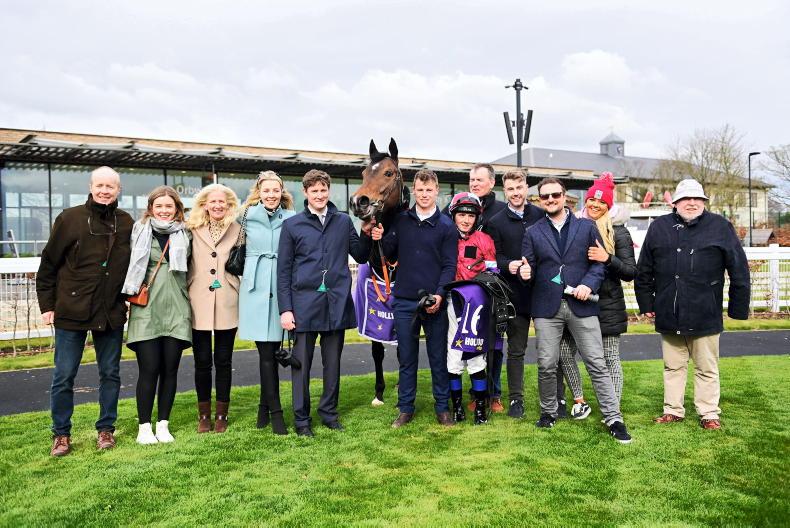 I am from Limerick and now living in Kildare at Currabeg Stables where my husband John O’Donoghue trains from.

John worked for local National Hunt trainers in his teens and his family were always involved with horse so he was always interested in racing. John grew up in Mallow, north Cork.

I didn’t get involved with racing until I was at university and I was into show jumping when I was younger.

When John and I moved to Britain, John worked as head lad for David O’Meara in Yorkshire. We wanted to start a commercial syndicate to get people involved to have some fun at the races and also to trade horses in training and York Thoroughbred Racing was created.

We had some great owners get involved both locally and from all over really. We bought horses at the HIT sales and breeze-ups, ran them for the season and sold them on at the end of their season with the aim being to turn a profit. It turned out to be quite successful and the majority of horses we bought for York Thoroughbreds managed to win at least once and were sold on for a profit.

What was your best day at the races and why?

One of our best day’s was probably the day Prince Elzaam won at Thirsk Racecourse a few years ago (2018) for David O’Meara. We had over a dozen of people involved in him and he gave us some terrific days out that season – he ran a great race at York to come second which was a fantastic day out for the entire syndicate and then went on to win again before we sold him at auction.

He made 60,000gnsat the Autumn HIT Sale just over five months after we bought him for 15,000gns. He is still winning races for his owner Sheikh Sultan in Bahrain.

However, I think Cailin Cliste’s win at the Curragh a few weeks ago may have topped that as not only was it a great day for us as owners, but it marked John’s first winner as a trainer for O’Donoghue Racing so it was very special indeed.

The guys involved in Cailin are a fantastic bunch and were very patient as she had been off the track a long time so we were delighted we could finally give them a winner! We bought her for the syndicate at Tattersalls Book 3 Yearling Sale for 22,000gns from Taroka Stud and to win like she did against such a large field of well-seasoned handicappers was amazing!

What is the biggest drawback about being an owner?

I think the biggest drawback is the unknown, which can also the best thing about this game as a yearling can turn out to be anything. You are investing in an animal that is very often totally unproven. Even getting a horse to the racetrack is a challenge as there can be many setbacks along the way.

This is the most difficult thing for owners; when they have bought the horse, have it in training for a length of time and then the horse gets a setback or an injury which is nobody’s fault. It can just be very frustrating but unfortunately something that comes with the territory of having a thoroughbred.

This is our first horse in training in Ireland as a syndicate so we haven’t got a massive amount of experience across many tracks here. It will be hard to match that of the Curragh on that Sunday – they were so accommodating and welcoming to all of us. The owners enjoyed a lovely celebratory glass of champagne in the Queens Room after the race and each member of staff we met were so friendly and looked after us very well.

This is a bit biased as the trainer is my husband and co-founder of the syndicate! However, up until now we had David O’Meara, Tom Clover and Ken Condon training YTR horses, all of whom were fantastic and we had great success with!

We no longer have horses in Britain; we are concentrating on our training business now at Currabeg Stables and our only horse for the syndicate is now trained by John O’Donoghue.

I think it is very important for a trainer to have good communication and total transparency with an owner about their horse as things can go wrong from time to time but it makes it easier if the owner is kept in the loop.

Also, it is important for owners to know that they are part of the horses’ journey and that their opinion matters and is taken into account.

What improvements would you like to see racecourses in Ireland do?

A lot of smaller racecourses here don’t have the facilities or the funds for better owner areas – especially when it requires catering for larger syndicates.

I think that syndicates are the future of racehorse ownership and therefore we will need to start putting a better emphasis on the importance of encouraging more syndicates and looking after them on a raceday.

As we know, most days don’t bring winners for owners so providing the best experience possible on a day out at the races is imperative to retain these owners in racing long term.

Racecourses in Australia seem to have this down to a tee as the majority of racehorse ownership down there is through syndication so looking a little closer at how they do things may be a good start when racecourses are looking to make changes/improvements in this area.

What can trainers or HRI do to encourage owners to keep horses in training?

It’s all about the experience and making it as accessible and as straightforward as possible. So far, I have had a great experience with HRI – I have found them very helpful and accommodating with all queries. I think this applies to all owners not just syndicates.

I know that HRI have clamped down on the regulation of syndication which I also think is a step in the right direction because it gives autonomy and greater confidence to new owners wishing to get involved in syndicates.

This is important as our industry can be quite daunting for new entrants and they can often be deterred when they hear the past stories of others being misinformed and mislead in ‘non-regulated’ syndicates.

We started the syndicate when we lived in York; at the time I don’t think we knew how far it would reach and that it would eventually lead to having a winner in Ireland not to mind the Curragh! Hopefully it will be the first of many more to come.

Buying a horse, what do you look for?

It depends on the owners involved and what they want. We tend to go for a racy athletic type that will run at two but has the potential to progress into a nice three-year-old. We don’t focus too heavily on the pedigree but there has to be some sort of success on the page.

We don’t have a preference on whether we buy colts or a fillies but they have to have a presence about them and a good walk even if they aren’t a 100% correct as we keep our budgets low.

For Cailin Cliste, I think the plan will be to return to the Curragh in the coming weeks for another handicap and give the owners another good day out hopefully! Thankfully the calendar has a number of different routes that Cailin could take depending on how she progresses.

She hit the line very strongly on her Curragh win and we are happy with her at six furlongs. There may be scope for a different trip in time.

Irish racing is very competitive as we all know. There are a lot of negative comments regarding the British calendar as the sheer number of races and options are depleting their racing product.

Perhaps we could aim at something in between here. In Ireland, I think there is scope for an increased fixture list.

A second all-weather track would make a huge difference and I am sure any additional fixtures would be greatly received.

If you can get involved with experienced people in the game that you trust and who have a good reputation that is a great place to start.

That, along with a bit of patience and luck and you’ll find that success will not be far way and then you’ll wonder why you didn’t get involved in racehorse ownership sooner!

You will then realise what a privilege it is to be involved in the life of a racehorse.

Jodi O’Donoghue was in conversation with Olivia Hamilton