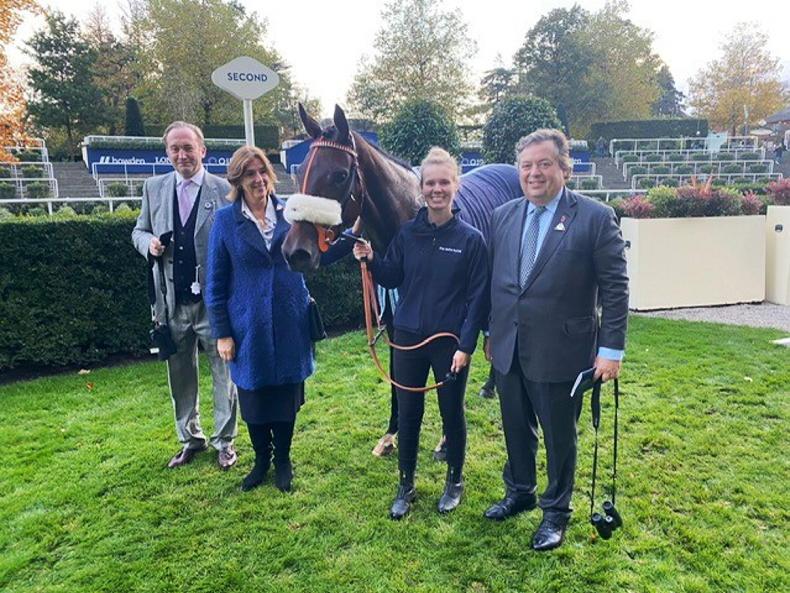 For many years I aspired to be a racehorse owner and then eventually became involved in a couple of leasing syndicates which had many members so didn’t cost too much. Mrs Danvers was the best horse that I was involved in. She was leased by the Turf Club Racing Syndicate and was unbeaten as a two-year-old winning five races.

Fortunately I have now been able to venture into the world of the owner/breeder in a very small way.

What was your best day at the races?

Since becoming involved with Ascot Racecourse 10 years ago I have been lucky enough to witness many wonderful performances. (Sir Francis is The Queen’s Representative at Ascot.)

I think the most memorable was seeing Frankel win his 14th and final race on QIPCO British Champions Day in 2012. To end that career unbeaten was so remarkable and the affection showed to the horse after his last victory was a great example of the emotional attachment that the racing public can have with a horse.

Other than that, watching Mighty Moss, who was bred by my mother (Melissa), come a close second to Istabraq in the 1997 Royal Sun Alliance at Cheltenham was pretty exciting.

The biggest drawback for an owner?

Often being unable to go to the races when you have a runner although being able to watch races live so easily on iPhones and other devices definitely softens the blow!

I haven’t been able to go racing much in Ireland recently thanks to the pandemic but I am a big fan of my local racecourse at Limerick which looks after owners and racegoers very well in my experience. The Ascot team had a successful trip to Listowel to see the 2019 Kerry National when we were brilliantly looked after by the committee.

Flat or jumps, which do you prefer?

When I wasn’t directly involved in racing and busy with work and family in my 30s and 40s, I found it easier to keep up with National Hunt racing but now I am fortunate to be able to enjoy and follow both closely and I breed and race horses under both codes.

Openness, clarity of communication and a sense of humour in the face of adversity, which is more often than not!

What improvements would you like to see racecourses do for owners?

I think that owners’ facilities are improving on racecourses generally. They have to do so if racing is to compete effectively for the next generation of owners – no doubt some courses will be ahead of others at times but that is inevitable.

I know that Naas and Listowel have recently opened excellent new facilities while the new Curragh grandstand looks really good and, after inevitable teething issues (not for the first time with a new grandstand!), I understand that it is working well.

It is encouraging that the yearling sales this year have been well supported and new owners are coming into the sport as others leave. I am sure that the growing success of syndicates is very important as fractional ownership is a great way for most future owners to have their first experience – just as it was for me.

Trainers need to keep providing a good experience for owners and the HRI an effective race programme and efficient administration at a reasonable cost.

Social media gives trainers and the sport as a whole a wonderfully effective way to communicate with owners and some have been quicker to do this than others.

The significance of your colours?

My ‘strawberries and cream’ colours are very important to me – they belonged to my paternal grandmother (Lady Brooke) who had horses in training in Ireland before World War I, when ladies were not allowed to own racehorses in their own name – her horses ran under the name ‘Mr Silver’ until she married.

Later she had horses with both Charlie and Dermot Weld amongst others and some of my earliest racing memories are going to watch her horses on Munster tracks with my father in the 1970s. At the time of her death in 1982 she had a horse in training with Peter McCreery at Clane near her home outside Celbridge.

I started a syndicate in January which is called the Friends of Ebony Horse Club – the Ebony Horse Club is a riding school in the middle of Brixton in London surrounded by tower blocks. It gives local children and young people the opportunity to ride and connect with horses and the three syndicate trainers (Jim Boyle in Epsom, Charlie Fellowes in Newmarket and Jamie Snowden in Lambourn) have all offered stable tours and work experience to young people from Ebony.

We have had three winners this year carrying the colours of the Duchess of Cornwall who is the charity’s patron.

Look out for Ebonello this winter – a four-year-old Presenting mare trained by Jamie Snowden who was named by the children at Ebony. Twenty generous syndicate members have funded the cost of leasing and training three horses for two years and all made a direct donation to the charity.

Buying horses what do you look for?

I am an amateur in these matters but a good walk and a kind eye must be top of the list.

Who do you have in training?

Our first homebred on the flat is called Pita Pinta (by Sir Percy). She is trained by Fozzy Stack and likes soft ground – she won as a two-year-old at Gowran Park and after a long wait for rain recently won handicaps at both Navan and Galway in a week. I was a part-owner of her dam, Bantam who was bred at Airlie by Mrs Sonia Rogers and Sir Thomas Pilkington. The other two partners were Richard Pilkington and Diarmaid Kelly and they retained their 20% shares when I bought out the co-breeders at the end of Bantam’s successful racing career when she came back to our farm in Co Limerick.

We are looking forward to next season for Pita Pinta who stays in training as a four-year-old and who we would like to breed from in the future.

We have also had horses with Jessica Harrington and I am involved in two jumpers with Kim Bailey in England, one of which is El Presente who could be heading for the Grand National in 2022. Chianti Classico was second in the bumper at Ascot recently - beaten only by a German raider by Galileo!

Chianti Classico will stay in bumpers for the rest of the season.

We have a Roaring Lion yearling filly who has suffered a setback but we still hope will go into training next spring.

We also have a two-year-old Getaway filly that will go jumping when the time comes. Pita Pinta’s dam Bantam is in foal to Sea The Moon so fingers crossed.

Either bring them home to the farm or else ensure that they have a purpose and a happy home elsewhere for as long as that is possible.

With a bit of effort and better communication I think that the non-racing public can be reassured that the racing industry lives up to its responsibilities on this issue.

I think that smaller owners and trainers can be competitive if the race programme provides enough opportunities.

What advice would you give to someone thinking of becoming an owner?

Syndicates are a wonderful place to start – particularly those which lease horses or have large numbers of members which keep the costs down.

Social media enables information and content to be shared very efficiently and quickly and that makes the experience both interesting and exciting.

Experiencing a winner as an owner is a wonderful thing to share even with hundreds of others.