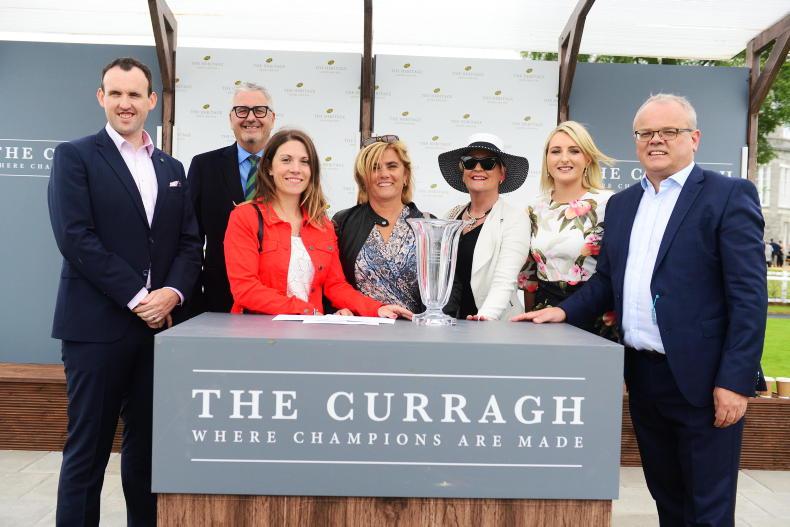 I was brought up in Belfast and also lived in Bangor. I bought a small holding at Aghalee near Moira but until I met Fiona Wilson about 25 years ago, I was not involved with horses. I played football and rugby.

Fiona came from a hunting and eventing background and that is when my love of horses started.

Fiona hunts with the Co Down and Iveagh packs and was involved in the point-to-point organisation, financing the hunts and we had a couple of pointers as well.

Natalia Lupini came over as a hunt groom to us in 2009. She always had ambitions to be a trainer and we introduced her to a few contacts.

She set up her own yard with the invaluable help of Bertie Butler. We decided to support her by sending her a couple of horses of which Blairmayne is the most successful.

Natalia has gone from strength-to-strength, and her small yard punches above its weight. She is a very good trainer.

It’s a good news story for Irish racing that an Italian national was inspired to come here and make her career in Irish racing.

What was your best day at the races?

Any day at the races you win is a great day. As long as the horses run well and come home safely that’s the number one priority.

When Blairmayne won at the Curragh on Irish 2000 Guineas day in 2019, that was a memorable day. There is such camaraderie in racing and we really felt it that day.

Horses being balloted out. I’m semi-retired, my business is property development, and I have brought a lot of business friends and those from the legal professions into racing.

Some of them have been involved with the partnership the horses run under, the Raintree Racing Partnership. Some have taken to racing and invested but I have to say that some have become pissed off by the horses never getting a run.

HRI encourages owners to bring in new blood to ownership but no one wants to join a sport if they can’t even participate.

Most horses are rated 75 and below so we really need more races and more prize money for lower-rated horses.

Sometimes we have been balloted out four or five times – it’s almost impossible to keep new recruits enthusiastic consequently.

The grass roots of racing ownership have to be kept healthy – not everyone can have group winners or pay huge amounts of money for horses. A winner from a small yard gives everyone a boost.

In your experience, which racecourse in Ireland treats owners the best?

Naas and Leopardstown operate to an excellent standard.

Down Royal, under the new ownership of Mike Roden’s group, has shown great improvement. The team led by Emma Meehan and Claire Rutherford in marketing are excellent and make a point of looking after owners.

Flat or jump racing, which do you prefer?

With other commitments in the winter e.g. hunting, I have more time to go flat racing right around the country in the summer.

What qualities do you look for in a trainer?

Someone who listens to you and works with you. Some trainers focus on what they want to do but plans should be drawn up by agreement.

The trainers are the experts but an owner is entitled to take a keen interest – they are paying the bills.

What improvements would you like to see racecourses in Ireland do for owners?

Lots of courses’ facilities have improved – the Curragh is world class. But for me part of the quaint appeal of racing in Ireland is visiting the diversity of the tracks. I love racing at Bellewstown.

The steep rise in costs is a problem everywhere and racing doesn’t escape. Training fees and all the other ancillary fees, the cost of feed is phenomenal, fees for the Curragh gallops are going up and the cost of travel.

That’s the one downside of being in Northern Ireland – there are only four flat meetings a year in Down Royal so that’s a lot of travelling racing the horses.

Some owners may drop out consequently; those involved through clubs and syndicates will not be so hard hit individually. Racing is a passion for a lot of owners that is hard to give up.

The upside is that if there are less horses in ownership, there will be less competition to get a run!

The green is for Ireland as a keen rugby player and the blue stripe is for the Northern Ireland football team. I support both.

Natalia came up with the name Raintree - maybe after a gin and tonic or a glass of wine!

Usually recommendations from people. I enjoy going to the breeze-ups and seeing them in the flesh as well as studying the pedigree. I don’t like a high head carriage while the horse is racing. I like the head down – that attitude that says ‘I’m here’.

Blairmayne, and Alma Libre and Nil Desperandum in other partnerships and a four-year-old Xchanger.

Blairmayne was just beaten by a neck last time out at Cork (May 6th) over seven and will run again when the ground is right. He doesn’t like it soft.

Alma Libre was a good third last weekend at Leopardstown to Jessica Harrington’s Supagirl. Hopefully she will progress.

I have a yearling colt by Decorated Knight and a colt foal by Sands Of Mali out of Shoofly by Azamour.

Four-time winner Annabelle Rock is in foal to Cotai Glory.

Being such a hoarder, I will probably keep them and put them in training.

We have kept some for breeding. Some horses are suited to and love the racehorse to riding classes, other retired racehorses can be suitable for the riding for disabled organisation.

Not every horse is like that – Blairmayne is too highly strung. You have to make a plan for their retirement – you can’t just ship them on to someone else where it’s a short journey to the abattoir.

Improved prize money at the grass roots level. Irish racing is most competitive at ratings of 75 and below. Look after that – that is where it all begins for most people. Unless you cultivate owners at that level you will lose them.

There is no buzz better than your horse winning. There will be eight races on the card with an average of 15/16 horses per race. There will be only eight winners among those.

But be prepared anything can happen. People enjoy the kudos of owning racehorses but might not see the peripheral story.

Your horse pulling a muscle or other setbacks are par for the course. People must understand that.

Dougie Sloan was in conversation with Olivia Hamilton 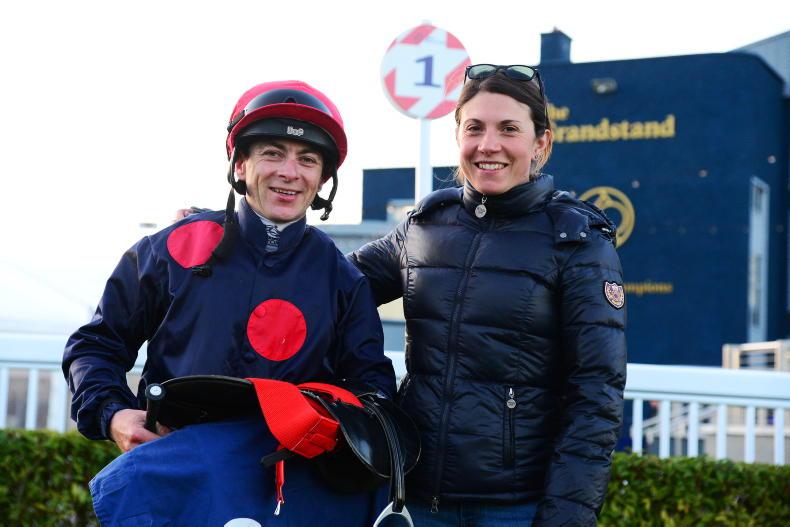 Margie McLoone
MARGIE McLOONE: Lupini lands first double
Blairmayne made all to land the six-furlong handicap for a seventh success 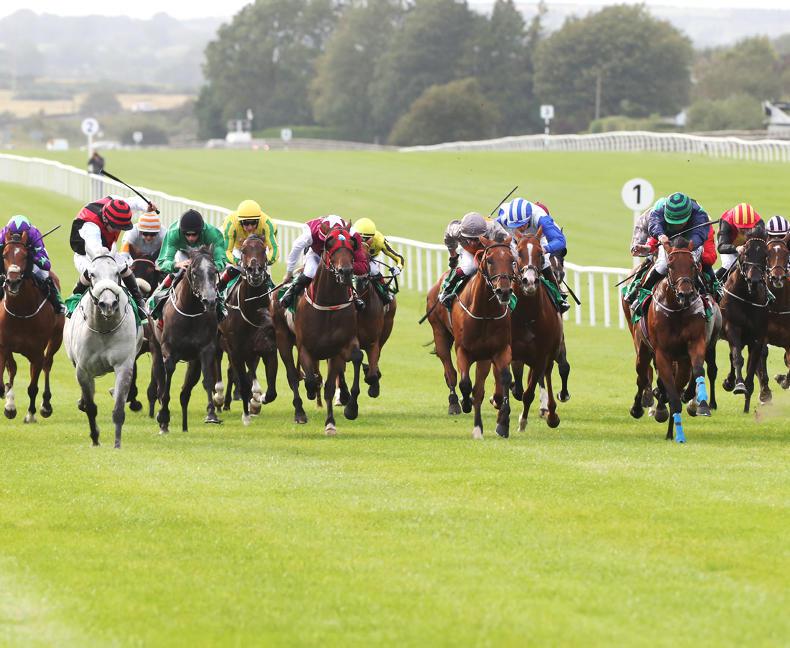 CURRAGH FRIDAY: Massa Lubrense brings up quick second winner for Hartnett
Blairmayne was in winning form at the track which seems to bring out the best in him and could return on Irish Champions Weekend 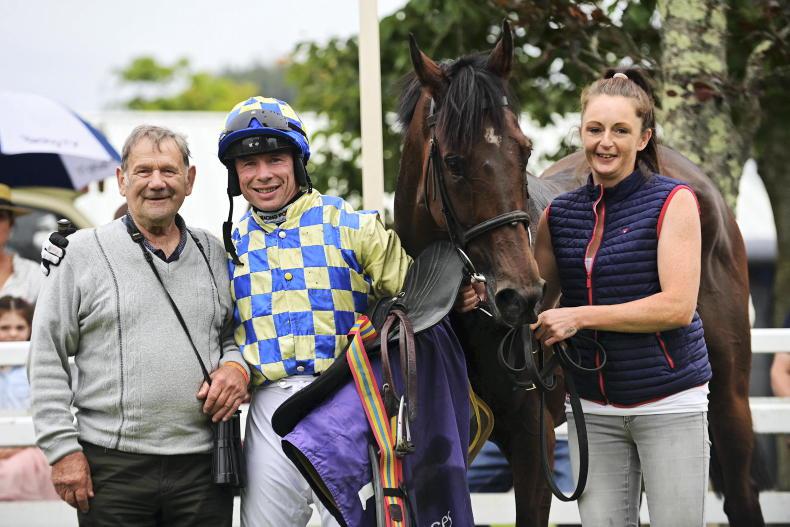 Margie McLoone
VIEW FROM ABOVE: Harry Smyth strikes at Sligo
Margie McLoone posts a round-up of the past week's winners with a northern connection 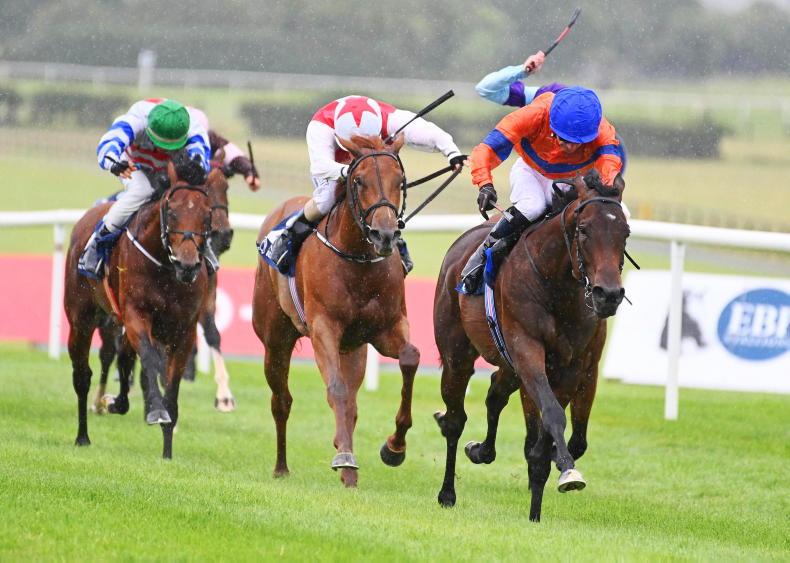 Ryan McElligott
NAAS MONDAY: Voce Del Palio impresses in Ballyhane
The Joseph O’Brien-trained colt made the most of his draw on a card that saw two classy juveniles for Aidan O'Brien and Jim Bolger