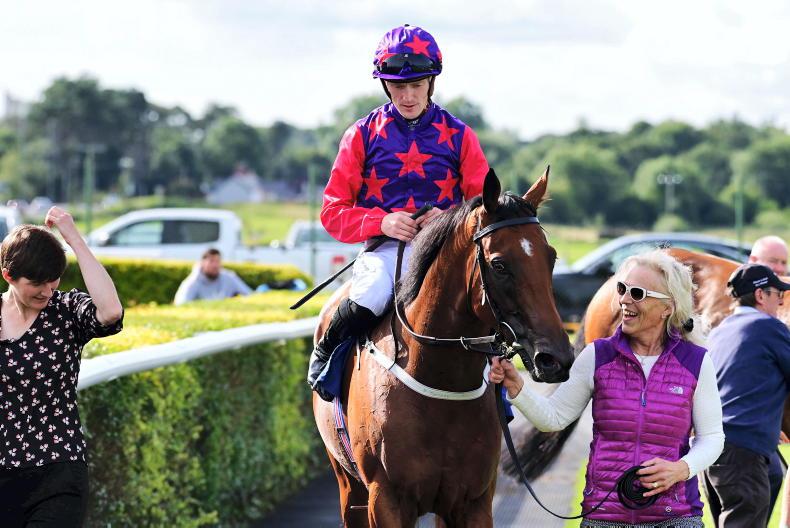 I and my husband Mark have a small stud farm in Monasterevin, Co Kildare for the last 25 years. We own only a few broodmares and we generally tend to produce and sell the yearlings hoping to get them to good trainers.

Erosandphyche couldn’t get into any of the big sales in the autumn so we decided to go for the following year’s breeze-up sales, but he got a setback few days before he was due to travel to Newmarket and we had to withdraw him.

At that point we really didn’t have any other choice than to go down the training route. ‘Reality is built on dreams’ has been our motto for all these years of breeding, so that was that! And if you are a breeder, you always dream of breeding a good one.

Your best day at the races?

We bred and consigned Larchmont Lad at the Tattersalls Ireland yearling sales few years back (2015) and he went on to win a Group 2 and a Group 3 at the Curragh and they were definitely good days at the races.

Having a horse in training is a very expensive business but Eros did show potential at an early stage of his prep and we thought it could be a good investment for the future, especially because at that stage we also owned his dam (Sciolina).

In your experience, which racecourse in Ireland treats owners the best and why?

Our experience with Tipperary and Cork has been very positive obviously due to the horse winning there. We were really spoiled at both racecourses.

Flat or jump racing, which do you prefer and why?

We like both NH and flat racing, but realistically flat racing has a quicker return for breeders.

What qualities do you look for in a trainer?

The racehorse ownership experience was new to us and full of ups and downs along the way. There are so many things that can go wrong in a very short time.

You need to trust your trainer to do the best by the horse first and then by the owners.

We are extremely lucky to have Eros with Paddy Twomey. When I was working at Anglesey Lodge Equine Hospital, he was a client back then and we met on and off at the sales and other places. Eros was with a different trainer and was off injured last year.

While he was on a break, we decided to look at all our options again. Paddy’s record of success speaks for itself so we were delighted when Paddy said he would take him on and train him.

How do you think the current crisis will impact on racing in general and on ownership in particular?

There is no doubt that the current economic crisis will impact on racing and ownership.

What is going on in the UK is scary with established trainers and owners giving up.

I worry about the baton being passed to the next generation of racegoers. Apart from the festivals, there are not many younger people attending an ordinary race meeting – it’s mostly my generation.

When my children were young there was an excellent creche and playground at the Curragh where your children could enjoy themselves, leaving you the freedom to do so as well.

Now you see a young mother pushing a pram about – not enjoying herself!

Every kind of facility and special offers have to be promoted to attract the young. Racing in France and Italy, it’s €5 to get in including a racecard on an ordinary day.

If I was young with not much disposable income, I’d go somewhere else.

We went to the Dingle Derby last weekend – it was absolutely packed! It was €10 per car, and there were lots of amusements for the kids.

The weather was great but the main asset was the welcome and the accessibility for families.

A lot more needs to be done to involve the next generation otherwise there is the risk of racing and racehorse ownership becoming extinct. Owners are the ones keeping the show on the road and everything possible should be done to encourage them to stay in the game.

I hope the syndicate owner numbers hold up in this cost of living surge. Syndicates are such a good way of spreading the costs and they are also good fun!

The buzz from a syndicate win on track makes for a great atmosphere and the excitement is infectious!

A good horse always pays for itself.

The racing colours are red for Mark and purple for me. We just mixed them together and put in the stars in for luck.

We don’t have any other horses in training at present, but probably would do the same again in the same circumstances as we have to help our broodmares to get up the ladder.

What’s next on the agenda?

The plan for Erosandpsyche’s next run is the Listed Abergwaun Stakes over five furlongs at Tipperary on August 26th. Then depending how he gets on there we might progress to group company, possibly on Irish Champions Weekend.

Yes, we have some good young stock being prepped for the sales. This year we are looking forward to the sales as we have a smashing Footstepinthesand colt, half-brother to Eros, going along with another couple of nice colts.

We picked his name from Greek mythology; it means love and soul and you need both of these when you work with horses 24/7.

At the end of his racing career Eros will retire here at the farm where he was born and I’m sure he will be happy to babysit the young stock.

Bills are going up across the board and if you have horses in training there are lots of hidden costs.

Strong prize money is obviously very relevant and should allow small owners to compete at the higher level.

Entry fees should be also looked at as there seems to be percentage increases imposed on owners which means costs build up very quickly.

I would encourage people to get involved. My main advice is to evaluate your horse. Be realistic about the expectations of your horse. We all think they will all be winners! We sent a filly last year to a different trainer. After three to four months, it was made clear she had no ability so it was out to grass and that was good to know. Since then her family have won so she has prospects in a different sphere, in breeding.

That’s my main advice – be realistic about your expectations.

Barbara Fonzo was in conversation with Olivia Hamilton