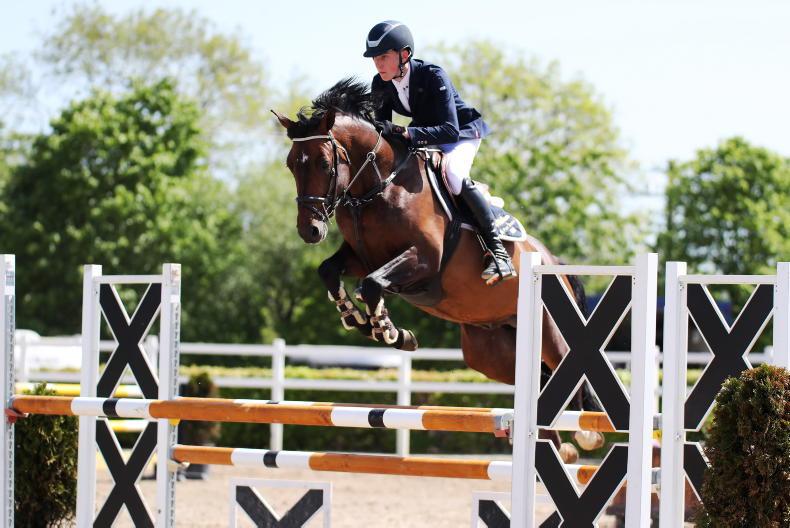 Coen Williams (M) and Gilton Des Islots (6yo), winners of the 148cm six and seven-year-old RDS qualifier at Barnadown. George Mullins Transport was the sponsor throughout the weekend / Laurence Dunne Jumpinaction.net

THE RDS pony, young riders and children on horses qualifiers moved to the Leinster region last weekend with Barnadown Equestrian in Wexford playing host to the second round. The generous sponsor for the weekend was George Mullins Transport.

In the 128cm qualifier, 46 combinations battled it out and from those, just six triple clears were delivered in a 10-way-jump-off. Placed seventh in the opening qualifier the week before, Kilkenny’s Robbie Sheehan and He’s A Touch of Magic showed an improvement in form as they took the win, clear in 38.12.

Munster riders filled the next five slots. Best of those was Harry O’Callaghan who played it safe with Kilcreene Snapdragon and delivered a clear in 43.54 for second. Third place belonged to Charlie Flynn and Penchwintan Glynle, clear in 43.09, ahead of Aimee Moloney and Magnificent Magnet, clear in 44.26.

Slotting into fifth place was Sam Donovan and Millcroft Dow Jones, clear in 46.75. Completing the top six was Anna Moore and Castlequarter Jack who stopped the clock in 46.75.

Victory in the 138cm decider went to Leinster’s Claudia Carroll, clear in 71. Of the 40 starters, just six single clears were delivered. Fellow young Leinster rider Emily O’Brien took the runner-up slot when she came home clear in 71.24 aboard Youghal Paddy.

Connaught’s Harry Rush took third place with Conazar Jayne in 71.74. Fourth place belonged to Charlotte McCracken and Drumcaughey Diamond who clocked 73.91, ahead of Leinster’s Jack Kent and Latoons Full Back in 74.83. Accounting for sixth place was Conrad Sweeney and Sakama Chezni in 75.26.

The 148cm division attracted a large entry with 66 combinations going to post. This class was hard fought with eight combinations booking their place in the third round. Of those, six triple clears were delivered. Leading the victory lap was Ulster’s Katie McEntee and the Miguel Bravo-owned Carrickaduff Pet, who galloped home in 39.75. Annie Boland and Jimtown kept the poles in their cups in 42.29 for second, ahead of Ben Walsh and Derryvane Belle, in 42.48. Both Lauren Murphy (Corbeagh Legand) and Emily Moloney (Castlehill Titan) clocked 42.54 to share fourth place.

The final clear of the class was delivered by Jenny Dunlop and the eight-year-old Cwmello Champagne Charlie, who crossed the line in 44.29.

The 148cm six/seven-year-old class saw 61 combinations battle it out for their place. Leading the victory lap was Coen Williams and Gilton Des Islots who answered all the questions of the three rounds in 35.84. Owned by Olga Doyle and Greg Broderick, this six-year-old stallion is by Diamant De Semilly out of Tabelle Des Islots.

Fellow Munster rider Kian Dore and Milchem Original (7yo) maintained a clean sheet in 37.41 for second place. Emily Moloney was back in the ribbons, this time taking third with Lady Crown (6yo), clear in 38.69.

In the 128cm six/seven-year-olds, 24 combinations battled it out. Taking the win was Ulster’s Cara Garrity and the seven-year-old Goldie Locks, followed by Mollie Russell and the six-year-old Sugar Dolly. Taking third place was Sam Widger and Castlefield Messie (6yo).

Victory in the 138m six/seven-year-olds went to Munster rider Tiernan Cummins (Cill Na Mona Babe). Claiming the runner-up spot on the six-year-old Shadow Dash was Ella Rush, while in third place was Jack Kent and Grantstown All Action (7yo).