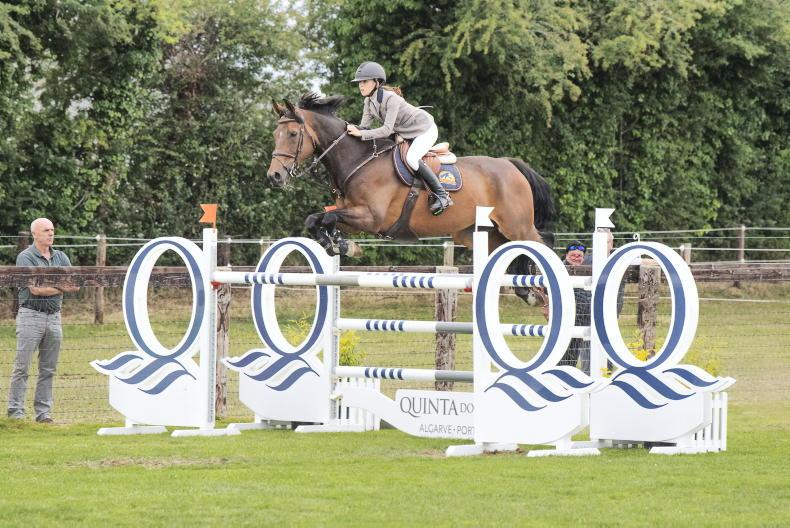 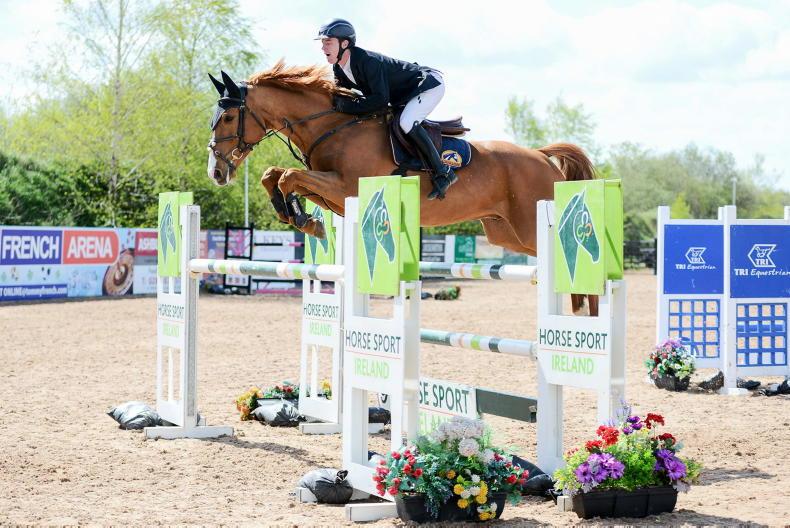 Mikey Pender riding HHS Calgary, (pictured at The Meadows EC) was the winner of the 1.30m competition at HHS Show \ Tori O'Connor Photography
Previous Next

THE HHS Charity Show saw riders flock to the home of Miguel Bravo and Marion Hughes last Tuesday in a bid to take home some of the €15,000 on offer in the HSI-supported show.

With €8,000 on offer in the four-year-old Championship, all of the 41 combinations had their eye on the prize. Following a competitive class, the first three placings and sixth place were filled by young riders.

Claiming victory, after being awarded 238 points by judges Dan Walsh and Alain Storme was last week’s European team bronze medallist Francis Derwin Jnr and MB Chilli Dreams. Owned by his father Frances Derwin and bred by Michael Beattie, the gelding is by H&M Chilli Willi out of Vienna.

Robyn Moran finished seven points behind with her father Brian’s Bonnaroo to take the runner-up spot. Bred by Catherine Thornton, the gelding is by Aganix Du Seigneur out of the Lux Z-sired Royal Irish Lux.

Only one point separated the next placing as Harry Wood and the Ennisnag Stud-owned Casanova PB slotted into third place. Aoife Dooley’s performance on Marguerite Ryan’s Kilnamac Cody saw this combination awarded 226 points for fourth place. Bred by James Ryan, the son of Diamant De Semilly is out of the the Cruising-sired Kilnamac Cruise.

Fifth place belonged to Tomas Doyle and Sandro Van De Berghoeve, when they were awarded 224 points. Owned by Mikey Pender and bred by Paul Van Den Bosch, the Belgian Warmblood stallion is by Hunters’ Scendro out of Mademoiselle de Muze.

It was another very close call as Eoin Brennan’s performance with the Tim Brennan-owned Augustus Z saw him awarded 223 points for sixth place. This home-bred gelding is by Aganix du Seigneur Z out of GCS Athena who is out of the 1.60m performer MHS Attraction.

In the 1.40m Hive Equine Safety Initiative Grand Prix, young rider Marta Hughes Bravo proved to be a popular winner of the €4,000 class. Riding her mother Marion’s HHS Figero, she lodged the winning clear in 29.92 seconds. HHS Figero is a 16-year-old gelding by Guidam out of the Cavalier Royale-sired Dreaming Of U. In May this combination took the runner-up place in the Orthoderm Clinic 1.35m Championship and third place in the 1.35/1.40m Young Rider qualifier at The Meadows.

In total 40 combinations lined out to take up the challenge and from those, 12 delivered double clears in the two-phase class. It was a very close competition with the top eight all coming home within 33 seconds.

Fellow Kilkenny rider Adam Carey came close to catching the winner as he crossed the line with Quebello D, in a time of 30.17. Owned by Philip Carey and bred by Elavge Denfer, this 12-year-old French-bred gelding is by Quidam De Revel out of Salina.

Little separated the next placing as Francis Derwin and Deep Pockets galloped home in a time of 30.18 for third place. Derwin had just returned from the FEI European Championships in Oliva, Spain, having formed part of the team that claimed bronze and took sixth place in the individual junior final.

This combination had recently claimed the Gain/Alltech Grand Prix in Cork Summer Show. Deep Pockets is owned by Jim Derwin and is by O.B.O.S Quality 004 out of the Cruising-sired Simply Chic.

A clear from Emma McEntee and the John Hoyne-owned RHS Blue in a time of 31.86 saw them slot into fourth place. Bred by Deirdre McGuckian, this nine-year-old mare by Cheers Cassini out of Tullibards Ask Benny is proving very consistent for McEntee at this level.

Portuguese international rider Duarte Seabra and Fernhill Clooney followed closely behind, stopping the clock in 32.09 for fifth place. Owned by Carol Gee, the 13-year-old gelding is by Corland out of Arizona.

Returning from the Europeans where she was also part of the bronze medal team, Emma McEvoy took sixth place in the line-up with Max O’Reilly Hyland’s eight-year-old Aconzina (32.11). A new ride for McEvoy, the German-bred is by Action Breaker out of Conzina. Mikey Pender riding HHS Calgary, (pictured at The Meadows EC) was the winner of the 1.30m competition at HHS Show \ Tori O'Connor Photography

It was another home victory in the 1.30m (inc. seven-year-old Plusvital Mini Grand Prix) as Mikey Pender led the victory lap when he was the fastest of 17 double clears in a time of 24.08 with the seven-year-old HHS Calgary (Luidam x Don Juan De La Bouverie), who is owned and bred by Marion Hughes.

The next two slots were also filled by seven-year-olds with Barry O’Connor’s Kainville VDS taking second place when Jenny Rankin partnered the Numero Uno-sired gelding to a clear in 26.64.

Conor Campion was less than a second behind with the Neil Campion-owned Cillbhrid Hank, crossing the line in a time of 27.76 for eventual fourth. Bred by Marianne Power, the gelding is by Diamant De Semilly out of Cushinstown Imp.

Fifth place belonged to Sean Foley when he came home with Gerry Marron’s Kinmar Bespoke in a time of 28.60. Duarte Seabra and Fernhill Clooney returned to the line-up, taking sixth place when clocking 28.62.

Winner of the Butler Court-sponsored 1.10m (Inc 5YO) was amateur rider Lorraine MacGuinness when she delivered a clear aboard Horseware Kinmar Night in a blistering time of 25.20. Almost two seconds slower and slotting into second place was Caelinn McCabe and Kuda, clear in 27.19.

Third place belonged to Daren Hopkins and the Ballywaters Farm-owned Quincy Della Caccia, when they kept all the poles in place in 27.78. Mikey Pender took fourth place with his own Sevilla Van De Berghoeve Z, clear in 28.08, ahead of Michael O’Neill and Take A Gamble, clear in 29.30. Completing the top six line-up was Sarah Lang and RNG Vantage Point, clear in 29.43.

Mickey Pender was back in the winner’s enclosure, claiming victory in the 1.20m (inc 6yo), riding the Bravo Hughes-owned six-year-old HHS Rose. He was fastest of the 21 double clears in 28.72. Bred by Miguel Bravo, the mare is by Lamm De Fetan out of HHS Forty.

Taking the runner-up spot after they clocked 29.35 was Ciara Desmond and Disco Volantee, ahead of Marta Hughes Bravo and Miss Belgium III in a time of 30.70. Returning from the European Championships, Seamus Hughes Kennedy made his presence known on home soil as he partnered Curra Ferro to a clear in 31.58 for fourth place.

Slotting into fifth were Barbara Allen and Carnlea Beach OKE, in a time of 32.17, while in sixth place was Duarte Seabra with Fernhill Beau, in 32.38.