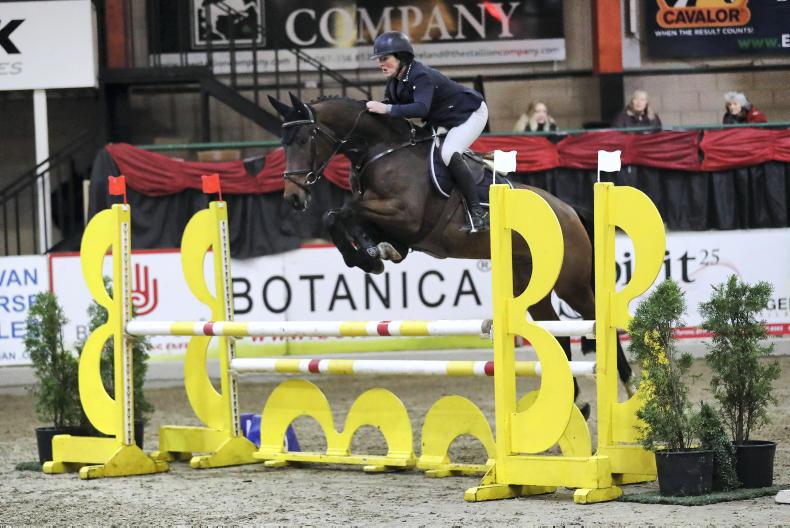 Judges Ian Fearon, Paddy O’Donnell and Derek McConnell awarded the gelding a score of 193.6 to secure the top spot from the 19 horses that made it through to the final in the main arena. By Celtic Hero B Z out of Deeply Dippy K (Luidam), he has been competing since April of this year and is now jumping consistently around a 1m track. The runner-up spot on a score of 191.6 went to Shane Goggins with Ger O’Brien’s Diamelusina.

The mare is by Diamant De Semilly out of the Germus R-sired V.Amelusina 12 and Cavan was just her sixth time out in competitive action.

Joanne Blaire guided Richard Bourns’ Attagirl to third place on a score of 191.3. Bred by his late wife Deirdre Bourns, the mare is by Vigo D’Arsouilles out of the 1.60m mare MHS Attraction (Numero Uno) who is competed by Spain’s Sergio Alvarez Moya. Cooley Farm’s Ardmore Cooley (Tyson x Aldatus Z) placed fourth under Beth Burton on 189.2. The mare was bred by Mark Jacob.

Fifth place on a score of 175 went to Castle View Cheap Thrills, owned and ridden by Sarah Agnew. By Emerald van’t Ruytershof out of Carrickview Antioch (Beach Ball), she was bred by Dr John Haughey MRCVS. Agnew is also the owner of the horse that took sixth place, Castleconnell Candy Man (Sligo Candy Boy x Mermus R). Bred by Greg Clohessy, he was ridden to a score of 162.1 by Paul Devlin.