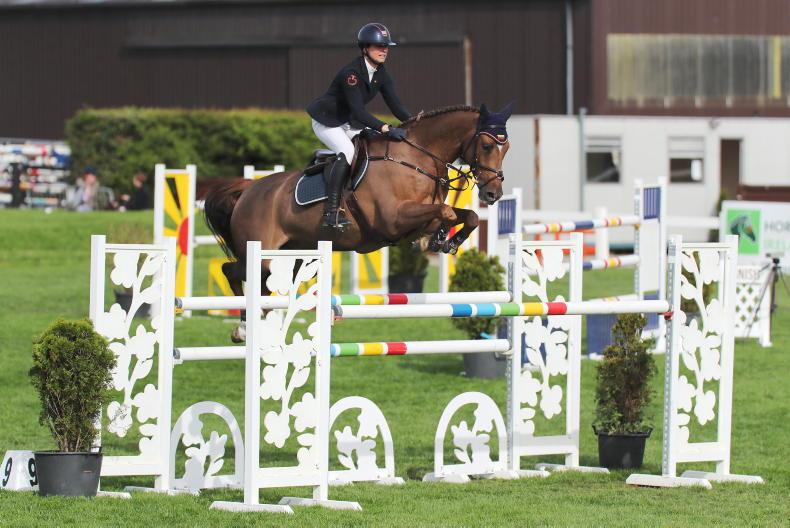 THE 2022 Mervue Equine Leinster Summer Tour got underway last week with Barnadown playing host to the first round on the Friday of their three-day show. As expected there was a big turnout, with 56 combinations going to post in the J Donohoe BMW-sponsored 1.35m class.

Only nine of the 56 managed to jump clear in the first round, while only two delivered a second clear against the clock.

Claiming victory was Dublin show jumper Ausra Clarke, who was riding the eight-year old Janco-V. The combination were the fastest of the clears in a time of 47.61. Owned by Gregory Clarke, the gelding is by Dakar out of the Zirocco Blue VDL-sired Dakarla-V.

The second clear of the class was delivered by Greg Broderick and his own eight-year-old Olivia De Muze N (El Torreo De Muze) in a time of 48.50.

Young rider Rhys Williams beat the target time when clocking 46.85 with Conthanga PS but it came as at a price as he had one on the ground for eventual third place. Williams also picked up the leading young rider prize of this round. This nine-year-old mare is by Conthargos out of the Grand Step mare Grand Ronja.

Fourth place was filled by Charlotte Jacobs when she also picked up four faults in the slightly slower time of 49.25. Bred by the late Harold McGahern, this nine-year-old gelding is by Aldatus Z out of the Cruising mare Rincoola Abu.

Lt. James Whyte wasted no time with Carrigoran but, with two poles on the ground in a time of 44.75, he had to be content with fifth place. This gelding, who was formerly named Chippison Junior, is by Chippison and out of Coille Mor Villa. Johanna Sixth finished sixth with a total of eight faults in a time of 50.98 aboard Incredible.

Winner of the overall 1.20m league last year, Deirdre Doyle got this year’s campaign off to a great start as she took victory in the opening round. Riding the ever reliable BLM Authentic Diamond, she clocked the winning round in 36.27.

She was chased home by Shane Moloney, who clocked 36.57 with the six-year-old Galilee Des Flagues. James Dunne took third place with Blurred Lines, when they came home clear in 37.26, ahead of amateur rider Vanessa Blair and ABC Cooley, clear in 39.21.

Fifth place was filled by Seamus Hughes Kennedy with the eight-year-old Castlefield Hera, clear in 40.29, ahead of DJ O’ Sullivan and the seven-year-old Baloys PS, clear in 40.76.

The 1.10m division saw 90 combinations battle it out and in the end it was a tie for the win. Young rider Wiktoria Starzak and Alfadaeo delivered a double clear in 30.75, as did amateur rider Michael Floody and Indella. Young rider Jazmine Arthur was third with All That Jazz, when clear in a time of 31.18.