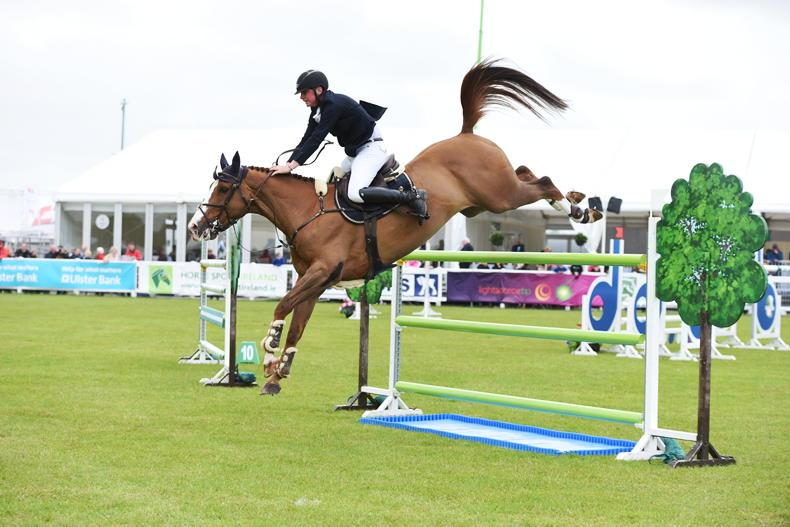 CNOC Rua Chinook, ridden by Jason Foley, took first place in the Gain/Alltech 1.40m Grand Prix which saw just five of the starting 25 combinations return a first round clear to battle it out against the clock.

Speaking after the class, Jason Foley said: “It was great to win the Gain/Alltech Grand Prix with my nine-year-old Cnoc Rua Chinook. He is by Pacino out of Cnoc Rua Lucy by Ramiro B.

“I was lucky enough here today. I was last to go so I got to see Damien (Griffin) before I went in and I noticed he was quick and quite tight everywhere so he didn’t leave so much for me.

“My lad is a fast horse, he’s quite quick across the ground and he’s not afraid to turn back tight to a couple of jumps so I can trust him to do all the things I ask of him. I was very lucky with the draw that I got, but he is exceptional against the clock so I would have been confident in him anyway.

“I got him last year, he was bred by Tara Coffey and is owned by Tara, Seamus Cadam and in partnership with Castlefield Breeding Farm. I’ve been producing him steadily throughout the year. We brought him down to the Sunshine Tour earlier this year and he went very well; placing highly in a couple of ranking classes.

“We came home and did a couple of the National Grand Prix and he was very good in them. He placed second in the two-star Grand Prix in Mullingar just a couple of weeks ago. He had a great result today. It’s nice to see him coming along, being produced well and doing it the right way. I’m looking forward to a great future for him. I also rode a very good seven-year-old mare we think a lot of named Balia Silvia (Balou Du Rouet - Sivio I) in the class.

“She jumped an amazing first round for her first time to jump in a National Grand Prix. We are really looking forward to this mare. We think she is something really special. We opted not to put her in the jump-off as we thought she had enough done.

“It is an exciting time for the Breeding Farm in partnership with Matteo (Delmiglio), we are producing 30 foals a year.

“This (Balia Silvia) is one of the first crop which we produced together seven years go and he is doing a fantastic job so far so hopefully the rest of the crop which are coming through will do similar things and there’ll be nice performances to come I hope.

“There was great excitement here today. The crowd seemed to get very involved in the jumping which was great to see. Especially for a show like this that’s only getting up and running, hopefully it will go from strength to strength on the back of this.

“There was a very good turnout. The surface was good, the quality of everything was up to standard so It was very good to see it today.

“Special thanks to Gain/Alltech and Joe Duffy BMW for getting behind this and making it happen, it’s great sponsorship and we are very lucky to have them.”

Foley added: “Next week is exciting for us. We are in the build up to the European Championships, my last in Young Riders so hopefully it will be a good one.

“I’m going with my good horse Clyde VA (Caretino - Quintero). He was very good last year at the Europeans, so hopefully we can go a few places better and come home with a medal both team and individual.

With Foley’s withdrawal of Balia Silva from the timed decider, just four went forward for the shortened course.

Lt James Whyte was the first to go aboard the Minister for Defence’s gelding Hawthorn Hill (Cardento - Limmerick). They had one fence down for four faults which would see them finish in eventual fourth place.

Next to go Edward Doyle Jnr riding Quick Bill (Flex A Bill - Quick Star) managed to keep all the fences intact in a cautious time of 46.38 for eventual third.

Damien Griffin and Breda Carroll’s Dutch-bred mare Hollywood (Zirocco Blue VDL - Phin Phin) were next. They too kept a clean sheet throughout, managing to spot the clock in a fast time of 41.96 to head proceedings.

Their lead did not last however, as last to go was Foley and Cnoc Rua Chinook. The duo once gain provided a fault-free performance and sliced almost two seconds off the target tie in 40.09 to snatch the victory.

The next and 16th round of the National Grand Prix league takes place in Balmoral today.