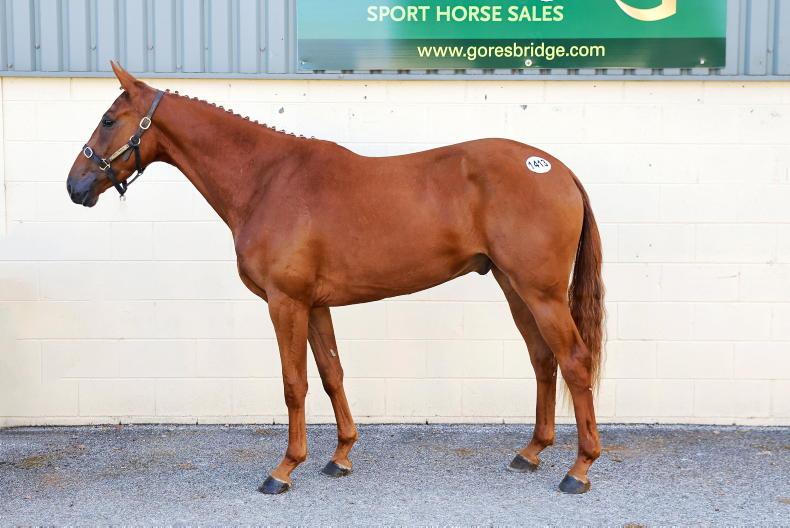 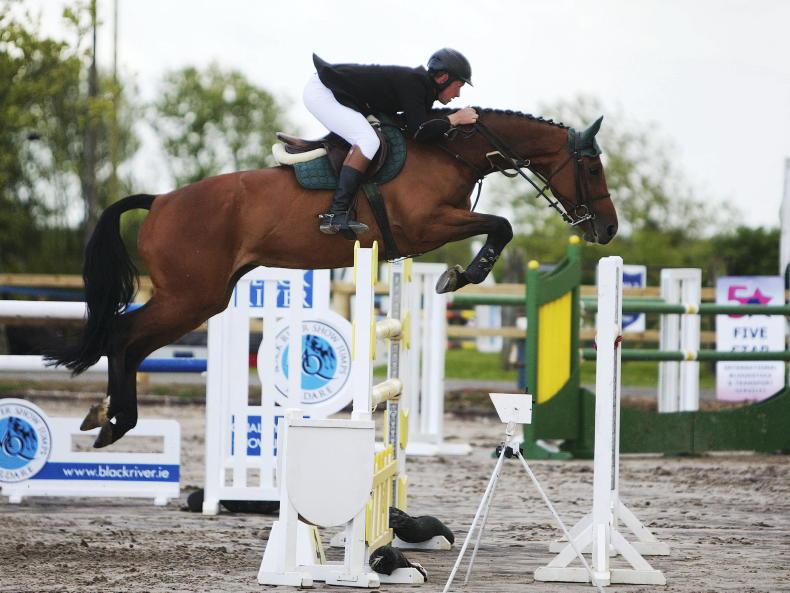 Mary Bolger’s Kilcannon Cavaquin, pictured winning as a seven-year-old in Mullingar, is the sam of Lot 23, Kilcannon Rockshore (by Darco) \ Ray Loftus Jumpinaction.net 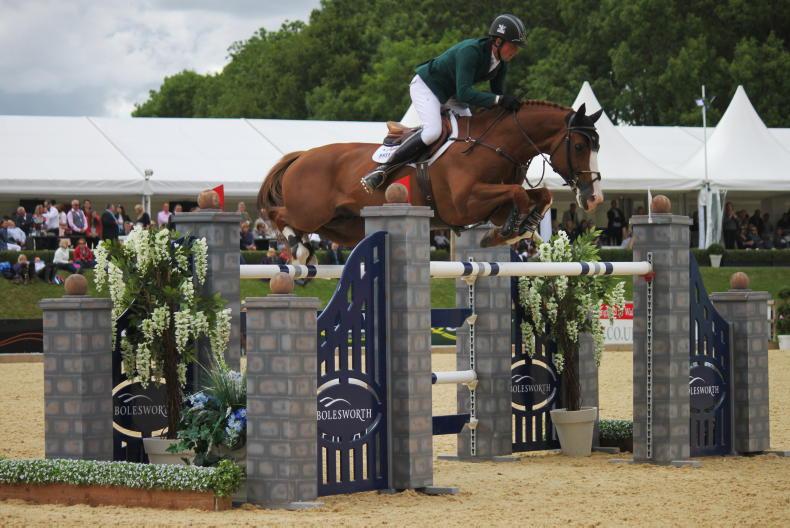 Lot 12, a gelding by Balou du Rouet is out of a full sibling to the 1.60m show jumper Oldtown KC, pictured with Trevor Breen
Previous Next

There are 26 lots catalogued (compared to 40 last year) of whom the vast majority are registered as Irish Sport Horses and half are home-bred.

As is so often the case with boutique sales, specialist producers have the correct model of horse to get through the selection process (carried out by Sally Parkyn and Alain Storme) and both MBF Sport Horses and Higgins Sport Horses have a trio of three-year-olds entered while Mary Bolger and James McEvoy have a pair apiece.

MBF Sport Horses’ first offering, MBF Golden Mix (Lot 5) is a chesnut gelding by Aganix du Seigneur and was home-bred by Brian Flynn out of the thoroughbred mare MBF Nora (by Milan) who comes from the family of the 11-time track winner Fedora. Registered with the Anglo European Studbook, MBF The Colonel (Lot 10) is a Toulon gelding out of the Iago C mare Nirvana d’Oc (CSI3*) while the Vivant van de Heffinck gelding MBF Keep Wondering (Lot 15) comes from the family of Bugatti (CSI5*) among others.

The Dutch Warmblood gelding Olivier (Lot 9), who is the first horse coming up from Higgins Sport Horses, is a chesnut Arezzo VDL gelding out of an Amadeus half-sister to Content (CSI2*, 1.55m). Oban (Lot 18) who is being sold in partnership with Charlene Kehoe and is also KWPN-registered, is a Harley VDL half-brother to the Zavall VDL mare Happiness (CCI2*-L) from the family of Eagel (CSI5*).

Between those two geldings, the Co Wexford operation consigns Cadiz BW (Lot 14), a dark bay ISH filly by Cornet Obolensky who was bred in Co Wexford by Ballywalter Stables.

Mary Bolger is selling Kilcannon I’m A Star (Lot 4) who qualified for the three-year-old loose jumping at last month’s Dublin Horse Show; this Big Star gelding is out of a Van Gogh mare out of a Highness mare.

The Co Wexford vendor is also selling the home-bred Kilcannon Rockshore (Lot 23) who is a Parco gelding out of Kilcannon Cavaquin (jumped to 1.40m level), a Harlequin du Carel half-sister to the Kroongraaf gelding JKF Vogue (CCI3*-L).

Co Down vendor James McEvoy will first be represented by Rathcash Kate (Lot 8) who was fifth in her three-year-old loose jumping final at the Dublin Horse Show last month.

The VDL Ard Douglas bay is out of a Coroner mare from the family of Shannondale (CSIO5*) and Ballintogher (CCI3*). Rosscarberys VIP (Lot 20) is a Quidam Junior I gelding out of a Coevers Diamond Boy half-sister to the Cruising gelding Youngstars Cheetah (CCI3*).

Better known as a purchaser at Goresbridge Horse Sales, the name Trade Horse Ltd appears sporadically as a vendor, especially in select sales such as this.

The Co Meath operation is consigning the Dutch Warmblood gelding Orion (Lot 6) who comes from the second crop of the young Comme Il Faut stallion Comthago and is out of an Indoctro mare who jumped up to 1.30 level.

Another KWPN-registered gelding in the sale is the final offering, Jack Geaney’s Othek Gun (Lot 26), a Dakar VDL half-brother to the Q. Breitling L.S. gelding Indendo (CSI3*) and from the family of Rarete (CSI4*).

The only grey in the catalogue is Joe Coffey’s unnamed home-bred Lot 12. This Balou du Rouet gelding is out of the traditionally bred Cruising mare Oldtown Sally K, a twin of Oldtown KC (1.60m) and dam previously of the Warrenstown You 2 gelding Cruise The Town (CCI4*-L). This is the family of Abbervail Dream (WEG-S and CH-EU-S). Lot 12, a gelding by Balou du Rouet is out of a full sibling to the 1.60m show jumper Oldtown KC, pictured with Trevor Breen

Another horse sure to stand out at the sale is GHS’s home-bred Lot 17. This black gelding is by Cormint, sire of the second highest-priced lot, and top-priced filly, at last year’s sale. He is out of the Cavalier Royale mare Penhaligon Cairo and is thus a half-brother to Van Thee Man (CCI4*-S) and GHS Calexico (CCI3*-S).

Last year’s top lot was a flashy chesnut with three and a bit white legs and one similar in this upcoming catalogue is Luigi De Lush (Lot 16) who is being consigned by his Co Tyrone breeder, Uel Little. From the second crop of the Aganix du Seigneur ISH stallion Echonix (now jumping at 1.30m level), this gelding is out of the Puissance mare Rosalina de Lush, a full-sister to Portly Ford (CIC3*).

Ben Hopkins’s BDH Harold is due to get the sale under way as Lot 1. This bay gelding by Vivant van de Heffinck is out of the Ars Vivendi mare Ard Vista, a half-sister to the Ard VDL Douglas gelding Trebra Douglas (CSI3*) and from the family of Leanorth Boom Boom (CSI3*).

Other lots in the sale by the Belgian Warmblood stallion, that have not been mentioned elsewhere are Elizabeth Ahern and Felicity Ward’s EPA Exclusive (Lot 11) who is out of a Fairman K mare out of a Cruising mare and Michael Griffin’s unnamed home-bred gelding Lot 21 who is a half-brother to the 2016 Celtic Hero BZ mare Rossmount Aldi Hero (CCI2*-S) and from the family of Good Lux Lucy (CSIO5*) and Greenacres Special Cavalier (CCI4*).

Two other home-bred unnamed geldings by Vivant van de Heffinck are due to appear towards the end of the sale, the first of them being Charlie Carter’s Lot 22, a half-brother to the OBOS Quality OO4 gelding Dartans Quality Brigade (CIC3*) and to the Courage II gelding Ballyquirke Tipp Top (CSI5*); this is also the family of Billy Cuckoo (CCI5*-L).

The other is Seamus Casey’s Lot 24 who is out of the Indoctro mare Doctros Delight. This bay gelding, who was second in the loose jumping at Millstreet and qualified for Dublin, is a half-brother to the 2015 Balou du Rouet gelding Thomascourt Ballypatrick who represented the ISH studbook at Lanaken last year and was back at the Belgian venue this week with the USA’s Charlotte Jacobs.

Other home-breds in the catalogue not mentioned elsewhere are Mairéad Lacey’s Rosconnell Tango (Lot 2), a chesnut gelding by Tyson from the family of Calgary Z (CSI4*-W), and Anne Murphy’s Ogue Eldato (Lot 3), an Eldorado van de Zeshoek gelding out of an Aldato full-sister to Alfurist (CSI4*-S) whose previous produce include the 2014 Cobra mare Ogue Ardkyle.

The only colt in the sale is John Murphy’s brown son of Winston (Lot 19). He is out of the Courage II mare Unanibeath, dam previously of the Puissance gelding SBH Big Wall (CCI3*-S).

There are just five fillies in Goresbridge Horse Sales’ select sale, among them Ballygriffin Into The Max (Lot 7) who is by Tyson out of a Chacoa mare.

The bay is being consigned by Evan O’Connor whose wife Storm could do with a fillip as she recovers from surgery having been kicked in the face recently by a young horse. Storm should have been competing at Ballindenisk this weekend on her three-star Chacoa mare, Ballygriffin Chacoa Power.

Brianne Stanley is selling the home-bred Mischief On My Mind (Lot 13), a Contendro I half-sister to the OBOS Quality 004 gelding Into Mischief (CCI3*-S). The pair are out of the Olympic Lux mare Savanna Twist who comes from the family of Astarte de Madeleine (CCI4*-S) and Nordico (CSI4*).

One of the few horses in the sale who has yet to have its name officially registered is Lot 25, Vincent Meaney’s bay filly by Celtic Hero BZ out of the Lux Z mare Wineport Dis N Dat.

Time: 2pm. All lots will be loose schooled in numerical order from 11am.