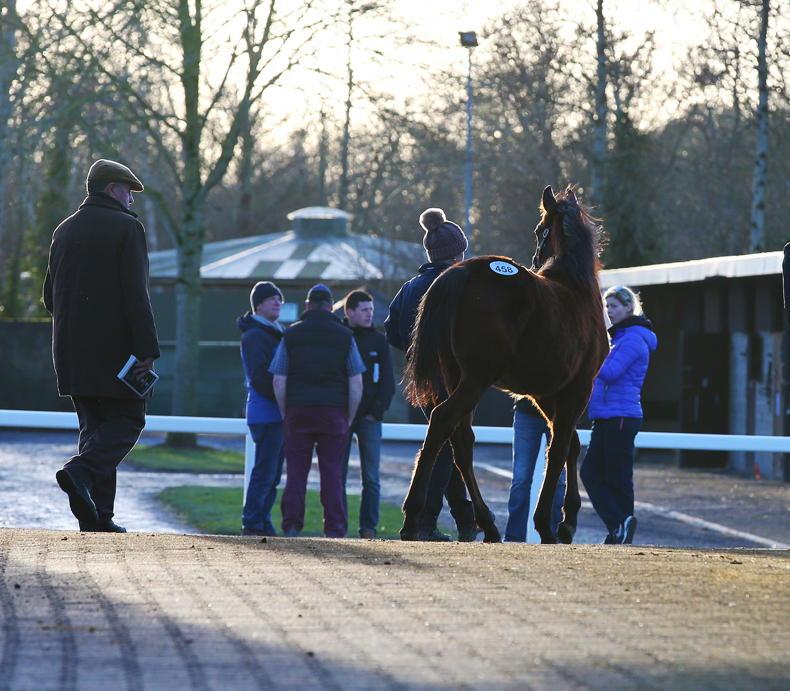 THE twice-raced French jumper Invincible Power held sway at €150,000 as the Goffs February Sale began its three-day run on Tuesday today with a varied session that served up some lively trade.

In further evidence of a return to normality the February Sale returned to its traditional slot after being forced to go online last year and the first day of the expanded sale kicked off with a selection of horses in training which was dominated by the aforementioned Invincible Power who will join Donald McCain after being snapped up by Sunday Racing.

A son of Great Pretender, Invincible Power was offered by Eamonn Phelan’s Derryluskin Stud after making two appearances in France earlier this season. The first of those outings yielded a third at Nantes in October before the four-year-old followed up with a fourth at Saint-Brieuc the following month.

“He is the first horse of ours to go to Donald McCain," declared Sunday’s Darren McGrath. "We were over there last week and it is a super set-up. He is a wonderful trainer and I think we are after finding the right horse. He is a lovely mover and I think he will end up looking cheap.

"I think he could be the first of many horses that we send to Donald over the coming years. We have built up a nice relationship with him and it is something that we will be looking to do. We really liked this horse’s temperament. He is the type of horse that carries himself well and when we went to see him nothing was bothering him.

“We looked at him yesterday and again this morning and he just seemed to be a very relaxed horse. He has size and scope and his form in France is good. Everyone is chasing horses with French form. We think he will do really well over the next few seasons,” he concluded.

Trade at the head of the market was underpinned by a number of offerings from the late Sheikh Hamdan Al Maktoum’s Shadwell empire.

Foremost among these was a two-year-old son of Teofilo who cost €135,000. A grandson of the champion American mare Fleet Indian, this colt was knocked down to Clare Manning who was seated with her grandfather and legendary trainer Jim Bolger.

The Shadwell draft also featured a popular Teofilo filly for whom former trainer Patrick Prendergast had to go to €80,000. This filly is out of a listed and Group 3-placed mare whose family goes back to the high-class Muhtathir.

“I’ve bought her on behalf of a client and she will go into training with Kevin Prendergast. She’s a lovely filly from a good family and the client was looking for a filly with the potential to race and then go to stud and she fitted the bill. Hopefully she’ll be lucky,” remarked Prendergast.

Shadwell also offered a daughter of Dark Angel for whom Sam Haggas, bidding online, had to go to €68,000. This filly is out of a winning own-sister to the high class Dubai-based sprinter Ertijaal.

The day’s top-priced weanling was a colt hailing from the first crop of the Group 1 Prix de l’Arc de Triomphe hero Waldgeist who cost German-based agent Ronald Rauscher €85,000. Ballylinch Stud, where the sire resides, offered this son of the multiple listed winner Modeeroch.

“He is very nice, not exactly a pinhooker's foal, but he is for an end-user in Germany, so he is going back to the home of his ancestors,” declared Rauscher. “He has a very good demeanour and a very good step to him, which I liked a lot. He has a nice frame and is an excellent advertisement for the sire and well presented by Ballylinch, needless to say. The page is strong so basically he had it all and I hope he is going to be lucky.”

A Dark Angel yearling out of a Group 3-placed runner in France cost Ross Doyle €82,000 and the agent reported that his purchase was bought to race on behalf of Najd Stud.

Among the most popular yearling lings on offer was a €70,000 son of Cotai Glory who numbers the Matron Stakes heroine Champers Elysees amongst his siblings. Tally-Ho Stud signed for this son of their resident sire who enjoyed a good time of things with his first runners in 2021.