Ryan McElligott reports from the third day of the Tattersalls Ireland November National Hunt Sale, where a Poet's Word colt foal made €85,000 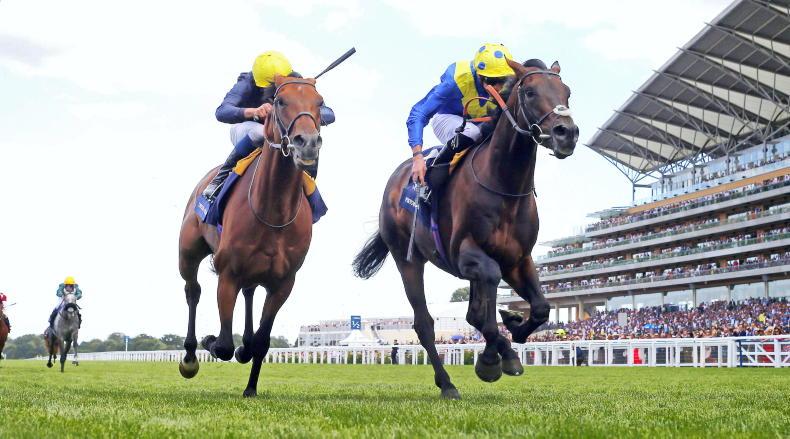 An €85,000 colt from the first crop of Poet’s Word emerged as the leading light on day three of the Tattersalls Ireland November National Hunt Sale when selling to Joey Logan on what was another strong day’s trade.

The figures from the second day of foals from last year’s sale set a daunting standard but Tuesday’s session duly measured up by producing an improved aggregate of just over €5 million while the median progressed from €19,000 to €20,000. The average for the day was marginally down on last year while the clearance rate came in at an impressive 83%, two points shy of 2020.

The session topper was sold by Mountain View Stud and he is the most expensive representative to date to come under the hammer by his Group 1-winning sire and Boardsmill Stud resident. As well as being a standout representative of a sire whose progeny have gained a significant amount of traction this week, the top lot is out of a quality racemare in Dinaria Des Obeaux who won at Grade 2 and Grade 3 level during her time with Gordon Elliott.

“I’m a huge fan of the sire. All of them by the sire really seem to get their heads down and walk. I saw a lot of them earlier in the year and thought they were nice.

"This is a lovely colt, out of a very good race mare and we’ll see how this horse comes along but he might not come back for resale and we might instead put him into training but we don’t have to rush into any decisions on that front,” said Logan.

The first crop of foals produced by the King George winner Crystal Ocean have made quite an impact so far this week and the Sea The Stars horse was responsible for several outstanding individuals who played a central role over the course of the day. These included an €80,000 colt from Hillview Stud who was snapped up by leading agent Aiden Murphy. This colt is out of a half-sister to the likes of the Grade 1-winning Pingshou and the Grand National runner Magic Of Light.

“The sire is producing very good-looking stock, I’ve seen a number of them already. This colt is a nice type with a good walk and he will be coming back as a three-year-old,” reflected Murphy who later went to €80,000 for another son of Crystal Ocean offered by breeder Oliver Loughlin.

Another Crystal Ocean to capture the imagination was a €70,000 colt out of a winning half-sister to the great Hurricane Fly whose exploits are such that his legacy will live on for many decades. Agent John Kilbride was on hand to secure this Yellowford Farm offering.

“My thinking about Crystal Ocean is this, when the best horse in the world retires straight to National Hunt, then you have to take note,” observed Kilbride.

“This colt isn't massive, but neither was Hurricane Fly, so that helps. As action goes, I think he has the best action in the sale. He will come back for the Derby Sale and has been bought for a client in England.”

Murphy also set the pace through the first half of the day when forking out €70,000 for a son of the red hot Walk In The Park whose siblings are headed by the Paddy Power Chase winner Roaring Bull.

“He’s going to be back for sale as a three-year-old, I’ve bought him for an Irish client. He’s just a very good looking, good walking colt and the mare has already produced a very smart horse,” stated Murphy after signing for the Thistletown offering.

Also destined to return for the summer store sales in 2024 is a Walk In The Park colt related to Many Clouds and The Tullow Tank who cost Tom Whitehead €66,000.

As well as purchasing the day’s top priced foal Joey Logan also signed for a €67,000 Soldier Of Fortune colt out of the Lancashire Oaks winner Turbo Linn. Ballincurrig House Stud sold this grandson of Galileo on behalf of his breeder Cathal Ennis.

One of the most intriguing lots on offer was a colt by the Saint des Saints horse Goliath Du Berlais who is being represented by his first foals this year following a racing career that yielded multiple black type victories over jumps in France. The sire has just two foals to represent him this week and the first of them, a son of the French Grade 3 scorer Martalette, cost Michael Fitzpatrick’s JC Bloodstock €68,000.