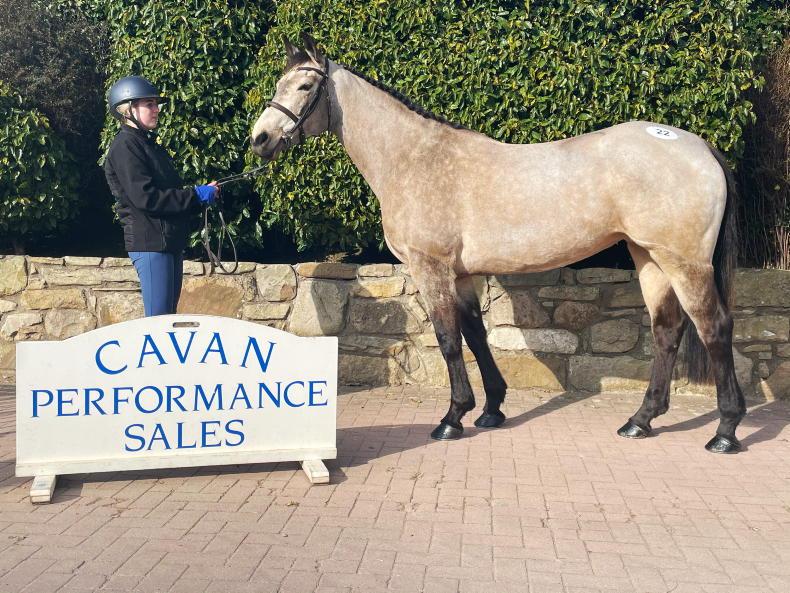 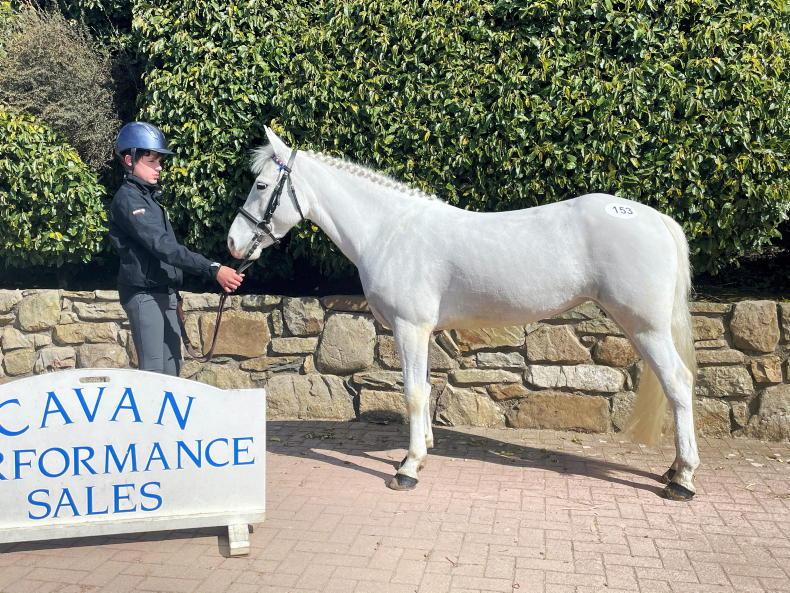 Selling at the start of the opening session, the attractive dun mare realised a heady €23,500 and was one of 13 five-figure returns overall. The lively performance trade resulted in another good clearance of 77% while the average closed at a healthy €6,673.

Closing the proceedings, Irish Draughts and young sport horse stock may not have reaped the same rewards but were also well attended.

The bulk of the top returns fell to horses and ponies with mileage, and especially those that were deemed quiet to ride. Online and telephone bidders were active throughout and, contesting those on the ringside, hailed from Denmark, Finland, Germany, India, Luxembourg, Sweden, USA as well as from the UK and Ireland.

“The trade is holding up well,” stated Cavan’s Stuart Clarke. “We wondered if the troubles in the world may have had an impact, but we had two days of good clearances, together with strong averages. The ponies were very lively again, and appear to be in high demand.”

“Good ponies are scarce,” commented sale-topping vendor Sean Hynes, and indeed it seems so as bidding for the sale-topper rocketed up to a very healthy €23,500.

The seven-year-old 148cms jumping pony (Lot 22) had clocked up 39 SJI points, and would have earned many more had it not been for the pandemic restrictions. “She hasn’t competed since late in 2019, and only came back into work quite recently,” revealed the Westmeath-based owner/breeder.

It was Jennifer Torrens who was charged with the recent production, and in Hynes’s words “the mare gave an exhibition of jumping for the livestream.”

Attractively bred, Agharanny Chloe Clover is by Boherdeal Clover out of a Connemara mare by Poetic Justice. “The late Ruth Rogers found the dam for me in Sweden,” added Hynes. “I was looking for a mare by Poetic Justice, and through Ruth, I was able to lease her. I have had two progeny from her and have retained her older sister who now has 139 jumping points.”

The successful buyer, who bid by telephone, was Barry Davis from Cheshire. He was sourcing the pony for his granddaughter Sienna, and although had not seen the mare in the flesh, knew of her through her rider Jennifer Torrens.

“I saw the videos and really liked both her quality and her way of going,” he said. “I had hoped to pay a little less, but if you want something nice you have to pay for it.”

The 12 year-old had been in Meaney’s ownership since a three-year-old and, by Balou du Rouet out of Hillside Adella (Albinor), is a half-sister to the Oliver Townend CCI3* winning event mare Miss Cooley.

A 1.40m campaigner, she took park in the sunshine tour last year, and was knocked down to British-based rider Nicole Brennan.

As the professional yards continued to reap the rewards, Co Kilkenny-based veterinary surgeon and producer Diarmuid Ryan did notably well with the sale of his own Tullabeg Buzz (Todd), by Tullabeg Fusion, for €20,000.

Initially led out unsold but snapped up privately shortly afterwards, the seven-year-old dun (Lot 78) had clocked up a smart eventing record under Sarah Ennis, winning 16 Eventing Ireland points and placed fifth in the prestigious CCIYH2* at Millstreet last June.

“He’s a very good jumper,” stated Ryan. “If he hadn’t made that price, I would have kept him and campaigned him in the age classes this year.”

Norfolk-based show horse and jumping producer Katrina Hurst was the lucky buyer for this smart lot who, bred by stallion owner Nicholas Cousins, will proably be aimed down the latter route.

Topping Thursday figures at €15,500 was Peter McEneaney’s Shanalux K (Lot 181), an experienced 11-year-old mare with 164 SJI points under her belt. Kitty Shanahan bred this performer who, as her name suggests, is a daughter of Lux Z out of Cornstown Ebony (VDL Douglas). Agent Robert Harrison signed the docket for this seasoned mare, on behalf of Indian client Vidgh Rastogi.

Joining the prominent older individuals on day one was Enda McKiernan’s Creaghduff Maggie May (Lot 54), a full Irish Draught mare by Young Carrabawn out of Wild Grey by Merry Mate. A veteran of four seasons following the Glasson Farmers Hunt, this 10-year-old had also clocked up 12 SJI points and was secured by Finnish buyer Kitka Suomio for €13,500.

Among the remaining five-figure prices on Thursday was Ian Fielding’s continentally bred Dior R and D A (Lot 200) a six-year-old gelding by the ever popular VDL Douglas out of the well related La Cassia (Landor S).

Quietly produced to show jump, he was knocked down to Denise Wirth from Germany at €12,100.

Nineteen of the four-year-olds changed hands over the two sessions, and while the trade was certainly less vibrant than it had been for the older stock, several sold well.

Heading the group at €10,600 was Ollie Ward’s Ardragh Patriot (Lot 125) who was snapped up by Co Wicklow producer Daisy Duggan. A catalogue stand out on paper, this gelding was by the well-bred young jumping prospect Ardragh Me O Moy (Aganix du Seigneur) out of Ardragh Duchess (Guidam). Home-bred, he was well related on both sides of his pedigree being from the immediate dam’s line of of Ardragh Cool Touch (1.40m), Ardragh Dancing Queen and Ardragh Mountain Dew.

In two lively morning sessions, a smart selection of ponies found new homes, at prices ranging from €1,100. Two made in excess of €10,000 and, sale-topper aside, the next in line at €14,250 was Declan Hynes’s Oyster Catcher (Lot 41), a seven-year-old full Connemara mare by Derrymore Duncan.

A catalogue pick on paper, and the winner of 115 SJI points to date, she was, according to a her vendor, ‘a dream of a pony’ who was sadly for sale as Hynes’s daughter Saoirse is out of the pony ranks.

Co Galway trader Tiernan Gray was at ringside to account for this smart mare, who was bred by Nichola Dylan out of the good broodmare Chaercrea Misty (Drimcong Owen).

The two days closed with a small collection of Irish Draught and young sport horse stock. Sharing the top spot in the former at €5,750 was Mary McCloskey’s home-bred four-year-old gelding (Lot 241) by Beechmore Silver Crest (dam by Ard Grandpa) and also her subsequent offering, the five-year-old colt (bred by Martina Mulhern) by the same sire out of Aimee May (Westmeath Lad).

The eight lots sold in the youngstock division were headed at €3,100 by Tony Madden’s yearling colt by Lucky Luck out of Lady Millbrook (Vancouver).