Just one final step...
You must confirm your email address by clicking on the link we’ve sent to your email address.
You are only one short step away from reading 5 free Field+ articles.
ROYAL ASCOT: Russian Emperor rules as Moore hits Royal Ascot 60

A STRONG run in the final furlong saw Russian Emperor (100/30) get up and deny Queen Elizabeth’s runner First Receiver (9/4 favourite) by half a length in the Group 3 Hampton Court Stakes over a mile and a quarter.

Russian Emperor was a second winner of the week for both trainer Aidan O'Brien and jockey Ryan Moore, following the success of Circus Maximus in yesterday's Group 1 Queen Anne Stakes. It was also a landmark 60th success at the royal meeting for Moore.

Moore said: "He is a lovely colt, straightforward and with a good attitude, he has had the benefit of a couple of runs this year and let us see if he will keep progressing. He has a very good pedigree - his dam was exceptional in Australia."

Asked about the Derby, he said: "That will be decided. He will give himself a chance to stay, anyway."

And on achieving a 60th Royal Ascot winner, he said: "You wouldn't really give it any thought, would you?"

Frankie Dettori said of the runner-up: "First Receiver ran a bit fresh, but he ran a super race."

Andrew Balding, trainer of the third Berlin Tango, commented: "Berlin Tango ran very well with a penalty. He will go to the Dante next. A mile and a quarter is his trip." Hukum makes it four so far for Crowley

ROYAL Ascot 2020 just gets better and better for jockey Jim Crowley, who rode his fourth winner of the week when delivering Hukum (12/1) with a perfectly timed challenge to take the mile and a half King George V Handicap by half a length from 9/2 joint-favourite Kipps. It was also a fourth win of the week for owner Hamdan Al Maktoum while it was a first ever Royal Ascot success for trainer Owen Burrows.

Owen Burrows said: "Hukum has always been a horse we have liked. He does enough at home without blowing you away. He was due to run at Newmarket a couple of weeks ago, but I wasn't quite happy with him. I just thought we will forget it and I took him to Kempton last week and he worked as well as he had last year.

"Off 90 I thought we would come here. It is a big step up for a horse who has only had a couple of runs, but he travelled nicely and stuck to it well.

"Jim said he was slightly lugging left, but he can do that a bit. I don't think Hukum overdoes himself, he only just does enough and when Kipps came to him, he just kept at it.

"Hukum has got the profile and the breeding to be better than that. I am sure he will get further, he travelled well there.

"I am sure we'll have a think about it (the Derby), and we'll go back and have a chat with Sheikh Hamdan, but as Jim said there, he is still very inexperienced. He just said he was lugging left a bit the majority of the way around so whether or not he will handle Epsom, we will see

"As a kid and when I was battling around Fontwell and Plumpton 20 years ago, I would never have dreamed I would be here training a Royal Ascot winner for someone like Sheikh Hamdan. All thanks to him for having the trust in me to do the job. I was very fortunate to have had a great grounding at Sir Michael Stoute's where I was around good horses and you can pick up plenty."

Jim Crowley commented: "Hukum has a lovely pedigree, and he is bred to stay. We threw him in at the deep end today, but he did it nicely. He got a lovely sit round, box seat, and when the gap came he took it nicely, probably idling enough in front

"Here you have to let them rock on down the hill to get a position. We needed to get a breather into him at some point and I was quite glad that they did. We were lucky to get the splits when we did and he quickened up well.”

Asked about his four winners so far at the meeting, he said: "Touch wood - hope it keeps going! I have got some ammunition, which always helps. We had a good team coming here, so I would have been disappointed if we didn't have a winner."

Trainer Hughie Morrison said of the runner-up Kipps: "I think he is a group horse beaten by another group horse.

"When he gets to the front, he just seems to stop a little, but he has run really well." QUEEN Elizabeth may be missing for the first time in her reign, but Tactical (7/2 favourite) handed her a 24th Royal Ascot success when taking the Listed Windsor Castle Stakes. It was a sixth Royal Ascot success for trainer Andrew Balding and a 15th for jockey James Doyle, who was recording a 26/1 double following the earlier success of Lord North in the Prince of Wales's Stakes.

Tactical, a homebred son of Toronado, had shaped promisingly when third on debut at Newmarket on June 4th and showed the benefit of that experience when staying on well for a length and a quarter victory over Yazaman (20/1).

Andrew Balding said: "Tactical was showing a fair bit at home before we ran him first time out. James gave him a lovely ride today, but we were quite hopeful, especially when it looked like the draw was more of a help than a hindrance.

"He would have been, for me, ready to run in April, which is very early for one of mine. He has got a great attitude and is very professional. It is obviously a huge thrill for all of us to have a royal winner at the royal meeting. I feel very lucky.

"I think he will be better over six furlongs, and we stuck at five because we thought the Coventry Stakes would be a much stronger race, but he will certainly be going six furlongs and looks up to Group class, anyway."

Balding was asked how communication with the Queen regarding her horses works. He replied: "With the routine stuff it is obviously John Warren (the Queen's racing adviser) we deal with, but on a raceday we tend to give her a ring in the morning and tell her our thoughts, which I did this morning, so she was well-informed. She will be thrilled, I am sure!"

James Doyle said: "It was a straightforward race. I was a bit concerned about the draw and could foresee a few traffic problems if he didn't begin quickly. But testament to Tactical, he took it all in his stride, he jumped the gates very quick. I got a nice lead from Oisin and he actually stayed off the rail, which helped me. I kept things simple and was conscious about not getting to the front too soon on a horse who is inexperienced.

"A runner in the centre of the field kicked for home and that took me out of my comfort zone for a few strides, but a furlong down I knew I would get him and I knew his last furlong would be his best furlong. Oisin sees him as a six or seven-furlong horse going forward, so he has performed with a lot of credit today." DAY two of Royal Ascot concluded with a comfortable success for Fujaira Prince in the 14-furlong Copper Horse Handicap.

The six-year-old grey was making his first appearance since coming home third in the Duke of Edinburgh Handicap at Royal Ascot 12 months' ago and stayed on resolutely for a three and three-quarter length over Selino, justifying 3/1 favouritism.

gave Fujaira Prince a great ride. It looked a tricky draw beforehand, but he was intent on getting out and getting into a position. They didn't go that quick so he could get over and sit second one off the fence.

"He got the horse in a good position, a no excuse position. The rest of it was pretty straightforward and he quickened up well in the straight.

"Fujaira Prince is quite a delicate horse, who is lightly-raced for a six-year-old. A great team at home have been working with this horse for a long time now. This has rewarded their patience and the owner Sheikh Mohammed Obaid - he has given him a great day today.

"The obvious race that springs to mind is the Ebor. We will see how he is tomorrow, see what else we fancy and what Sheikh Mohammed Obaid wants to do.

"I think he will stay further. Our next step last year before he had a setback was to go back up in trip and I think he is a horse could stay two miles.

"It is very strange circumstances. We are missing everyone being here, the atmosphere, the owners and the public. It is what it is. I think we are all understanding of the situation and I think the fact that we are racing, a lot of credit must go to everyone.

"Our third week back racing, the participants and people behind the scenes have done a great job of getting the show back on the road. God willing, we will be back to normal next year."

It was a seventh Royal Ascot success for Andrea Atzeni: "That was the plan - we were very keen to jump and go forward and get a good position. We thought he would stay. It was one of those things - when you're drawn that wide, you have either got to go on and take a risk, or drop out and hope for the best, but we didn't want to do that because we knew the horse would stay and we wanted to give him every chance.

"He is not a flashy horse, he just does enough. It was a great training performance; he hasn't run since this meeting last year. He has had his issues and is very lightly raced for a six-year-old, but if he stays sound, touch wood, he could be a horse we can have a lot of fun with. 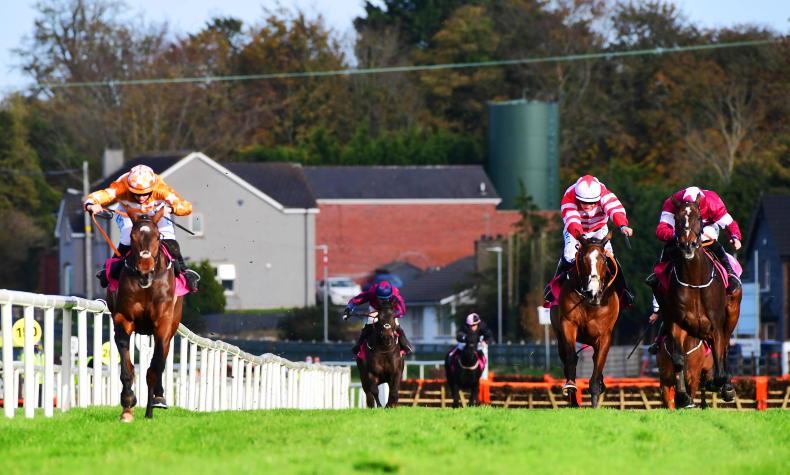 Inside Racing
DOWN ROYAL FRIDAY: Tower stands tall to fight off rivals in WKD
By Ryan McElligott on 30 October 2020
Field + 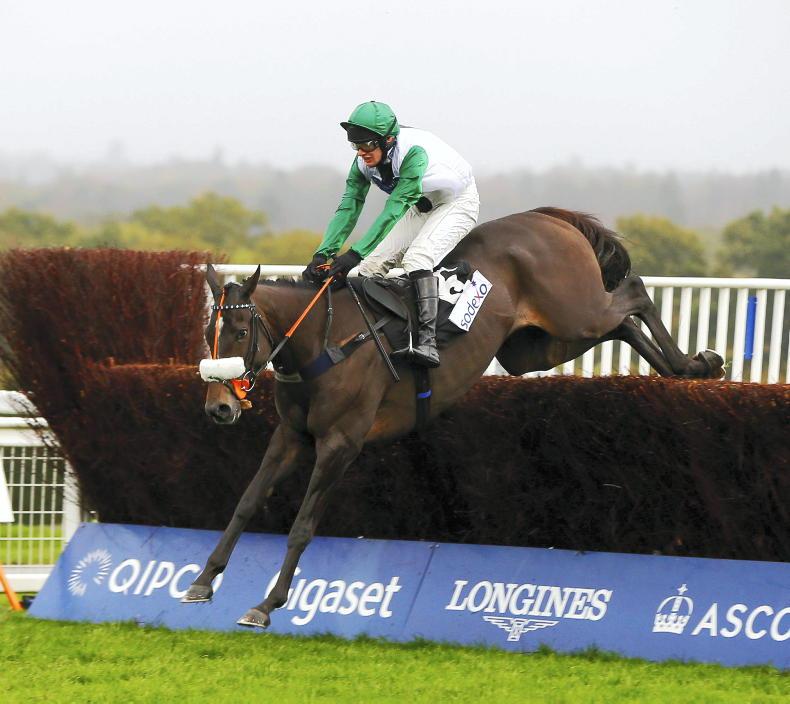 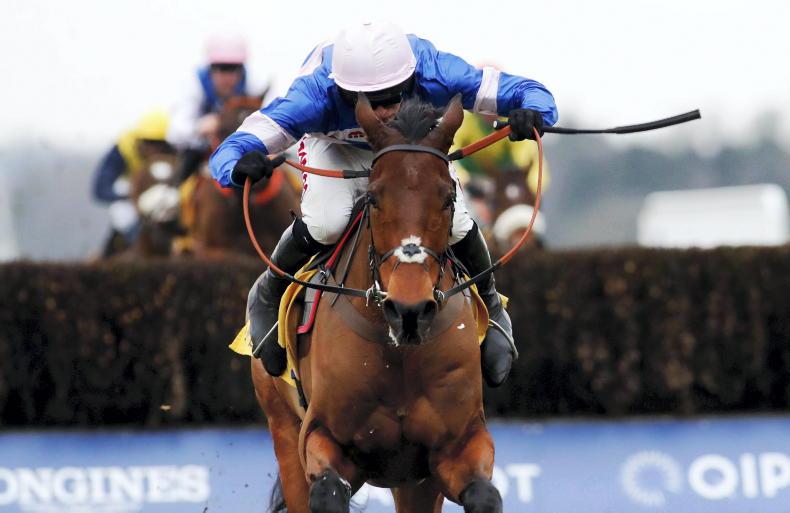 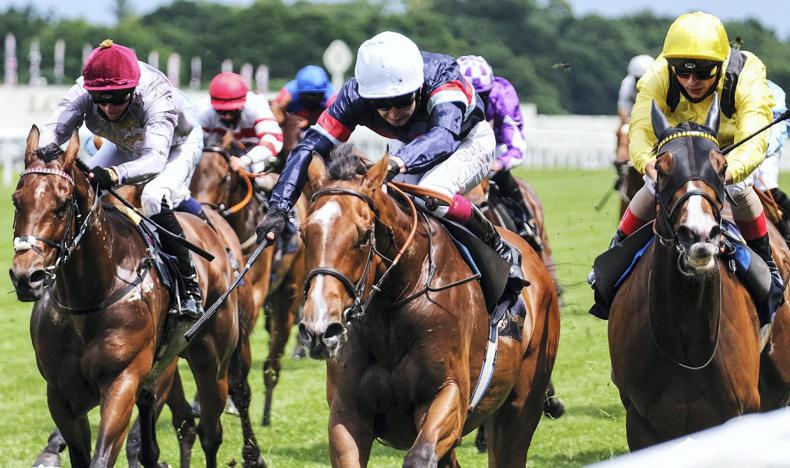 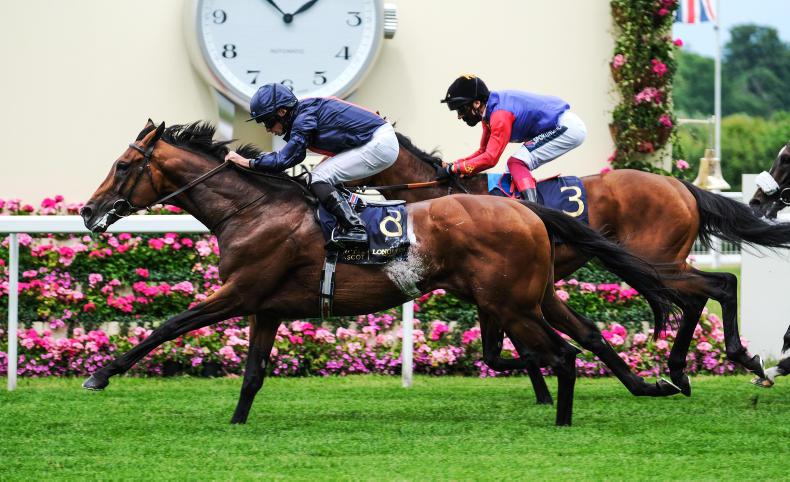 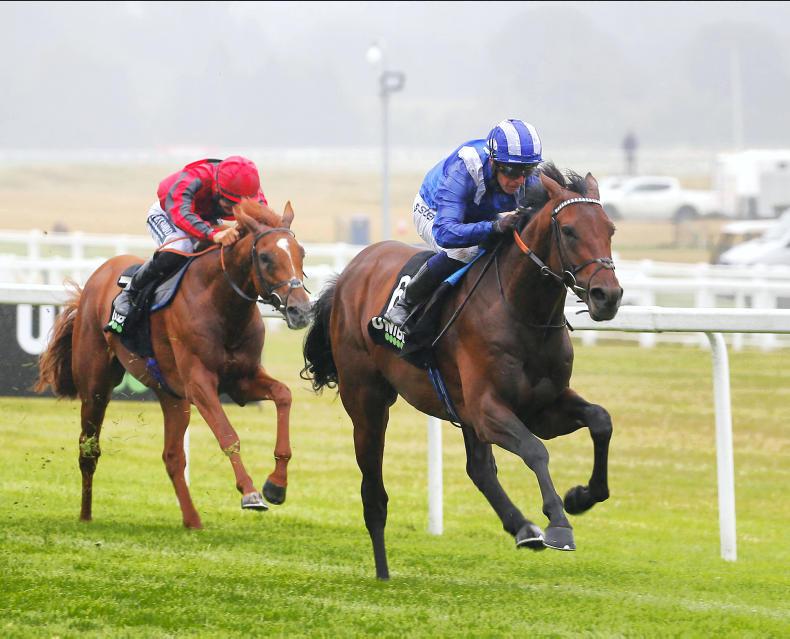